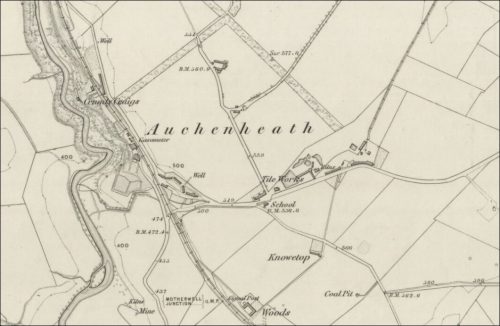 21/09/1870 – Glasgow Herald – Brick and tile work to let on the Hamilton Estates. To let, Auchenheath brick and tile works in the parish of Lesmahagow for such a number of years as may be agreed upon. The work is in excellent condition and is capable of producing a large make of bricks and tiles for which there has been a large demand. The clay is of an excellent quality and unlimited quantity … Hamilton  19/09/1870 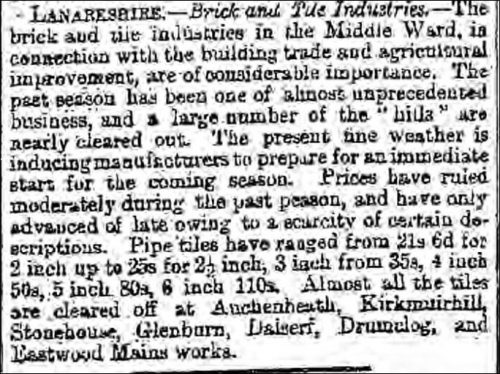 16/07/1892 – Lanarkshire Upper Ward Examiner – On Thursday last, a working man named Abbot was accidentally drowned in a pond at Auchenheath brick and tile works. It appears he had been standing on a plank along with another man when the plank gave way and both fell into the water. The other man got out all right but Abbot was dead although his body was recovered almost immediately.

07/08/1894 – Edinburgh Gazette – To the creditors on The Sequestrated Estates of James Baird, Junior, Brick and Tile Manufacturer, Auchinheath Tileworks, Lesmahagow. By virtue of an Order by the Sheriff-Substitute of Lanarkshire, James Baird, junior, above designed, hereby intimates that he has presented a Petition to the Sheriff of Lanarkshire at Lanark, to be finally discharged
of all debts contracted by him before the date of the Sequestration of his Estates, in terms of the Statutes. Wm Stoddart, Writer, Hamilton, Agent for Petitioner. Hamilton, 3rd August 1894. 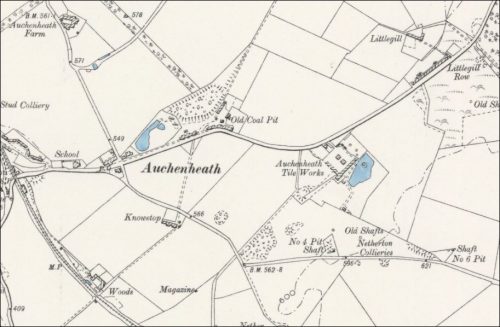 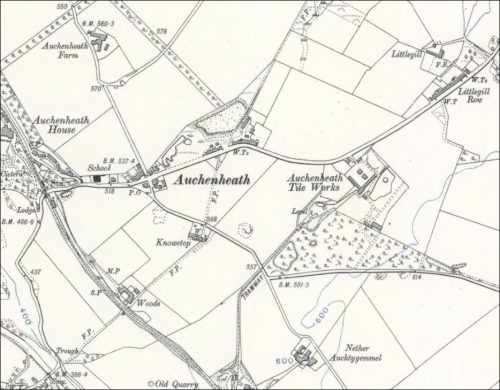 Below – 21/02/1914 – Hamilton Advertiser – Fire at Auchenheath Brickworks owned by the Clydesdale Brick and Quarry Company Limited. 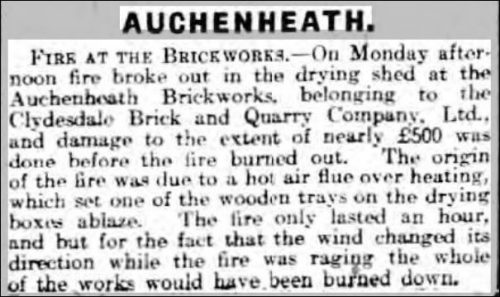 Below – 21/02/1914 – Carluke and Lanark Gazette – Further info on the fire and description of the drying sheds. 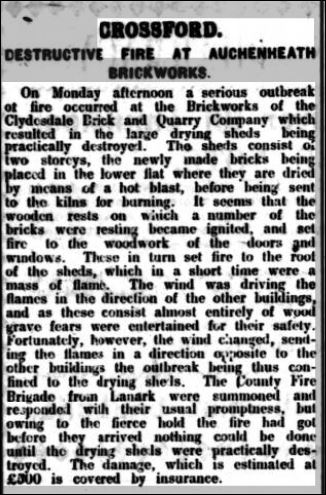 22/04/1916 – Hamilton Advertiser – Stallion parade at Hamilton Fair … A third exhibit was the fashionably bred Clydesdale stallion “Alpha” the property of Mr Arch Brown, Tileworks, Auchenheath. His sire was “Sir Galahad” and his dam “Nancy Queen”. A fine promising three-year-old colt,  “Alpha” is a good quality horse with nice straight black hair, although he was a little back in condition when shown yesterday. He was a first as a foal and a yearling at Lesmahagow Show.

15/07/1922 – The Scotsman – Blackwood Estate – Having received instruction from Col J.C Hope Vere, his portions of Blackwood Estates have been sold. Auchenheath Farm, Quarry and Coalfield to the Clydesdale Brick and Quarry Co.

29/03/1946 – West Lothian Courier – Death of Mr John Finlay, managing director of United Collieries Ltd. The death occurred at his residence Wyndwood, 38 Glasgow Road, Uddingston on Tuesday of Mr John Finlay, managing director of the United Collieries, Ltd. Mr Finlay had been indisposed for two or three months over the new year period but recovered sufficiently to enable him to return to business a few weeks ago. He visited the offices and works of the company at Bathville as recently as last Thursday but became ill again and in the end, his death came somewhat suddenly. A native of Law, Lanarkshire Mr Finlay started work as a pit bo in the district and from the first, he showed himself to be of a studious disposition. As a result, he steadily worked his way up until be became manager of Kingshill Colliery, owned by the Coltness Iron Coy., Ltd. Later he was appointed manager of the Edinburgh Collieries, Ltd, a position which he held for nearly ten years. Mr Finlay joined the United Collieries, Ltd., as general manager, in 1927, and ten years later became managing director of the Company. A past president of the Mining Institute of Scotland and a representative on the Council of the Institution of Mining Engineers, he was a well known figure in the coal trade and was regarded as one of the leading personalities in the industry in Scotland. Mr Finlay was also well versed in the pipe and brick making industry, and only a short time ago he launched a new scheme for tile making. Under his direction, a new work was built at Bathville, Armadale for the making of glazed tiles and slab fireplaces and it is a tragic circumstance that he has not been spared to see in full production a venture which was a striking example of his initiative and enterprise. Lately, he was also instrumental in the taking over, by the Company, of a drain tile work at Auchenheath, Lesmahagow.  Actively concerned in various branches of the industry to the very end, Mr Finlay took a deep interest in and was a source of much encouragement to young mining students who sought to pursue the study of the science of mining and to them his own experience was of invaluable assistance. He was deeply interested, too, in the welfare schemes associated with the industry, while the interest he also manifested in the activities of other social organisations was recognised by his appointment, by several of them. as honorary president. A keen sportsman, Mr Finlay’s favourite pastime was golf. He also interested himself in football, with Celtic F.C. as his favourite club. He had a wide circle of business associates and friends who held him in high regard. He paid frequent visits to the Company’s offices at Bathville and was highly respected in the Armadale district. For several years, Mr and Mrs Finlay with their family, resided at Bedlormie House, near Blackridge, but took up residence in Uddingston some years ago. He was 60 years of age and is survived by his wife. a son (Dr Finlay) and four daughters, to whom deep sympathy has been extended in their bereavement

Background – Valuation rolls list John and James Baird as proprietors of Kirkmuirhill oil works, which appeared to share a site with a brick and tile works and was operational for a few years during the 1860s. The Bairds seem also to have been owners of Auchinheath tile works, about a mile distant, and therefore may have been involved in the operation of the Auchinheath oil works.

Census information shows that John Baird was a master tile-maker, born in Tillicoultry, who operated various works before settling in the Lesmahagow area. One of his sons, James, followed him into the business. Interestingly John Baird is described as oil and tile manufacturer in both the 1871 and 1881 census; whereas valuation roles suggest that oil production at both Kirkmuirhill and Auchinheath had ceased by 1870. Presumably, the retorts used were small scale affairs, perhaps sharing a heat source with brick and tile kilns?

(Note – SBH – The following info was sent to me and I have recorded it here meantime. Not all the info may be relevant to this page).

Census data – It is difficult to determine precise addresses from census entries, however, a reference to adjacent household schedule numbers suggest that “West End Cottage” lay the village of Kirkmuirhill, and that “Brickwork Cottage” lay in Auchinheath.

While the above John and James Baird seen likely to have been proprietors of Kirkmuirhill Oil Works, the census reveals other members of the Baird family active in the local brick and tile trade.

Below – These 3 drainage tiles were found on Auchenheath Farm. They are most likely to have been manufactured at the Tileworks which was based very nearby. 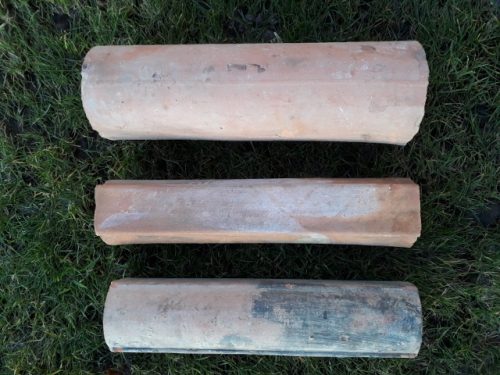 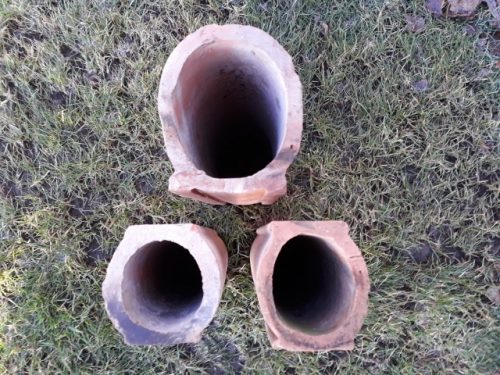 Below – An unmarked brick also found on Auchenheath Farm. This was also most likely made at the nearby Auchenheath Brick and Tile Works. 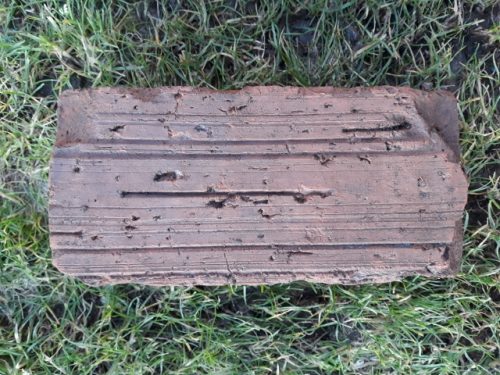