16/11/1936 – Letter from The Dundee Brick & Tile Co Ltd to Bennet & Sayer Ltd regarding production contract and number of bricks per hour.

23/11/1936 – MS240/5 – Letter from The Dundee Brick & Tile Co Ltd to Bennet & Sayer Ltd re receipt of sample bricks. The rear is annotated with handwritten pencil notes regarding the temperature of the brick fire.

20/03/1935 – Dundee Evening Telegraph –  Site being cleared at Inchture for new brickworks. To be operated by The Dundee Brick & Tile Co Limited. 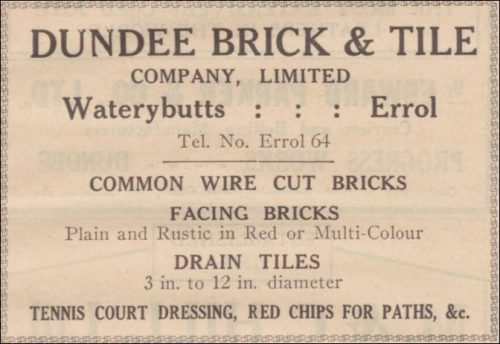 16/11/1936 – Dundee Courier – Fire at Errol Brickworks – Signalman gives alarm from the cabin – Dundee brigades 12-mile journey – The new brickworks at Waterybutts, near Errol, were the scene of an alarming fire on Saturday night. The premises were closed down at midday and the fire had apparently been smouldering for some time before it was noticed – about 0730 pm – by a railway signalman in the cabin at Grange, a short distance away. He notified a colleague at Dundee West and in response to the latter’s summons Dundee Fire Brigade made a quick turnout under Deputy Firemaster Mackay. Several tons of coal on a platform above the drying kilns were alight and the building was full of smoke. While the brigade was on its 12-mile journey passers-by gained entry to the works but could do nothing on account of the lack of appliances and water. More than 1000 feet of hose were laid out to the Pow Burn and a plentiful supply of water was obtained. The fire was quickly under control and the brigade stood by for two hours until the coal had been turned over and all danger was removed. The damage to coal and platform is estimated at £100. The works, which belong to Dundee brick and tile co ltd are situated close to the railway line midway between Inchture and Errol Stations. Constructed throughout of brick and wood, they would have been easy prey to the flames had the roof caught alight before the arrival of the brigade.

24/07/1937 – Dundee Courier –  Modern methods of production – The production of bricks at a rate of 80,000 a week. This is what the output will be of the new brickworks at the Grange, Errol where the Dundee brick and tile company limited have installed the latest plant for the manufacture of bricks. This new industry is of great importance not only to Dundee and the surrounding counties but to the building trade of Scotland, which will no longer be largely dependent upon England for supplies of first-class brick. A party of architects, surveyors and builders visited the works and were intrigued by the simplicity of production.  The tour of inspection of the works began at the claypit, where the company have opened up a deep bed of excellent clay, suitable for the manufacture of facing bricks as well as tile drain pipes and other clay products for the production of which the works are fully equipped. Here was seen, in full operation, one of the latest types of multi bucket excavators, which is capable of digging clay to produce 25,000 bricks per week. This type of excavator has the advantage of ensuring an even and regular mixture of clay. Light rail bogey transport provides the means of conveying the clay to the mill head, where it is delivered by gravity chute into two brick making machines of the latest type, the production capacity of which is 2400 bricks per hour. On completion of the drying process, the bricks are conveyed to a modern type of kiln, where a complete set of pneumatic stokers is in operation, giving a regular and economic feed of small coal to the continuous fire. The bricks seen coming from the kiln were evenly burned, well-shaped and of pleasing colour. For a freezing test, the bricks were immersed in water for 24 hours and then frozen and thawed alternatively 10 times, 24 hours freezing and 24 hours thawed in water 60 – 69 F each period. The bricks showed no cracking, spalling, lamination or other visible defects during or after the completion of the test. It was proved that the bricks stood an average crushing load of 4720 lb per square inch or 303 tons per square foot.

15/07/1938 – Dundee Courier – Brickworks strike ends today – Men to restart work today  – Work is being resumed today at the works of Dundee Brick and Tile Co Ltd, Waterybutts, Errol where about 30 men went out on strike on Tuesday as the result, it is understood, of the dismissal of one of their number. Representatives of the men met employers yesterday with a view to negotiations. It was stated by an official of the firm afterwards that the men would go back to work today.

28/11/1939 – Dundee Evening Telegraph – Dundee Brick and Tile Company Limited – Notice is hereby given pursuant to Section 238 of the Companies Act 1929, that a meeting of the creditors of the above-named Company will be held within our office, 11 Panmure Street, Dundee on Wednesday 6th day of December 1939 at 1130 o’clock forenoon for the purpose specified in sections 238 and 240 of said act. Dated 25/11/1939. Signed Henderson and Loggie, Secretaries.

14/08/1941 – Dundee Courier – Dundee Brick and Tile Company Limited (In liquidation). The undertaking carried on by the above company at Waterybutts, Errol, Perthshire together with the whole heritable property, machinery, plant and equipment is offered for sale as going concern. The brickwork is of a modern construction and the plant up to date and there is a large reserve of suitable clay on the ground leased by the company. Further information can be obtained from the subscriber who will arrange for intending offerers being shown over the premises …