(Note – SBH – I am not certain as to which exact location William Miller made bricks. There is a reference to him an address of Wardhead, Errol. If this is where the brickworks were situated then the works could actually be the Errol Brickworks.). 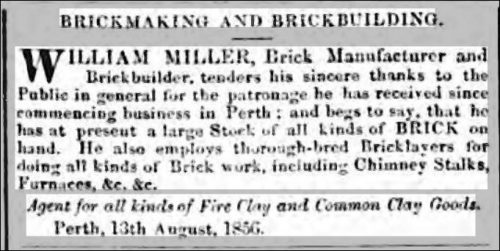 26/09/1863 – Dundee Advertiser – Peter Harraughty, labourer. South Street, Perth, was found guilty of having, on the 9th September, near to the Cottar Houses of West Inchmichael, Errol, assaulted William Miller, brickmaker, Wardhead, Errol, and was fined 10s, with the alternative of ten days’ imprisonment