Info – Opened 1883, closed 1 January 1917, re-opened 2 June 1919, closed 24 September 1927. The station here closed in 1927 but the signal box remained open. The signal box replaced an earlier one in 1914 and was closed in 1960. The station remained standing after closure. There was a brickworks siding. To the south of the station was the Broomhouse Colliery and to the north, the Daldowie Colliery.

Below – 1896 – The Broomhouse Colliery is the site of the Broomhouse Brickworks although they are not specifically detailed on the map. 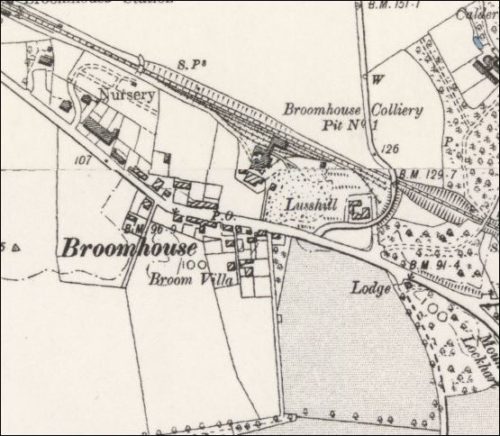 26/06/1922 – Dundee Evening Telegraph – Scottish collieries deal – As the result of an offer made by Mr John Gardner, coalmaster, Glasgow (of the Mount Vernon Colliery Company, Ltd.), to acquire the coalfields of the Glasgow Coal Company, Ltd., and the Haughhead Coal Company, Ltd., negotiations were entered into some time ago, and it is understood that an agreement has now been practically concluded for the transfer of the properties concerned. , The collieries, seven in number, are known as Mount Vernon, Daldowie, Kenmuirhill, Newton, Carmyle, Broomhouse, and Hawkhead, and the Broomhouse property includes a large modern brickwork. With the acquisition of these collieries, which adjoin others in which he has interests already, Mr Gardner will be one of the largest proprietors of coalfields in the immediate vicinity of Glasgow. 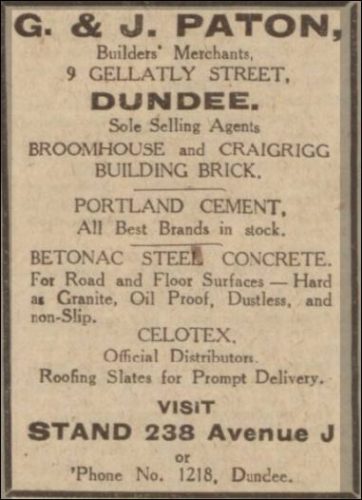 18/02/1928 – The Scotsman – The third annual housing and building exhibition in Edinburgh … Celotex is exhibited at Stand 35 by Messrs G and J Paton, 160 Hope Street, Glasgow, who are the official distributors for this material. The same firm is also showing ” Cambor ” Welsh slates, of which they control a very large output, and are in a position to supply prompt deliveries. The slates are produced in blue, purple, grey-green, and rustic colours in the usual sizes. This make of slate has been used in several large housing schemes throughout the country. Various bricks are also exhibited by the firm, including the Broomhouse and Craigrigg composition building brick, of which they are the sole suppliers. Dry rot solution, cement, facing bricks, and other materials of interest to housebuilders are also on view.

21/02/1928 – Dundee Courier – Modern house comfort – Attractive exhibition in Edinburgh – … All over Scotland in many important buildings and housing schemes the Cambor Welsh slates, which this firm can produce in large numbers and with the minimum loss time, have been supplied. They have on view also Broomhouse and Craigrigg 3 1/2 in. composition bricks, which have been used to a considerable extent by Dundee builders …

30/06/1928 – Airdrie and Coatbridge Advertiser – New Brickwork – At Barrachnie Colliery, Baillieston, owned by the Mount Vernon Coal Coy., Ltd., a new brick producing plant is in the course of erection, and it is stated will be completed in about a month’s time. On Monday the huge chimney stalk, 120 feet high, was finished and a flag placed on the top. In the building of this chimney, 1000 tons of red bricks were used and the time taken to build it was five weeks, supposed to be a record-breaking feat. Messrs William Cleghorn and Son are the contractors. All the bricks used on this job are being supplied by the Mount Vernon Coal Coy.’s Broomhouse Brickwork which is producing bricks at the rate of over 100,000 per week.

Below – 02/03/1931 – The Scotsman – The Mount Vernon Colliery Co Ltd (In liquidation) – For sale. The following pits and brickworks belonging to the Company including Cadder Brickworks, Bishopbriggs and Barrachnie Brickworks, Baillieston and Broomhouse brickworks …

28/05/1932 – Airdrie and Coatbridge Advertiser – Court case. Broomhouse Brickworks employee was charged with maliciously opening the doors of a railway carriage and allowing the cargo of blaes to spill out. Also charged with assault and breach of the peace.

04/08/1933 – Motherwell Times – Distressing works mishap – Uddingston youth loses a leg. A distressing accident occurred at Broomhouse Brickworks when a youth Thomas Ross, of Uddingston, stumbled and became entangled in the machinery. When extricated the lad was found to suffering from a compound fracture to one of his legs. After being attended to by Dr Gibson, he was removed to Glasgow Royal Infirmary, where it was found necessary to amputate the limb.

03/04/1935 – Dundee Evening Telegraph – … James Ness, a Dundee representative of L.N.E.R said that the railway company had conveyed bricks from Broomhouse Brickworks to Mr David Bowman, builder, Dundee for a number of years … 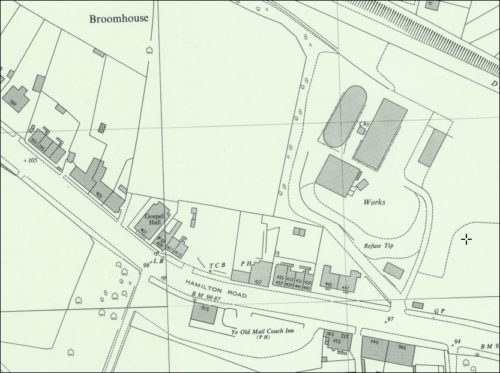 09/06/1947 – The Scotsman – Glasgow business man’s death – Mr George Stewart Paton, partner with his brother in the firm of Messers G & J Paton, engineers and merchants, Wellington Street, Glasgow and chairman of the Broomhouse Brick Company Ltd, died on Saturday at his home in Douglas Gardens, Uddingston. He was 60 years of age. A native of Uddingston, Mr Paton was widely known in the Scottish building trade. He was a past deacon of the incorporation of masons and a past president of the Scottish Cement Merchants Association. Mr Paton was a well known member of the Glasgow Conservative Club. Before WW1 he spent some time in the Argentine as a Civil Engineer.

1965 – The 1985 publication ‘A survey of Scottish brickmarks’ suggests that George and James Paton (Broomhouse) were the owners.