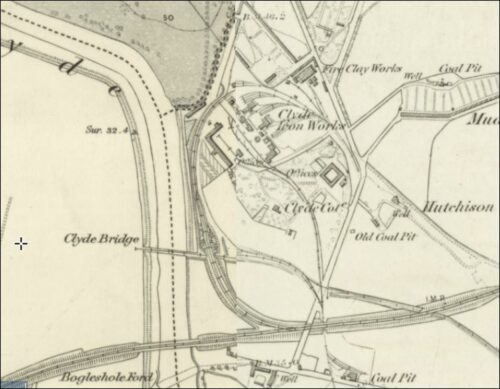 27/01/1873 – Glasgow Herald – Wanted, a party to contract for malting, kilning and burning all the various classes of fire brick manufactured at the Clyde Iron Works. The contractor must be a thoroughly practical and experienced man, ready to devote his whole time and attention to the work and must not be otherwise engaged. For further particulars, apply to Mr Niven at the works.

29/07/1905 – Coatbridge Leader – Bricklayers fatal fall. The next, inquiry was with reference to the death of Win. Graham, bricklayer, Waverley Terrace, Coat midge, who died on the 11th July, in the Royal Infirmary, Glasgow, from injuries sustained, in the Clyde Iron Works, Carmyle, belonging to Jas. Dunlop & Coy. John Culbert, bricklayer, residing at 18 Fairy Street, Rutherglen, deponed -I am in the employment of the Calder Fireclay Company, and they were engaged building a new stove at the Clyde Iron Works. Deceased and I were engaged building the interior of the blast stove, and had reached a part 50 ft. high. The stove was 22 ft. in circumference. Deceased was standing on a scaffold supported by three iron needles, and I was standing on a single scaffold at the other side. Bricks were conveyed to the top by means of a steam winch, and a springboard passed between the two scaffolds. The springboard was three feet broad, and there was a space of six feet through which the bricks could pass. There were labourers at the top of the stove to watch when the bricks being hoisted came near the scaffold and guide them past. I cannot say if these were their orders, but they did not watch every time the bricks passed. I had to watch myself for my own safety. About 3.45 on the 11th July we were engaged at our work when a load of bricks came up. I went on with my work, and the first thing I heard was a noise. On looking round I saw the deceased falling, the scaffold having been capsized and one of the needles knocked out. The springboard had struck the scaffold and knocked out one of the needles. The deceased was taken to the Royal Infirmary, where he died. George King, foreman bricklayer, Carncraig, Calder, stated that he was in charge of the job at Clyde Iron Work. The duty of the labourers was to guide the bricks past the scaffold. It was difficult to do that at times, as a swing got on to the rope. They were following the usual course in conducting a business of the kind, and iron needles were put in to make the scaffold more secure. The jury returned a verdict to the effect that, about 3.45 p.m. on the 11th July, Wm Graham, while employed as a bricklayer by Calder Fireclay Company and engaged in building a blast stove on the premises of the Clyde Iron Works, Carmyle, received injuries by the scaffold on which he was standing being overturned by a springboard striking it, causing him to fall about 50 feet, and from the injuries he received he died at. 7.15 the same evening. 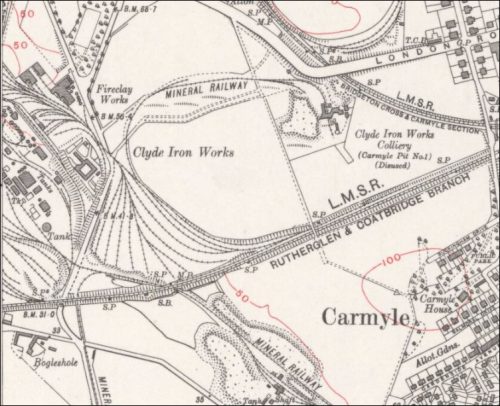 03/09/1954 – Motherwell Times – Firms display products at Scottish Industries Exhibition in Glasgow … Colvilles Ltd – The main feature of the stand Messrs Colvilles Ltd., is a model of the proposed development at Ravenscraig. Measuring eleven feet by eight feet, the model itself has been developed since it was shown to pressmen at Dalzell Steelworks recently because it now shows the final development and not the initial stages of the £2om project as originally shown. Round the base of the stand are some slag facing bricks manufactured by the firm at Clyde Iron Works  …

July 1961 – Clay Worker Magazine? – Colvilles  –  The brickworks works is situated at the company’s Clyde ironworks, near Glasgow and the material used for their bricks is blast furnace slag.  The first bricks they made consisted of 97 per cent slag and 2 1/2 per cent hydrated lime.  These were put into an autoclave and steamed for five or six hours but, apparently in the process, the colour was leached out and only grey bricks came out of the oven.  As saturation point was soon reached in the popularity for grey in Scotland that company had to turn to colouring their bricks.  To do this they reduced the slag content to 87 per cent and added 10 per cent cement bonding and 2 per cent colouring material, consisting of synthetic iron oxide and carbon black.  Water makes up the round of 100 per cent.  The autoclave was scrapped and the bricks are now hardened in the atmosphere for a minimum period of six weeks.  As a result, the company have a more saleable brick but they have lost something in quality.  The drying shrinkage, for instance, is 0.28 per cent and only just manages to meet the specifications whilst one would guess there might be sulphate trouble in time.  In addition, the greys are cheaper at £9 per 1,000.

Manufacturing Process – The slag is first put into pits and allowed to cool. From here it is loaded into a hopper and fed by skip hoist (about 160 tons a day) to storage bins in the making shop.  Other bins cement and colouring which with the slag (ground and turned to dust) are drawn from their respective hoppers and batch weighed.  Water is added and the material is mixed in an August Simpson mixer, which used to have rolls but now has a series of paddles. A rotary feeder conveys the mixture to the Hercules presses where a pressure of 120 tons is exerted.  There are three presses, each has twelve moulds and can produce 1800 bricks per hour and from here the bricks are carried by forklift truck to the curing shed. The colour range of the bricks is now red, brown, yellow and sun buff as well as grey … (Note – SBH – There is more but the print is too faint to read).