14/12/1934 – Carluke and Lanark Gazette – Suggestion put forward to manufacture bricks at Mayfield, Carluke and utilising the unused tors there. 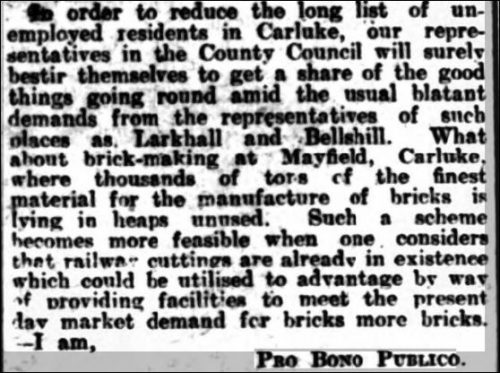 21/12/1945 – Carluke and Lanark Gazette – New brickwork for Carluke – There is a likelihood of a new brickwork being started in Carluke. The Coltness Iron Co., Ltd., is contemplating starting a new work at Mayfield at an early date and it is expected that when in full production it will give employment to over 40 people. Preliminary work is in progress in anticipation of the “go ahead ” order.

1947 – c. 1965 – The 1985 publication ‘A survey of Scottish brickmarks’ suggests that the Coltness Iron Company operated the brickworks between these dates.

05/08/1949 – Motherwell Times –  Motherwell, Wishaw and Bellshill firms on parade at Exhibition … Among the largest of the county exhibitors is the Coltness Iron Company Ltd., Newmains, which will display steel and iron castings, bricks and cement … The firm’s display will let the public and manufacturers see the various castings done at Newmains, the bricks produced at Mayfield and Stepps Brickworks (Stepends?), and cement from the Newmains works.

22/05/1964 – Wishaw Press – Change of title for Coltness Iron Company. New company to boost brick production.  Bold new plans for the future are announced this week By the Coltness Iron Company Ltd. The plans, aimed at putting the company in the forefront of Scottish industry, include a change of title, the formation of a new company to handle sales, the switch of headquarters from Newmains to Glasgow and a 75 per cent increase in brick production at the Morningside, Airdrie and Carluke brickworks.  The ” meet the future ” plans were announced at a Press Conference, which followed an extraordinary general meeting of the company, held in the Central Hotel, Glasgow, last Friday. Company chairman, Lt. Col. J. F. H. Houldsworth, announced the change of name. After 127 years the old title Coltness Iron Company Limited goes out. The new company title is COLTNESS INDUSTRIES LIMITED. A new company, Coltness (Sales) Ltd. has been set up to handle all the sales of Coltness Industries and group headquarters are to be moved from Main Street. Newmains, to a new building which is almost complete, Clive House, India Street, Glasgow. Brick production at Chapel Brickworks, Morningside, Mayfield Brickworks, Carluke and Stepends Brickwork Airdrie is to be stepped up by 75% which should result in the production of over one million bricks a week. The step-up in production has meant an investment of £150,000 by the company in new machinery. The plans will mean an additional 30 jobs at the Chapel Brickworks, Morningside, where a new kiln is being built and where production is expected to bump from 130,000 to 420,000 bricks a week in August. Referring to the change of name of the company Col. Houldsworth said: ” This is a natural step to take, especially as the company is no longer identified with iron and steel foundries or, indeed, coal mining although we are still proud to be of service to the N.C.B. through our subsidiary company, Beckett & Anderson who manufacture mining equipment.” Col. Houldsworth continued “We are now a well-diversified Scottish industrial company with widespread interests on Clydeside, in Stirlingshire and Lanarkshire manufacturing bricks, nails, central heating, mining haulage and marine winch equipment. Our total assets are over £1 million. We employ 400 people and we hope before long that through growth, development and diversification, we shall employ many more. I believe all the changes underline our belief in the future and our intention to think far ahead and plan accordingly”. Concluding, Col Houldsworth said,” I hope that what I have said indicates that Coltness Industries Limited are today 127 years young. We intend to keep it that way and we intend to play our part in the life and prosperity of Scotland. Coltness Iron Works were founded at Newmains, in 1837. In 1899 Coltness Iron Company became a public company. By that date, in addition to nine blast furnaces and iron and steel foundries, the Company owned 20 coal mines and pits in the counties of Lanark, West Lothian, Fife and Midlothian.
By 1930 the Company’s coal mining interests had spread to West Cumberland and Warwickshire. Following the nationalisation of the mines on 1st January 1947, the Company was left with its iron and steel foundries, brickworks and blast furnaces and cement works. Since then the management has sought expansion by diversification in various directions through the parent company and its subsidiaries. In 1947 Mayfield brickworks were built at Carluke and the following year Beckett & Anderson became a wholly-owned subsidiary. In 1950 Newmains Brickwork company was purchased and during 1952 the iron and steel foundries were sold. Eight years ago J. & W. Somerville became a wholly-owned subsidiary. In 1963 the blast furnace, cement works closed.

c. 1965 – 1978 – The 1985 publication ‘A survey of Scottish brickmarks’ suggests that the Caledonian Brick Company operated the brickworks between these dates.