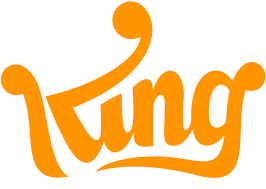 1880 – There is also a good freestone quarry on Bellside Estate, wrought by Mr King of Motherwell, where he also conducts the making of composition bricks …

02/02/1885 – Glasgow Herald – Hamilton – Damages for injury in quarry – In Hamilton Sheriff Court, John Linton, Quarryman, Bellside, sued Thomas King & Co, quarrymasters, Bellside Quarries for damages under the Employers Liability Act, for injuries received by a fall from the bare in their quarry at the beginning of last year, though it was alleged, the faulty construction of the bare or slope, and it’s having been insufficiently watched. Sheriff Birnie has found the pursuer was injured through the fault of the defenders and has awarded £20 damages with the expenses of the action. W.Brown & Co for the pursuer and Mr Moncrieff, Glasgow for the defenders.

Below – 20/08/1892 – Linlithgowshire Gazette – Wilful explosion by ex-employees of Bellade and Auchinleck? (Bellside and Auchinlea ) … Cottages belonging to Messrs Taylor and King were blown up.

Below – 1896 – Adverts for Thomas King & Co, Bellside & Greenhill by Motherwell. 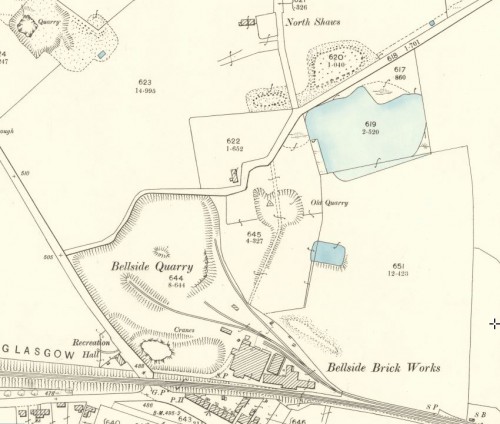 21/05/1897 – Motherwell Times – Major Scott of Motherwell takes over the Auchinlea Estates. A few weeks ago it was publicly announced that the lands of Auchinlea and North Shaws, belonging to Colonel Buchanan, Drumpellier, had been purchased by Major Scott, Motherwell. The lands are rich in mineral, containing the famed Auchinlea freestone, partly leased by Messrs Taylor & King, and Messrs T. Gibb & Sons. Coal is also being worked Messrs Greenhill Colliery Company, Limited. The purchase by Major Scott has given the most lively satisfaction. He is the sole partner of the firm of Thomas King & Co., Bellside Quarries and Brickworks and Greenhill Quarries, and the largest employer of labour in the district. Respected by the general public, and almost worshipped by his employees, the event of his formally taking possession of the estate on May was made the occasion of extraordinary rejoicings by his friends, the tenants, and particularly his workmen. From the pits and quarries on the estate flags waved from every point. The principal decorations, however, were the result of the spontaneous and combined efforts of his employees at his own quarries and brickworks, and these were of the most elaborate description. From every door and window in the Bellside Buildings evergreens and bannerettes were hung; large poles bearing Union Jacks were set in all prominent places around the works; the cranes, workshops, and kilns were draped with evergreens and coloured cloth; the trees between the two works (a distance of one mile) were for the time made use of as standard-bearers, and from their tops, large flags waved; tall poles on blaize heaps bearing Union Jacks showed them to advantage for miles around. These, with triumphal arches of evergreens erected at various places welcoming the new laird, completed the most effective, picturesque, and extensive decorations ever witnessed in the district and were viewed by large numbers of sightseers from distances. To celebrate the event, Major Scott had on Saturday arranged to give his workers a free trip. Between four and five hundred availed themselves of his generosity, and leaving Omoa per special train, they picked up Major Scott and a few friends at Holytown and were soon in Gourock, where the Ivanhoe was waiting, being specially chartered to convey the excursionists around the Isle of Bute, and land them at Rothesay. Calling at Craigmore, where Mrs Scott and family were taken on board and greeted with hearty cheers, the fast steamer made its way all too quickly in the most delightful of weather and the smoothest of water through the Kyles, past the Maids and round the Island, arriving at Rothesay shortly after twelve o’clock. From this till 6.30, when the return journey was begun, the holiday seekers were at liberty to enjoy themselves as best they may, and from reports, all seem to have fully enjoyed themselves, the utmost good humour prevailing throughout the whole party. At Gourock, on the return journey, they gathered around the saloon carriage, and gave the gallant Major three roof-lifting cheers, singing “For he’s a jolly good fellow.’ Arrival at Omoa at about 9, brought to end one of the most pleasant days that could be desired, inaugurating the “taking possession of ” by the most popular laird in the district, and evidently the advent of warm weather. The excursion was accompanied by the time-famed brass band, which did much by their lively rendering of selections and dance music (which was fully taken advantage by the dancers onboard) to enliven the time. Since their last public appearance, this band has increased numerically, and improved much in playing, the selections rendered on Rothesay Pier showing that there is, still the old competing stuff in them yet.

13/05/1898 – Motherwell Times – Trip to Aberdeen – The annual excursion of the employees of Thomas King & Co, Greenhill and Bellside Quarries and Brickworks took place to Aberdeen on Saturday last, upwards of 400 being present. Major Scott and family and a number of invited guests travelled by saloon carriage. On arrival at Aberdeen, the company departed to see the sights of the town. Major Scott afterwards entertained the invited guests to dinner and tea in the Anthenaeum Hotel. After tea Bailie King rose and delivered an interesting speech describing the beautiful scenery through which they had passed and making suitable reference to the City of Aberdeen. He was sure the appearance of the town had more than fully come up to their expectations. On behalf of the company, he thanked Major Scott for giving them the chance of being present and also for the way he had entertained them there that day. At the request of Bailie King, 3 hearty cheers were given to Major and Mrs Scott and family. Major Scott in reply, thanked Bailie King for his kind remarks and the company for their cheers. He was glad they had all enjoyed themselves. The company arrived home safe, all wishing that the genial Laird of Auchinlea would be long spared to organise many more happy outings.

28/06/1899 – Falkirk Herald – Action against a Falkirk builder. In the Falkirk Sheriff Court on Friday, proof was led in an action in which Messrs Thomas King and Co, brick manufacturers, Motherwell sued John Gardner, builder, Falkirk for £16 7s 9d being the amount of an account for bricks supplied by the firm to Mr Gardner’s order for the erection of a new brewery for Messrs Jas Aitken and Co. The defence was that two consignments of bricks were not conform to order, the understanding and agreement between the parties being that first quality bricks should be supplied whereas the bricks actually sent to the defender were of inferior quality and were rejected by the architect and master of works. Mr Gardner pleaded that he did refuse and was entitled to refuse, to take delivery of the bricks. The pursuers alleged that the goods were conform to the order, Mr Gardner not having, in this particular order, expressly stated that the bricks were to be of first quality. They further stated that Mr Gardner had not timeously rejected the bricks but in the witness box Mr Gardner said that he had repeatedly informed  the pursuers traveller that he could not take delivery of them. After hearing the parties the sheriff took the case to avizandum …

Below – 1907 – Advert for Thomas King, Auchinlea and Bellside. (No longer Greenhill). 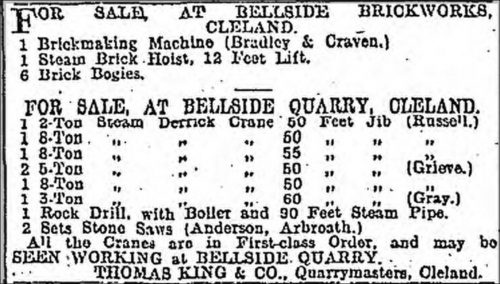 01/11/1912 – Motherwell Times – Bailie McKendrick gives a statement on the contracts to build the new poorhouse. ” … Bailie McKendrick said he held in his hand an excerpt of the minute of the Dalziel Parish Council showing they agreed to get the best brick in the market, namely Thomas King & Coy’s, Bellside for the facing bricks and Bothwell Park wire cut brick for the inside brick.  That was settled by the Parish Council and no other bricks were introduced into the building. He thought he opponent must have had a dream and he could unravel the dream for him, because in connection with the new burgh stables when they were being built, the Burgh engineer stipulated for the best-pressed brick outside and the No 1 quality white enamel brick for the inside.  This was going to make a very expensive building and when the offers were received, he (Bailie McKendrick ) was one of those who protested against the amount of money being spent and a small committee of 3 was appointed to try and reduce the price. He (Bailie McKendrick ) was 1 of the 3  and instead of the pressed brick they get wire cut clay brick and No 2 quality white enamel brick for inside …

Ian King of Coatbridge informs me that when King moved from Bellside he opened a brickworks at Alderside and ran that in conjunction with the Auchinlea, Bellside Brickworks. These were then in turn both taken over by the English company, the Butterley Brick Company in or about the 1970s.