29/11/1844 – Glasgow Herald – Tile and fire brick works to let. To be let for such a number of years as can be agreed on. The Tilework on Wishaw Estate in the Parish of Cambusnethen. The clay is abundant, and of excellent quality, the work is well fitted up, in good repair, and particularly well situated, being within fifty yards of the colliery, the branch road from which to the Wishaw and Coltness Railway passes through the premises. Also, another work, to be fitted up for making fire bricks, equally well-situated, which will either be let separately or along with the above work, as offerers may incline. For further particulars, an application may be made to Messrs. Montgomerie & Fleming, writers in Glasgow; or to James Miller at Wishaw. Wishaw, 26th November 1844.

24/12/1849 – Glasgow Herald – Draining tiles and pipes &c. The subscriber is the agent for the sale of drainage tiles and pipes of various shapes and sizes, all 14″ in length. Also common, composition and fireclay bricks &c. Manufactured of the best material at Wishaw Tile and Brickwork on the side of the Caledonian Railway from whence they can be conveyed at a moderate price in every direction. The Clydesdale Junction Railway, leading to the new harbour at Broomielaw affords every facility for shipment direct from the trucks without the expense of cartage. Glazed vitrified pipes, strong and beautifully made with spiggot and faucet joints for conveying water or liquid manure of farm steadings, of 2, 3, 4, 5 and 6 inches in bore and in 2 and 3 feet lengths are also sold by the subscriber and samples of the whole may be seen and prices ascertained at his office in Glasgow. James D. Ferguson, land agent and accountant. 72 St George’s Place, Glasgow. 22/12/1849.

05/12/1850 – North British Agriculturist – Statistics of Scottish gardening. Wishaw House … This estate possesses immense subterranean riches. Coal, iron, stone, blackband ironstone, fire clay of very superior quality, abound to an almost unknown extent and are worked to great profit. The pit near Wishaw Distillery is twenty-two fathoms deep, and three seams of coal are wrought in it, the first being seven feet thick, the second of greater thickness; but from the nature of strata of fire clay over it, only five feet of coal are quarried. The third or main coal is found in one seam nine feet in depth. Brick earth is in abundance, and of first-rate quality. An extensive brick and drain-tile establishment has been formed here within these few years and is let on lease to a spirited English manufacturer (Mr Dean), who is turning out an enormous quantity of manufactured goods annually, and we believe of quality not excelled by any other work in the kingdom …

Below – 12/09/1850 – North British Agriculturist – Thomas Dean, Wishaw and Robert Thorburn, Broxburn – new drain pipe and tile cutting apparatus … the object being the accurate formation of the junctions of drain tiles with overlaps so that each tile when laid down will have a bearing on its neighbour and be prevented from getting out of the continuous line formed by the series … 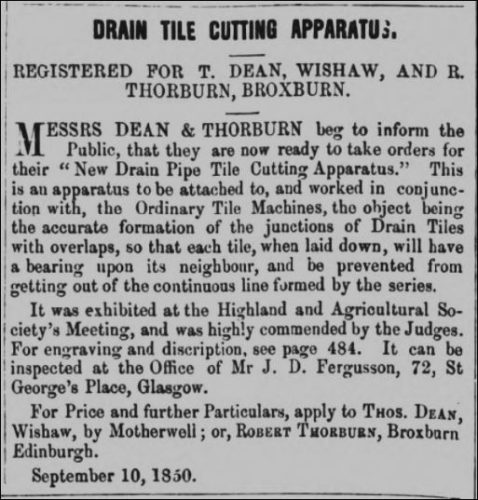 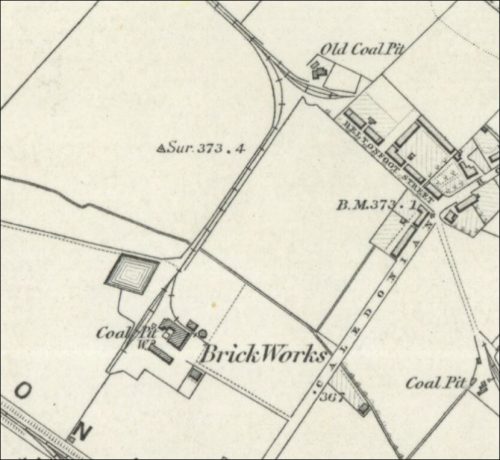 1858 – 1861 – ScotlandsPlaces – An extensive brick and tile work of all description the business of which is conducted by Mr Thomas Dean. Lord Belhaven Proprietor

24/09/1861 – Edinburgh Gazette – Sequestration of James Steel, Builder in Cambuanethan, near Wishaw. William Thomson, Accountant, Wishaw, has been elected Trustee on the estate; and Thomas Dean, brick manufacturer, Wishaw, Gavin Pettigrew, Allanton Brick and Tile Works, near Wishaw, and James B. Honeyman, Blacksmith, Wishaw, have been elected commissioners. The examination of the bankrupt will take place within the Sheriff Courthouse at Hamilton, upon Tuesday the 1st day of October, at 12 o’clock noon. The Creditors will meet in the Office of William Brown, Writer, Beckford Street, Hamilton, on Thursday the 10th day of October 1861, at two o’clock afternoon.

16/07/1864 – Hamilton Advertiser – A 10 horse engine and pan mill for sale, in good working order. Application to be made to Mr Thomas Dean, Wishaw Brickworks, where it can be seen and going if desired.

22/10/1864 – Hamilton Advertiser – The Wishaw Brick and Tile Works to let -To be let, for such a term of years as may be agreed upon, the brick, drain, tile and pottery works, on the Wishaw Estate, as now in possession of the representatives of the late Mr Thos. Dean.  These works are in excellent order.  The clays are abundant and well-known to be of the very best quality.  The works themselves are conveniently situated, within easy access of railway accommodation, and in the midst of the Wishaw Coalfield; and are well supplied with the requisite means for carrying on a large and profitable trade.  For further particulars apply to James Miller, Factor, at Wishaw; or to Messrs Lindsay, Jamieson, & Haldane, 24 St Andrews’s Square, Edinburgh. Wishaw, 22nd Sept 1864.