With special thanks to Ed Fowler, Doric Columns for the permission to refer to his notations.

Seaton Brick and Tile Works – The site of this brick and tile works lies in an area now occupied by modern multi-storey housing.

The oldest established and most important brickwork in the district in the early twentieth century was the Seaton Brick and Tile Company, which was based at Strabathie, near the Black Dog. The Company appears to have been inaugurated in August 1898, about 3 1/2 miles from the New Bridge of Don on the Ellon turnpike. Aberdeen city’s brickworks had already developed in the 18th century when brick-making was based at Clayhills, north of the Dee River, and at Seaton in Old Aberdeen. There was a brickworks run by Mr Alexander Smith in 1773, but it is not on Milne’s 1789 map, indicating that it was a short-lived business. The Seaton works, which were run by Alexander Annand & Company, do figure on Taylor’s map from 1773, and there was apparently a second little-known brickworks in Seaton too.

The Seaton Company was evidently a large one as they had 2 brickworks at Torry – Plaidy and Esslemont – and one at Dryleys, Montrose.

The company expanded first to Torry in 1883 but moved to Strabathie when the clay at Torry was exhausted.  At that point, other establishments were given up to concentrate on Strabathie. In 1903 Mr Alexander Smith managed the company, with the support of foreman Mr John Grant. Circa 100 people were employed at Strabathie, which could turn out 5 million bricks, 1,750,000 drainpipes and various other items annually. The company constructed a special light railway about 3-1/2 miles long to take bricks from Strabathie to their depot at the Bridge of Don, using some adapted old horse tramway cars. The company lasted a good 20 years until the clay gave out.

When the Seaton Brick and Tile Company went into liquidation in 1924, Murcar Golf Club bought out the railway and ran it as a very successful transport venture to the club until 1949. By this time the motorcar was becoming more prevalent and public transport.

The lower part of Powis Burn is called the Tile Burn, near Seaton Brick and Tile Works it was crossed by the Tile Ford, which was on the road from the Brickwork to the Sand Hills at the sea-side, where the sand required in brick-making was procured. A wooden bridge has now taken the place of the ford.

The red laminated clay at Seaton Brickwork is derived from the old red sandstone beds that once existed, on a larger scale than they do now, between the Dee and the Don on the site of the city. In the glacial epoch, the snow sheet entering the sea between the rivers abraded and carried off the soft red rocks. As it entered the sea it melted, and its burden of debris was taken in hand by the waves. Big boulders and large stones had been left where they fell out of the melting Ice; small stones had been rolled backwards and forwards at the edge of the sea till worn to pebbles and sand; the sand from the rough clay licked up by the ice had been well washed and deposited in layers on a sloping beach; and the washings, fine pure clay, had been carried out into deep water, where it sank when the tide was at rest at high and low water. When the tide was running fast, flowing or ebbing, the light clay did not get time to fall,  but only a little heavy sand. Eight layers had been laid down every day, 4 of clay when the tide was standing still alternating with 4 of sand when it was running north or south. When a spadeful of this clay is dug out of a bed and dries in the sun it splits up at the sandy layers into thin leaves or laminate … Since its deposition, the land had risen far enough to raise the clay beds above the sea, though in some clay pits the laminated clay goes down below sea level. 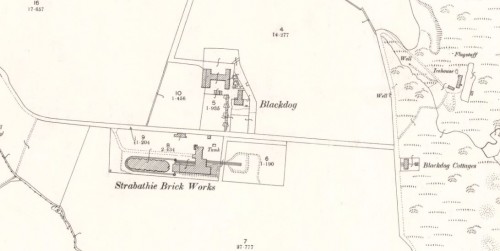 18/01/1899 – Aberdeen Press and Journal – In Aberdeen Sheriff Court on Friday, Sheriff Robertson on the bench, the record was closed in an action at the instance of the Seaton Brick and Tile Company, Limited, against Robert Mitchell, builder, 3 Elmfield Place, Aberdeen, concluding for £226 sterling, being loss sustained by the pursuers in consequence of the alleged failure of the defender to implement a contract. From the consequence, it appeared that the defender, on 12th October 1898, offered to execute the carpentry work of the brickworks at Blackdog, according to plans and specifications and general conditions prepared by Mr R. G. Wilson, architect, for the sum of £859. The offer was accepted, but the defender afterwards intimated that he refused to implement his contract, and the pursuers were obliged to enter into an arrangement with another contractor. They, accordingly, accepted the next lowest offer, by Mr Alexander Winchester, house carpenter, North Esplanade West, Aberdeen, amounting to £1085, the loss and damage thus incurred by the pursuers being £226 sterling. The defender avers that there is relevant ease. The offer was founded on the pursuers having been merely an estimate on the basis of the schedule of quantities, and there having been innocently and erroneously omitted from the estimates two items amounting together to £326 and the said error being essential, the defender was not bound by his offer. The defender also states that having fully explained matters to the pursuers prior to the raising of the action, he should be assoilzied, with expenses. For pursuers – Mr Charles Ruxton, advocate; for defenders – Mr R. C. Jackson.

27/01/1900 – Aberdeen Peoples Journal – The Strathbathie light railway. Representatives of the Tramways Committee of the Town Council and the Aberdeen District Committee have been conferring on the question of the width and suitability generally of the Bridge of Don for the connection being made between the tramway and the proposed light railway to Strabathie Brickworks and arrangements are progressing favourably. The Seaton Brick and Tile Company have purchased three the old Woodside cars for £15 each and fourth for £20. Aberdeen District Committee at a meeting on Tuesday informally considered the matter and resolved to refer it to the County Road Board without any recommendation. The District Committee, however, decided not to oppose the scheme. 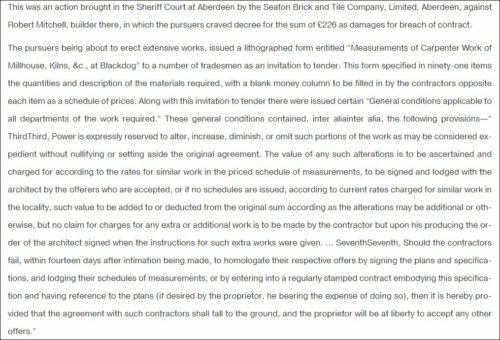 Below – 08/08/1905 – Aberdeen Press and Journal – Outing by the Aberdeen Mechanical Society to Strabathie Brickworks. 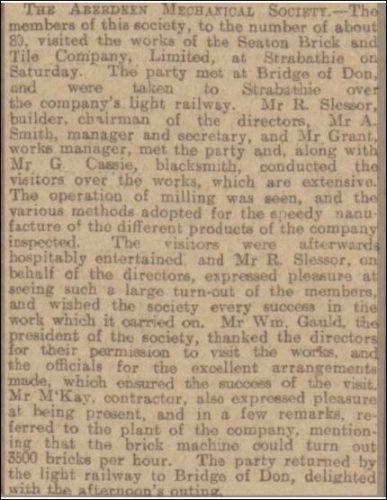 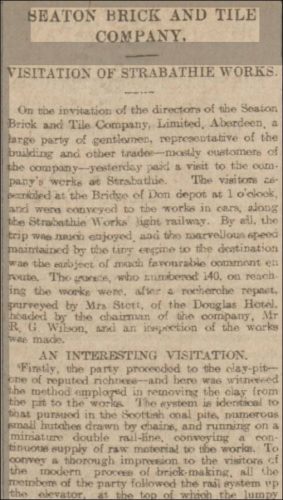 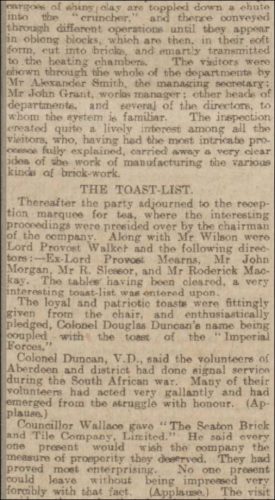 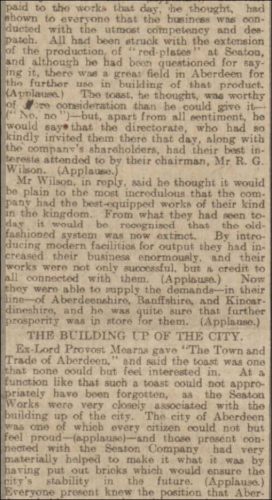 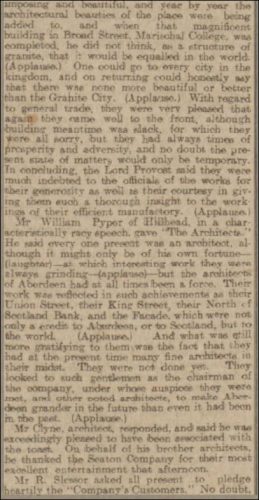 Below – c. 1910 – Strathbathie Brickworks. Many thanks to Alistair Robertson for forwarding the photo.  Alistair says – On the right can be seen the locomotive and one of the wagons that was used to carry the workers from the Bridge of Don to the works.  The railway was also used by the Murcar Golf Club for transporting golfers and when Seaton Brick and Tile went into liquidation in 1927 the golf club took over the railway and ran it up until 1949. It was the only golf club in the world to have it’s own railway. The brick chimney had to be blown up by the army about 15 years later as it was so well built they couldn’t get a contractor to demolish it! 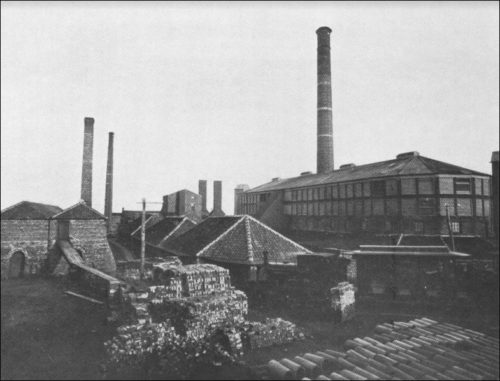