18/02/1826 – Patrick Warner of Ardeer Estate was responsible for exporting tiles and sole plates and importing Welsh slate. Unknown source and no confirmation it relates to the Ardeer brickworks directly.

1855 – 1857 – ScotlandsPlaces – Ardeer Brickworks. This brickworks is the property of Patrick Warner Esqr.

05/03/1855 – Glasgow Herald – Ardeer Brickwork will also be let for such a number of years as may be agreed upon, from and after Whitsunday next. The clay is very superior. The kilns and drying sheds are in good order, having been lately repaired. The trustees do not bind themselves to accept the highest or any offers. Offers to be directed as above stated. Ardrossan 01/03/1855 – (The brickworks were up for let at the same time as the Ardeer Freestone Quarry where John Wilson was a foreman and Francis Russell, Arran Place, Ardrossan appears to have had some involvement ( Owner possibly and could he be of the same Russell family as involved at the Longbar Brickworks )

12/05/1855 – Ardrossan & Saltcoats Herald – Ardeer Chemical Works. We understand, within the last week or two, most of the machinery used in these works has been completed and set to work. A part of their material is used in the form of bricks, and for this purpose, an expensive piece of machinery has been erected, which we lately saw at work, and which is capable of making 50 of these bricks per minute: or 36,000 in 12 hours. At this rate we estimate it would make in one clay as many building bricks as is made in the whole of Ayrshire in a week. 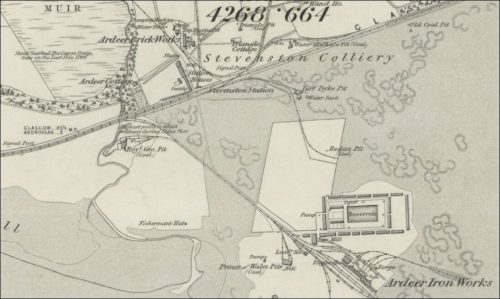 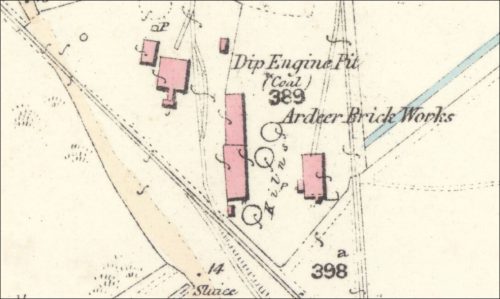 Below – 14/03/1868 – Glasgow Herald -Douglas &c V Dickie &c. In this action, John Douglas, brick manufacturer and James Boyd, Quarryman, both members of the Parochial Board of Stevenston were pursuers and John Dickie, Inspector of the poor and James Campbell, collector of the assessment for the poor of the Parish of Stevenston were defenders On the 2d November 1866, the Parochial Board came to a resolution to the effect that all tenants under £4 of rental should be relieved from the payment of the assessment for the relief of the poor for the year from 5th August 1866 to 5th August 1867. The pursuers now sought to reduce this resolution of the Parochial Board, as illegal and contrary to the provisions of the Poor-law Act. The 4th section of that Act provides that one-half of the assessment shall be imposed upon the owners and one-half upon the tenant or occupier of all lands and heritages within the parish, rateable according to the annual value of such lands or heritages; and by the 42d section the Parochial Board are empowered to exempt from payment of the assessment, or any part thereof, to such extent as may seem proper and reasonable, “any person or class of persons on the ground of inability to pay.” The pursuers maintained that this section did not authorise the Parochial Board to confer exemptions ‘de plane’ on all persons whose rents did not amount to £4 per annum; that the persons exempted were quite able to pay; and that the word “class” in the Act did not mean position as to rental of all persons indiscriminately. The Lord Ordinary (Jerviswoode) found as a matter of fact that a considerable number of persons severally occupy as tenants heritable subjects within the Parish of Stevenson, the yearly rent of which is under £4, and who are not, as respects their pecuniary circumstances, in a condition of inability to pay such assessments for the relief of the poor as may be imposed, and as matter of law, that the resolution of the Parochial Board was illegal, and ‘ultra vires’ of the board in the respect that the amount of rent was not a test of their inability to pay according to the 42d section of the Act, and that the tenants do not as such constitute a class of persons which it is within the power of the board to exempt on the ground of inability to pay. His Lordship explains in a note that the question is one of much importance not only as regards the ratepayers of the Parish of Stevenson but as respects its bearing on the general administration of the Poor-law in Scotland. At first sight, the 42d section appears merely intended to confer on the Board authority to exempt those individuals or classes of individuals whose personal condition in life was such as to justify the conclusion that they were unable to pay the assessment, but no power was conferred to exempt any particular class or description of ” lands and heritages”. On the contrary, “all lands and heritages” are the comprehensive terms employed in the statute. It therefore appears to the Lord Ordinary, that the direct operation of the exemption provided under the resolution complained of was not as authorised by the statute to exempt any person or class of persons but to exempt only a class or certain description of property for which there is no warrant within the provisions of the statute … 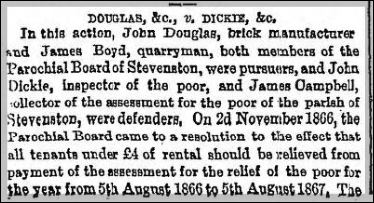 06/02/1879 – Ayr Advertiser – Brickwork at Stevenston to let – with entry at Whitsunday First. The Ardeer Brickwork with steam grinding mill, kilns and drying house etc. The work is situated in the immediate vicinity of the Stevenston Station of the Glasgow and South Western Railway from which there is a branch line and as the works have been long established there has hitherto been a good trade carried on. Mr William Douglas, the present tenant, will show the works and further particulars will be given and offers received by A.C McJannet, Factor, Irvine. Irvine 28/01/1879. 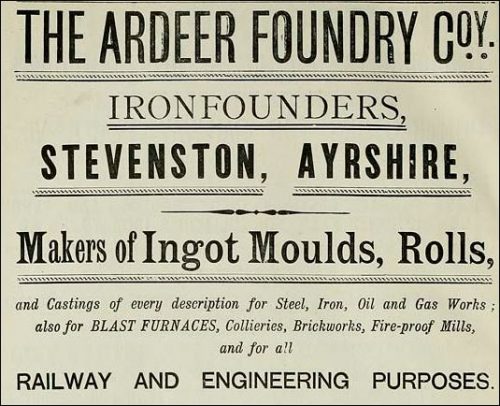 1895 – The Ardeer Brickworks are not marked on the OS Map.