28/10/1892 – Ayr Observer – On Tuesday night 3 young Irishmen, named respectively Bernard Boyle, Felix Duffy and John Darragh were found by the police lodging in a drying stove at Auchengharvie Brickworks. The lodgers were evicted and brought to Saltcoats Police Station where they passed the night. The next morning they appeared before Mr J. L. Bailey and pleading guilty to a contravention of the Trespass Act, the justice passed sentence on each of 10s or 7 days in jail. Bernard, Felix and Darragh took the 7 days.

17/08/1894 – Ardrossan and Saltcoats Herald – Bernard Reilly, tramp labourer was fined 5s or 3 days imprisonment for sleeping at the Auchenharvie Brickwork. 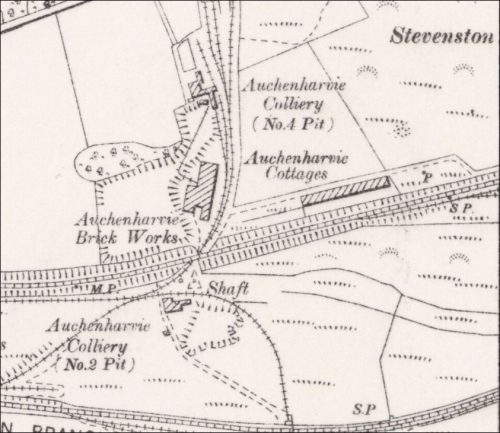 26/11/1904 – Edinburgh Evening News – Destructive Fire in Ayrshire. This morning a destructive fire occurred at the drying house of Auchenharvie Brickwork, Stevenston, the property of the Glengarnock Iron and Steel Company. The fire spread with great rapidity, and in two hours the whole structure was in ruins. The house was used for drying the articles manufactured, and a large stock of bricks, blocks, chimney cans, &c. were destroyed. A number of men are thrown idle.

Below – 1909 – Auchenharvie Brickworks, Stevenston. The brickworks are not marked on the 1938 OS Map.