Old Aberdeen brick kilns, Aberdeen – To be read in conjunction with the Seaton Brick and Tile Co).

Nothing is now visible of this brickworks, and its site lies in an area that has been landscaped as a golf course. The works are first depicted on the 1st edition of the OS 6-inch map (Aberdeenshire, 1869, sheet lxxv) and they were still roofed at the end of the 19th century (1902, sheet lxx.NE). 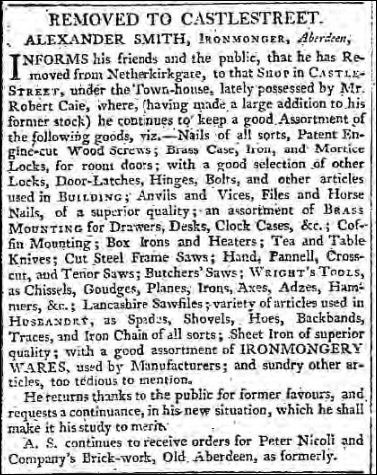 04/06/1851 – Aberdeen Press and Journal – Lands of Brickfield near Aberdeen for sale. Upon Friday the 18th day of July next, there will be exposed for sale, by public roup, at two o’clock afternoon, within the office of Alex & John Webster, Advocates, in virtue of the powers contained in a bond and disposition in security. That piece of ground called Brickfield, lying on the East side of the road leading from Aberdeen to the Bridge of Don; bounded by the road leading from the Brick kilns to Old Aberdeen on the North; by the land belonging to Mr Leslie of Powis on the South; by the Tyleburn on the East; and by the land belonging to the Merchant Society of Old Aberdeen, and others, on the West. For farther particulars, an application may be made to Messrs Webster. King Street, Aberdeen, 13th May 1851. (Note – SBH – I am uncertain if this article relates to land at the Old Brick Kilns or the Seaton Brick and Tile Works.)

Below – 1869 – Brick Kilns, Old Aberdeen (To the right of the Seaton Works so are both these Works one of the same or were they operated separately?).