Kelvinside brickworks was situated in the Maryhill district of Glasgow and operated from about 1873 to 1930 AKA Dawsholm Brickworks.

The 1985 publication ‘A survey of Scottish brickmarks’ suggests that M Yates and Co were the owners between 1873 and 1877 and that John Murray was the owner between c. 877 and 1889. This information does not sit comfortably with the details outlined below).

1873 – John Murray, contractor, quarry master, brickworks, Kelvinside and Possil Quarries, Maryhill. Ho Rockview House. (Note – SBH – This may be the same John Murray as that who operated the Kerse Brickworks, Glasgow. I have kept the tag links separate meantime until this is confirmed).

29/08/1873 – The London Gazette – Notice of dissolution – The firm of Michael Yates and Company, Coal and Quarry masters and Brickmakers, at Auchinlee, in the parish of Shotts, in Glasgow, and at Kelvinside, was of mutual consent of the subscribers, the sole partners thereof, dissolved, as on the 31st day of July 1873. The Subscribers, Thomas Gibb, John Sibbald McIntyre and John Ancell have acquired right to the whole business and assets of the Company (except the Quarry at Kelvinside and debts due to the firm in connection with it) and will continue the business of Quarry masters, Brickmakers, and Coalmasters, at Auchinlee, and at 184, Buchanan Street, Glasgow, under the firm of Gibb, McIntyre, and Ancell. The subscriber, Michael Yates, has acquired right to the Kelvinside Quarry, and to the debts due to the firm in connection with it, and he will continue that business at Kelvinside and 188, Buchanan Street, Glasgow, in his own name.
The firm of Gibb, McIntyre, and Ancell will pay the whole debts due by the late firm up to 31st July last. Glasgow, 23rd August 1873.
Michael Yates.
Thos. Gibb.
Jno. S. McIntyre
John Ancell.

05/05/1875 – Glasgow Herald – Brickworks to let. To let for such period of years as may be agreed on. That brickwork on the Kelvinside Estate adjoining the Great Western Road about 1 mile west of the Botanic Gardens. The brickwork consists of a steam engine, boiler, 2 grinding pans and drying stove, capable of drying 20,000 bricks per day. Mr Robert Allan, Manager, Balgray Cottage will point of the works. For further particulars apply to Messrs Robert Addie & Sons, Langloan Ironworks, Coatbridge.

16/03/1882 – Glasgow Evening Citizen – Bankruptcy Proceedings. Examination of Michael Yates, quarry master, Glasgow. The bankrupt deponed that bad commenced business about 20 years ago as a contractor. He was afterwards a coal and quarry master. He was sequestrated in March 1878 and discharged about six months afterwards. He commenced business again shortly after the last sequestration as a quarry-master and builder, with money got from his relations. He got about £500 altogether, £100 from a late brother, £100 from a brother-in-law, £250 from Mr Gibb, a former partner and £50 from Mr Hodge, draper. All these sums were got soon after be commenced business. He got a fresh lease of Kelvinside Quarries, of which he had been formerly the tenant and he also feued certain ground at Kelvinside, upon which he erected some villas. Mr Gibb’s and Mr Hodge’s claims had been repaid, but no portion of those of his brother and brother-in-law. So far as he could recollect, his brother Andrew, who was one of the co-obligants with him on an IOU to Mr and Mrs Baxter, was not due him any money the time the IOU was granted. On being shown letters dated 29th August 1880, and 14th October 1880, the bankrupt deponed that he found from these letters that he referred to this particular IOU as his brother Andrew’s. It was not the case that his brother Andrew was the real borrower of this money, and that he was simply a co-obligant with him. Q. —Be good enough to reconcile the fact that in the two letters you referred to this IOU is mentioned as your brother’s if he was not the real borrower?  A.— I called it my brother’s because he was an obligant as well as myself. His brother Andrew was still due him this £50. He found that this debt was not entered in his state of affairs but it was omitted through mere oversight. He lent the £50 to his brother, but he could not give the date, and there was no entry of it in his books. It was perhaps, three years ago since the money was lent. He had handed all the books in his possession to the trustee, but one or two were awanting, and he did not know where they were. The books were made up at lengthened intervals, and not as receipts came in. His Kelvinside cash book purported to commence in April 1878. It would be six months at least after that date before the first entry was made. The subsequent entries were brought up in the same fashion. The time book and the account-rendered book were written up from day to day. The books were written by his son and daughter from receipts and notes he made at the time. His connection with the Kelvinside Quarry terminated at Whitsunday, 1881, and his cash book closed that date with the balance in his favour of £669 9s 3 1/2d. He had not the money in cash at the time, as some of it was represented by the balances beyond bonds over the villas. There was an apparent balance to the good in the cash account of £715 12s. 31/2d  and the only explanation he had of the difference between those sums was that there must have been payments in connection with the villas. His drawings for household expenses were £3 per week. The item, Thomas Gibb, under liabilities in the state of affairs, £85 13s 6d, he could not tell whether it was correct or not. He did not know that item was there when he signed the statement of affairs, but he knew that Gibb was a claimant. He was first pressed for money by Messrs Stewart & Marshall, although he had felt a tightness before then. He granted a security to Mr Easdale for money received over one of his villas, but this was not suggested Mr Easdale. He sent a quantity of his quarry plant to Mr Gibb about the middle of October. At that time he was due Mr Gibb £112. He sent Mr Gibb an invoice with the plant for £162. The price of the plant was agreed upon. It was in order to realise money that he sent the plant to Mr Gibb. The bankrupt was questioned at some length to his state of affairs, which showed liabilities at £980 and assets, including value of the property, at £1938.

21/05/1890 – The Scotsman – Manager wanted at the Kelvinside Brick Company Limited, Kelvinside near Glasgow. Must have a thorough experience of brickmaking machinery. Experience of burning with Hoffman kilns will be a recommendation. Address n confidence with full particulars to the secretary of the company, 196 St Vincent Street, Glasgow.

01/07/1890 – The Scotsman – Joint-stock companies in Scotland – Kelvinside Brick Company, 82 Gordon Street, Glasgow to enter into a lease with the proprietors of the Kelvinside Estate, Glasgow of certain lands and shale or blae bings at Kelvinside and to catty on the business of brick manufacturing. Capital £10,000 in 10,000 shares of £1 each.

16/03/1891 – Glasgow Herald – Wanted, setters and burners for brickwork. Preferences given to those accustomed to working the Hoffman kiln. Apply to the secretary, Kelvinside Brick Co Limited, 82 Gordon Street, Glasgow.

06/08/1891 – The Scotsman – Manager wanted for work near Glasgow. Must have a good knowledge of brickmaking machinery and be thoroughly acquainted with the working of the Hoffman kiln. Address to the secretary, Kelvinside Brick Co Limited, 82 Gordon Street, Glasgow.

17/03/1891 – Glasgow Herald – Wanted setters and burners for brickwork. Preference will be given to those accustomed to working the Hoffmann kiln. Apply to the secretary Kelvinside Brick Company Limited, 82 Gordon Street, Glasgow.

26/09/1891 – Lennox Herald –  On Saturday morning while Catherine Farrell, 16 Bridge Street, was setting up bricks in the kiln of the Kelvinside Brickwork, Crossloan Road, a pile of bricks fell on her, and she received serious injuries. Doctor P. McK. Short was sent for, and on examination, it was found that her left leg was broken in two places and several of her ribs fractured. The doctor dressed the injuries and she was afterwards removed to the Western Infirmary in an ambulance waggon.

23/09/1892 – The Scotsman – A serious accident resulting in injuries to three men occurred yesterday in the brickfield of the Kelvinside Brick Company at Crossloan Road, Glasgow. The three men, John Hart (41) foreman labourer and Arthur Kane (33) and Michael Leyden (24), labourers were engaged laying down drain pipes in the foundation of a kiln when about 3 tons of earth gave way and fell upon them. Hart was buried to the breast and Kane and Leyden to the waist and it was with considerable difficulty that they were rescued. It was found Hart has sustained severe internal injuries and Kane had three large wounds on the head. Both were removed to the Western General.

28/09/1892 – Aberdeen Press and Journal – On Thursday afternoon, an alarming accident, resulting in injury to three men occurred in Kelvinside Brick Field, Glasgow. It is intended to construct a lime kiln there and with this object, an opening had been made in the ground, ten feet long and five feet deep, to permit of the foundations of the kiln being laid. The men were working the foundations when three tons of earth fell on them. One man was imbedded up to his neck almost and sustained very serious injuries. Another sustained three cuts in his head of a pretty severe kind. A third, whose injuries were not bad, was taken home. 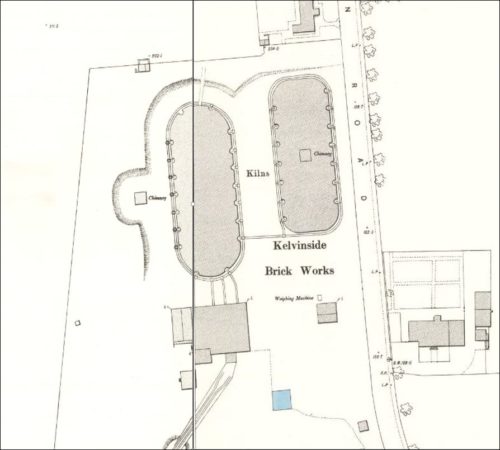 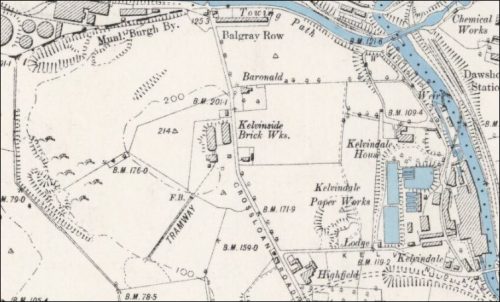 24/09/1898 – The Kelvinside Brick Company appealed against the valuation of £300 put upon a number of kilns they had erected upon their premises also upon a considerable amount of machinery with the assessor valued apart from the brickfield. An agent pleaded that under the Amended Valuation Act of 1895, section 3, which exempted from valuation coke ovens or other structures in which coal or other minerals were treated, where the rent stipulated to be paid in respect of such minerals was collected on the coke or other minerals as treated in the ovens or other structures, the company was exempt from the valuation set upon the kilns and machinery. The court took the matter to avizandum. A number of other appeals were also dealt with and the court afterwards adjourned.

18/12/1900 – Glasgow Herald – Loss estimated at £1200 was caused last night by an outbreak of fire in the premises of the Kelvinside Brick Co Ltd, Crossloan Road.

22/12/1900 – Airdrie and Coatbridge Advertiser – Kelvinside Brickworks, Glasgow have been totally destroyed by fire. The loss is estimated at about£2000.

15/09/1905 – Milngavie and Bearsden Herald – Patrick Friel, David Geddes and Patrick Lichan, labourers, Maryhill were found at Dawsholm Brickworks occupied by the Kelvinside Brick Co Limited on Wednesday 6th September in a brick kiln. They were taken to Dumbarton the following day and brought before the Justice of the Peace Court where they were each sent to prison for 5 days.

19/10/1906 – Milngavie and Bearsden Herald – Reference to 3 men being charged with trespassing at Dawsholm Brickworks.

13/10/1913 – The Scotsman – Sale of brickwork plant, machinery, buildings etc at Dawsholm Brickworks, Maryhill, Glasgow on Thursday 06/11/1913 at 12 0’clock. Shirlaw, Allan & Co have received instructions from Messrs the Kelvinside Brick Co Ltd owing to the termination of lease – to sell by auction as above. Hamilton October 1913.