It is suggested that wherever there is mention of the term ‘brickfield’ then it is entirely possible that this represents a temporary kiln and brick manufacturing set up.  It is possible that the excavated clay and the kiln are used to manufacture bricks to build a nearby structure and once this structure is finished then the excavations stop and the kiln is dismantled.

A History of the North British Locomotive Co Ltd, 1903 – 1953 – NBL Publication 1953 – Dubs & Co – The ambitions of Henry Dubs who was a managing partner with Neilson & Co had him sever his connections with that Co. in 1863.  He established his own works in Polmadie which was then known as “Little Govan”, Dubs organising genius was given full play in the planning and construction of his factory when having personally cut the first sod on the site in April 1864 the subsequent excavations of clay were used in the making of the bricks from which the offices and works buildings were constructed.  During recent digging there, one of the original bricks was unearthed showing clearly the “Diamond” nameplate he used as a trademark and which has subsequently been adopted for the present Co. Nameplate.

The James Watt Dock, Garvel Park, Greenock – James Watt Dock commenced construction on 1st August 1878 and was completed in 1886. It was conceived to allow Greenock to compete with Glasgow with the aim of attracting transatlantic shipping traffic and establishing Greenock as “one of the greatest and best equipped British seaports”

At the time of development James Watt Dock was believed to be the only dock on the Clyde where vessels of large tonnage could be kept afloat at all states of the tide. However, the development of the dock was not cheap. The original budget was estimated at £242,885 5s 3d however, the actual outlay by 1886 was £634,343 8s 3d (or £850,000 including the price of the land).

The justification for such an undertaking (and substantial debt) was the great and rapidly increasing volume of trade passing up the Clyde to Glasgow. It was thought at the time that such a facility would allow Greenock to benefit from the larger ships which were being used for trade and passenger traffic that were constrained in their draft to navigate the upper reaches of the Clyde at anything below high tide.

For a period of time, this belief held true and allowed Greenock to enter a period of unexampled expansion. In conjunction with staple industries (such as sugar refining and shipbuilding), the boom in trade fuelled significant development leading to the growth of the town.

26/8/1869 – North British Daily Mail – The city of Glasgow Union Railway … From the Gallowgate northwards the properties have been acquired, and the buildings are in course of demolition preparatory to commencing the construction of the Railway. On the north side of the Gallowgate, there will be another passenger station, which, from its proximity to the Cross, will be in a very convenient situation. In the College Green, where an extensive goods station is to be formed, the material to be excavated being clay, a brick held has been established, and a machine turning out twelve thousand bricks a day is at work. EAst of the College, the ground being at a much higher level the line will be below the surface and will pass under the streets …

24/10/1879 – Greenock Advertiser – The James Watt Dock, Garvel Park, Greenock – Construction update – “… The three new brick kilns mentioned in our last notice as about to be erected have been completed and since that time have been constantly worked …”

25/10/1879 – Greenock Telegraph – The James Watt Dock, Garvel Park, Greenock – Under construction – A group of gentlemen and dignitaries are invited to view the works. Reference to a Bradley and Craven (Wakefield) brick making machine is at work at the James Watt Dock. This machine turns out 12000 bricks per day and since it began operations about 1,002,000 bricks have been made from the clay at Garvel Park. 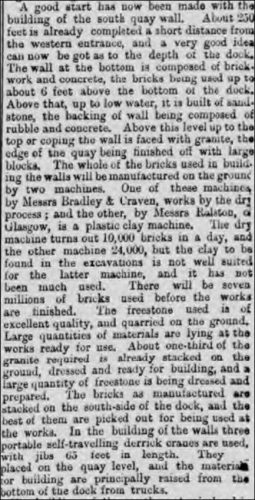 Below – 11/03/1881 – Greenock Advertiser – The James Watt Dock, Garvel Park, Greenock – details temporary kilns erected on-site to utilise the clay and manufacture brick for the construction of the docks and ancillary buildings. 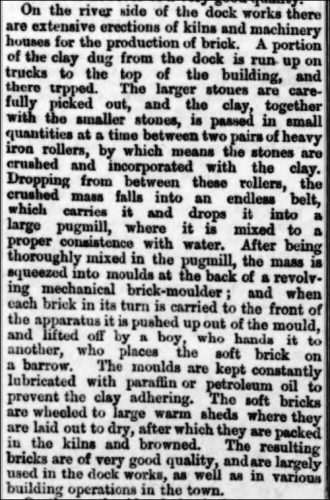 01/05/1885 – Glasgow Evening Post –  … The James Watt Dock, Garvel Park, Greenock – “A large number of the bricks used in the under-building of the dock walls were made from clay obtained on the spot, the bricks being manufactured and dried on the ground under the direction of Messrs Waddell” … (Note – SBH – I assume these bricks were then fired on site in a temporary kiln although it does not specifically record that in the article).

Similarly,  when Robert McAlpine built the huge Singer Company Works at Kilbowie, Clydebank,  he utilised a nearby clay source to manufacture bricks.

At this time, Robert McAlpine was involved with the construction of the College Station, part of the North British Railway. Apparently, the clay dug during this construction was used for making the bricks for the Singer Factory.  This ready-made brickfield was utilised to the advantage of all. Some of the bricks made also found their way back to the College Station and the NBR and were used to line tunnels and build retaining walls.

It is highly likely he would have set up temporary kilns and he may have transported the clay to local brickworks. He would certainly have used bricks manufactured at his own brickworks but as 20 million bricks were required he may also have collaborated with other local brickmakers to ensure a steady supply of bricks to his bricklayers.

At the time McAlpine was believed to be operating brickworks at Stonefield, Blantyre and Kelvinside and Hamiltonhill. 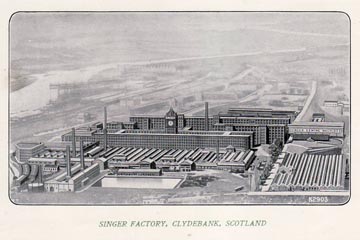 Below – Extracts from Sir Robert McAlpine and Sons: The Early Years by Iain Russell.

… The bricks used to line the London Road tunnel (part of a 3-mile section of Railway – Tollcross Railway between Bridgeton Cross and Carmyle) were obtained from McAlpine’s own brickworks, built close to the site and producing bricks made of clay from the tunnel excavations … (This sounds like a temporary brickworks solely constructed to utilise the excavated clay and provide bricks for the job in hand)

… McAlpine often built a brickworks near one of their sites as they did at Provan Gasworks and near Prince’s Dock, and clay and sand from excavations were used in the production of McAlpine bricks …

… The ground in which the dock (Robert Stevenson & Co’s graving dock, River Tyne, Newcastle ) was to be built was made up of boulders, sand, clay gravel and slag tipped there by local foundry owners. McAlpine used the clay and sand to make bricks and the stone and slag for concrete aggregate …