(Note – SBH – The references below indicate the continued occupation of the Hamiltonhill Brickworks by the Allan family for some considerable time. There are a couple of grey areas with regards to the 2 newspaper articles dated 1873 and 1891 in that they are for the sale of Hamiltonhill Brickworks. I am assuming these are the same brickworks and if they are it appears they may have been sold with the Allan’s as sitting tenants and it appears that after the sales they were permitted to continue occupancy. Unless they refer to 2 different brickworks, Hamilton Hill is often referenced below as being in Springburn whereas the old OS maps suggest that the Possil Brickworks were in the Springburn area).

(Note – SBH – Both Robert McAlpine and William Allan appear to have been working the Hamilton Hill Brickworks at the same point. Wilson and Co and William Allan are also at the works at the same time. I am not sure that this is the case and I suspect they may have operated individually and been owner/lessee but until I can clarify and confirm I will leave them ‘doubled up’ here).

Extracts from Sir Robert McAlpine and Sons: The Early Years by Iain Russell – While building in Stonefield (1872 – 1874), Robert discovered not only how great a saving he could make on his costs by manufacturing his own bricks, but that he could get a good price from other builders working in the area for any surplus he produced. He continued to lease the Stonefield works for the rest of the decade and he took leases out on Hamiltonhill and the Kelvinside Brickworks, both in Glasgow, in 1873 and 1877 respectively. As he does not seem to have tendered for contracts in the Glasgow area at this time, it is likely that the bricks he made there were sold to other builders …

1858 – Mineral Statistics of the United Kingdom of Great Britain and Ireland for 1858 – Hamilton, clay of coal measures. Name of freeholder – Duke of Hamilton. Manufacture – Bricks and tiles.

1870 – 1871 – Wilsons and Co, brickmakers, Hamilton Hill Brickworks, off Possil Road, Springbank, Glasgow. (Note – SBH – I am confused with Wilson and Co apparently being associated with the Hamilton Hill Brickworks at this time as it appears that William Allan were operating at the same time. Perhaps Wilson and Co, owned the works and leased them to William Allan. Wilson and Co were also coal masters working the Possil Colliery, Springbank at this time).

Below – 17/02/1873 – Glasgow Herald – Advert for the sale of the sequestrated Estate of Robert Taylor including the “brickworks, Hamilton Hill, Possil Road, Glasgow”… (Note – SBH – So was Robert Taylor the owner and were William Allan and Co leasing the site? Or is this a totally different enterprise. Hamilton Hill Brickworks is very confusing!) 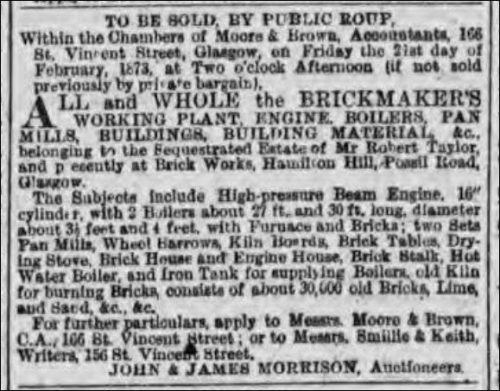 1875 – Hamilton Hill Brickworks, Possil (Maryhill) was operating in 1875.  It was owned by The Caledonian Railway Company and Robert McAlpline was leasing it that year for £55 a year, occupying the land also as a business. This is confirmed in the 1875 valuation roll.

1875 – Robert McAlpine was living at Burnbank Road, Hamilton, although he was letting out a house and stable at Stonefield Brickworks to Robert McAlpine (perhaps his son or father?) and also letting out a block of homes called McAlpines Buildings at the corner of Glasgow Road junction with New Station Road, (a road that following 1900, became known as John Street). As can be seen from the clipping Wm Allan & Co were also operating from the same brickworks at this time  – click me  –  (Many thanks to Paul Veverka).
07/06/1876 – North British Agriculturist – ln the Hamilton Sheriff Court on Monday, Francis Turner, engineman, 8 Kelvindale Road, Maryhill, Glasgow, sued Robert McAlpine, brickbuilder, Hamilton, for £105 as reparation for injury sustained by him while employed as an engineman in the defender’s employment at Hamilton Hill Brickwork, Possil Road, Glasgow, on 2d November last. Proof in the case was led. It appeared that the pursuer, while working a beam engine, had occasion to stop it, and in order to start the engine again he had to use a “pinch” to the flywheel. He had no sooner done so than the engine went suddenly off. The “pinch” knocked him down and pinned him to the ground until he was extricated by his fellow-workmen. He was seven weeks confined to his bed and was now only able to earn 18s per week, while before he had a wage of 30s. The defender maintained that before using the pinch the pursuer should have shut off the steam. The Sheriff gave effect to the plea that he had been a contributory to the accident, and decided against the pursuer. Mr W. Barclay appeared for pursuer, and Mr J. B. Souttar for defender.

21/06/1879 – Dundee Evening Telegraph – Sad death of a boy in Glasgow – Yesterday a labourer was passing near unoccupied brickfield at Hamilton Hill when he noticed that old chimney stalk had fallen. Going nearer he saw the body of a boy lying below some of the fallen bricks. He at once removed the debris but found that the hoy was quite dead. It has been ascertained that the boy, along with two others, was playing in the brickfield on the previous night, and it is stated that the deceased took a brick out of the base of the stalk, causing the whole to fall. A great cloud of dust was raised, and the other boys, not seeing their companion after it cleared, supposed that had gone away himself and, frightened at what had occurred, they did not say anything about it, anybody. Dr Sloan, who examined the body, is of opinion that death must have been instantaneous.

01/04/1891 – Glasgow Herald – Sale of Colliery and Brick Work Plant at Hamiltonhill Collieries, Rockville, Glasgow – 16/04/1891 12 o’clock. Shirlaw, Allan & Co beg to intimate instructions from Dugald McAlister Esq, Liquidator of the Hamiltonhill and Cowlairs Colliery Company Limited to sell by auction as above the whole colliery and brickworks plant there comprising:- pumping, winding, grinding and haulage engines, pan mills, boilers, pithead frames, cart and hutch weighing machines, pit pump flues, pit rails, smithy tools, also the whole buildings of offices, boiler seats, kilns, engine stalk, coke ovens and mountings. The material of which is suitable for re-erection. Catalogues in preparation and may be had from the auctioneers. Cars from Union Street to colliery every few minutes. Hamilton 26/03/1891

Marshall v Allan. – A settlement was intimated of the action in which Marion Logan or Marshall, 19 Lyon Street, Glasgow, sued William Allan, Jun., brickmaker, Hamilton Brickworks, Possil Road, Glasgow, for payment of £1000 to herself and £1000 to her two children.  On 11th February last the pursuer’s late husband was working in the service of the defender as a labourer at a cutting within the defender’s brickwork, whom a large position of clay fell upon him, inflicting fatal injuries.  The pursuer stated that the deceased met his death through the fault of the defender in failing to take adequate precautions for his safety.  The defender explained that the accident arose from causes out-with his control.  The pursuer has accepted £150 in full of her claims.
Counsel for Pursuer-Mr Orr.  Agents-Inglis & Orr, S.S.C., and John Drummond, writer, Glasgow. Counsel for Defender-Mr Glegg.  Agents- Macpherson & Mackay, W.S. 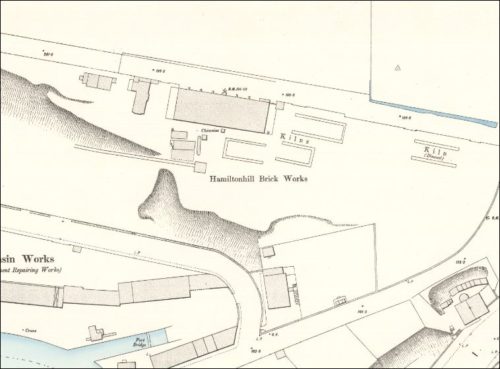 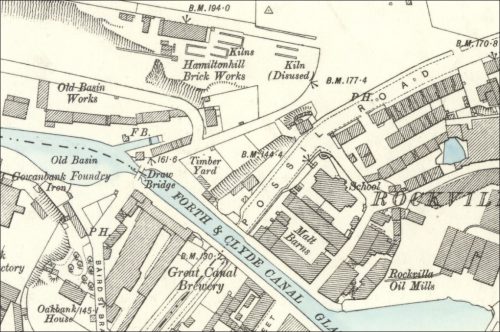