1858 – 1861–  A Field suitable in soil for making building bricks. There is a Kiln for baking them near the south of the field. It (the field) has been used for Brick making during these last eighteen years. It is expected to be wrought out in two years time. The property of W. Forest Esqr. Wrought by J. Craig of Birdsfield.

Below – 1859 – Stonefield Brickfield – “A field suitable in soil for making building bricks. There is a kiln for baking them near the south of the field. It has been used for brick making during these last eighteen years, since 1841. It is expected wrought out in two years time. The property of W. Forrest Esquire. Wrought by J. Craig of Birdsfield.” Source – 1859 valuation Roll Reference 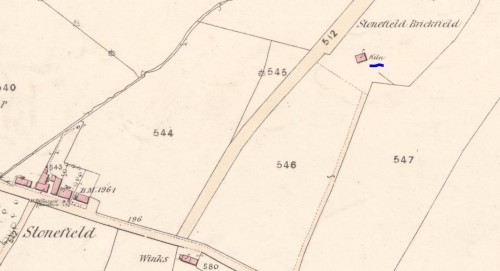 20/11/1860 – Edinburgh Gazette  –  Sequestration of William Wilson, Brick and Tile Maker, residing at Stonefield, in the Parish of Blantyre, and County of Lanark. William Mudie, Junior, Chartered Accountant in Glasgow, Trustee on said sequestrated estate, hereby intimates, that the Commissioner has audited his accounts, brought down to 3d instant, postponed payment of a dividend till next statutory period, and dispensed with sending circulars to Creditors. William Mudie, Jnr. Trustee. Glasgow, November 17, I860

18/04/1863 – Hamilton Advertiser – Stonefield Brick and Tile Work in the parish of Blantyre (as possessed by Mr Cameron who does not offer) is at present to let. For particulars apply to John Clark Forrest, City of Glasgow Bank, Hamilton or Beechmont, Cambuslang 31/03/1863.

In 1875, Robert McAlpine was living at Burnbank Road Hamilton, although he was letting out a house and stable at Stonefield Brickworks to Robert McAlpine (perhaps his son or father?) and also letting out a block of homes called McAlpines Buildings (built in 1874?) at the corner of Glasgow Road junction with New Station Road, (a road that following 1900, became known as John Street).
As can be seen from the clipping Wm Allan & Co were also operating from the same brickworks at this time – click me – (Many thanks to Paul Veverka).

22/07/1875 – Glasgow Herald – Blantyre, serious incident. A lad, named James Johnston, 11 years of age, residing with his father, a carter at Stonefield, met, on Tuesday night with an unfortunate accident at Mr McAlpine’s Brickwork.  He got entangled about the engine and was drawn in and very badly hurt before it could be stopped. His right arm was fractured in several places between the elbow and the hand and he was otherwise cut and bruised. Dr Downie, who attended, ordered the lads removal to Glasgow Infirmary.

04/06/1885 – Southern Reporter – About 3 o’clock on Sunday morning fire broke out in a wooden shed used as a stable and store at Stonefield Brickwork, Blantyre belonging to Messrs Tinto & Stevenson, brick manufacturers. The shed was burned to the ground along with 2 ponies and a quantity of harnesses.

Below – 27/08/1888 – Glasgow Herald – Stonefield Brickfield near Blantyre Station for sale. 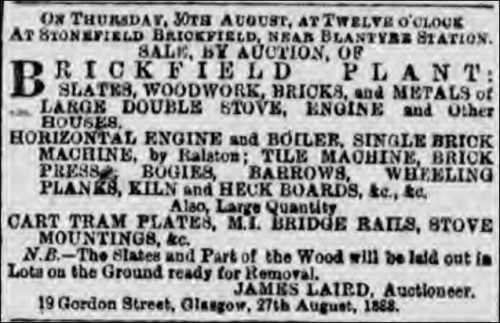 The works are not depicted on the 1897 – The only reference is to an ‘Old Clay Pit’.