(Note – SBH – This would appear not to be part of the Blochairn Sand and Fire Clay Company albeit it was probably situated very close by).

19/07/1899 – Glasgow Herald -A special sub-committee of Glasgow Corporation on the utilisation of the clay in the lands of Eastern Blochairn has decided to recommend the Corporation to erect and carry on a brickwork as the bricks will be required in the construction of the new gas works there.

and on the same page of the newspaper

A corporation brickwork at Blochairn – The special Sub-Committee on the utilisation of clay in lands of Easter Blochairn have had before them a report by Mr David Rankine, C.S. and Mr Foulis.  It states:-“There have been a large number of bores put down and several pits sunk on the lands of Easter Blochairn for testing the subsoil of the site upon which the new gas-works are to be erected upon these lands.  The journals of bores have been considered, and the pits examined by us so that we might advise as to whether the clay disclosed therein is suitable for brick-making, and whether it is advisable for the Corporation to make it into bricks for the construction of the said new gas-works.  The clay is light-coloured blue boulder clay, interspersed with small stones.  It has been tested at Possil Brick Works in practical manufacture, and makes, a palish red-coloured brick of good quality for general building purposes.  In connection with the erection of the purifiers at the new gas-works, there will be a surplus excavation of about 136,500 cubic yards of this clay, which would produce about 40,000,000 bricks.  At other places, there will also be surplus excavations of similar clay, and the quantity might be otherwise greatly increased if that should be found expedient, as there is a great depth of clay.  There is to place of deposit on the lands for the surplus excavations and it is apparent that, if they have to be taken to other lands, the expense will be incurred corresponding to the distance to which they may have to be carried.  There will be a large quantity of bricks required in the construction of the new gas-works, one of the gas-holder tanks alone requiring about 4,000,000.  If the surplus excavations were made into bricks the following economic and savings would be effected:-Expense of removing the surplus excavation to other lands, which might be moderately put at 1s per cubic yard: (2) carriage of bricks into brick-works, situated some distance from Blochairn, which might be put at not less than 1s per ton, or, say, 4s 6d per 1000 bricks; (3) the lordship which makers have to pay to proprietors on the clay made into bricks, and which may be taken at 9d per 1000 bricks.  These three items, which make no allowance for makers’ profit would amount, on 40,000,000 bricks to £17,325.  If brick-works were to be erected on the grounds they would have to be a lot of capacity that would use the surplus excavations quickly.  Two machines worked single shift, would produce 5,500,000 bricks a year, and if double-shifted 11,000,000.  the only extra plant needed for double-shifting is increased kiln accommodation.  On careful consideration of the whole matter, we would recommend that a work be created consisting of two machines, with Hoffman kilns, equal to the production of 11,000,000 bricks per annum, and this, we estimate, could be done for £8000.  It is apparent, from what is hereon obtained, that such a work would facilitate the creation of the new gas-works, would provide a brick wall suited for use on the grounds, and would leave a large margin of profit in addition to paying the cost of the erection of the brickworks.”  The sub-committee recommend (1) that the plant referred to in the report be put down and worked by the Corporation upon said hands for the purpose of utilising the clay found therein for making the bricks which will be required in the construction of the new gas-works there: and (2) that Mr Rankine be employed to prepare the necessary plans and specifications for the plant and any requisite buildings, and to superintend the pulling down of the plant and the erection of the buildings; and that Mr Foulis be authorised to obtain and submit offers for providing the plant and erecting the buildings. 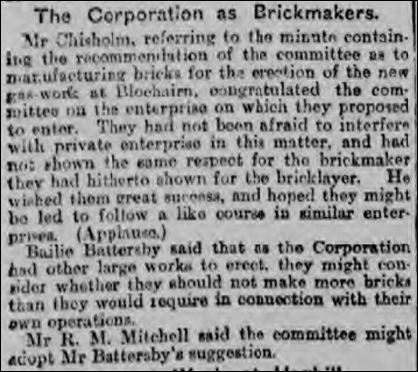