Greenhill Fireclay Works, Clayknowes, Bonnybridge – Alexander and John Scott owned the farm and brickworks at Clayknowes and Cadgersgate according to the valuation roll of 1865, Slater’s Directory of 1867, refers to the Greenhill Fireclay works being worked by Scott & Walker.  The brickworks is not shown on the maps of 1854, so it probably started about 1860.   The Greenhill Fireclay Company had passed into the hands of the partners, William Brown and Thomas Brownlee of Glasgow and George Caddell Bruce of Edinburgh by 1875.  Brownlee and Bruce still owned it in 1880, but by 1895 when it was owned by James and William Wood, the brickworks was in ruins.  The site was used by several explosive manufacturers before and during the First World War and suffered several accidental explosions. No more bricks were made on this site, although a Greenhill Fireclay Company was incorporated in October 1920, with James Ferguson, Managing Director of Lane & Girvan, the Bonnybridge iron founders, one of the principal shareholders.  This company was liquidated in 1922, when Ferguson took an interest in the re-structured Glenyards Fireclay Company at Greenhill Railway junction, as a Director of James Anderson & Co. Ltd. Source – Kenneth Sanderson.

This site refers to the Greenhill Fireclay company closing in 1922 but reopening the same year and closing again in 1952 – source.

01/12/1864 – Falkirk Herald – To Brickmakers. Wanted, a good hand at brick making; likewise a can maker. Liberal wages will be given – apply at Greenhill Brickworks by Denny

15/11/1866 – Falkirk Herald – Strayed from the Greenhill Fire Clay Works, Denny – a brown retriever dog answering to the name ‘Sailo’. The finder will be rewarded on returning it to the works, and if found in possession of anyone after this intimation they will be prosecuted. 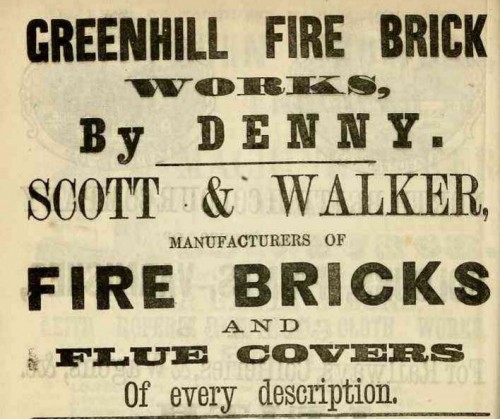 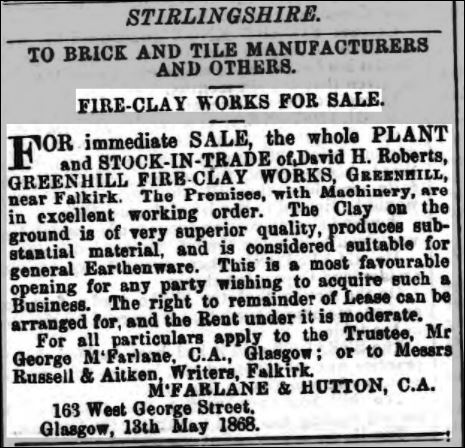 05/06/1868 – Northern Warder – A late farmer convicted of fraud. In the Sheriff Court on Wednesday, before Sheriff Smith, John Scott, late farmer and lessee of brickwork at Clay Knowes, Falkirk, was charged with falsehood fraud, and wilful imposition, (1) insofar on the 28th December 1866, within the public house South Union Street, Dundee, occupied by Charles Ormond he did represent himself as agent for Messrs Boyd & Spence, coal masters at Rather Colliery, Wishaw, and receive the sum of £7 3s 8d being the price 22 tons 2 cwt of coals, less £2, previously paid to the said John Scott in loan: and (2). with having, in the month of September 1866, obtained the sum of £1 4s 3d from the firm of Messrs Sturrock & Sheriff, builders, Dundee, as the cost of carriage of 1300 bricks from Greenhill Brickworks to Dundee, which he falsely represented he had paid to the Railway Company. The accused pleaded guilty, explaining that though he had obtained the sums in the manner described in the indictment, he intended to repay them. The Sheriff passed sentence sixty days’ imprisonment.

19/01/1869 – Perthshire Courier – Creditors of David Henderson Roberts, brick and tile maker, Greenhill Fire Clay Works in the parish of Falkirk and county of Stirling meet in the office of McFarlane and Hutton, 165 West George Street, Glasgow 9th February at 12 o’clock.

1869 – Thomas Brownlie plus two others (William Broom or Brown?) formed the Greenhill Fireclay Company by acquiring a property known as Clay Knowes near Greenhill Junction.

Kenneth Sanderson states – William Brown and Thomas Brownlee of Glasgow and George Caddell Bruce of Edinburgh formed the Greenhill Fireclay Company but it could have been William Broom, not Brown as evidenced in this advert below or is the advert wrong and should it read Brown, Brownlie and Bruce?

29/09/1870 – Falkirk Herald – Contractors wanted – for Carting Goods from Greenhill Fireclay Works, on the Lands of Clayknowes, to Greenhill Railway Station. Also, Coals from said Station to Works. Contractors to state price per ton for coals, and per 1000 for Bricks. Full particulars will be given on application to James Affleck, Clayknowes, by Denny.

Below – 1878 – A reference to Clayknows in Slaters Advertiser for Denny Stirlingshire but also note the reference to Glasgow.

01/09/1870 – Falkirk Herald – Contractors wanted for carting fireclay goods from Greenhill Fireclay Works on the lands of Clayknowes to Greenhill Railway Station. Also coals from said Station to Works. Contractors to state price per ton for coals and per 1000 bricks. Full particulars will be given on application to James Affleck, Clayknowes by Denny.

Below – 01/04/1880 – Falkirk Herald – Sale of farmland at Clayknowes as owned by the Greenhill Fireclay Company. 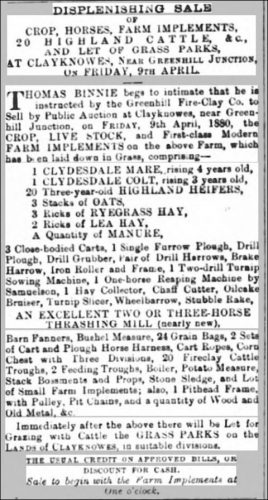 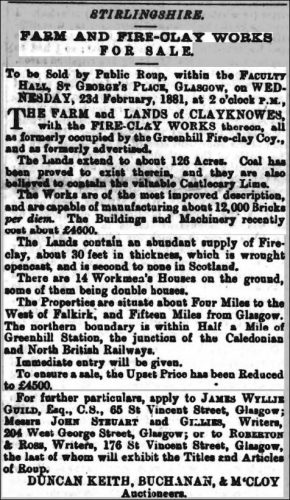 11/04/1881 – Aberdeen Press and Journal – City of Glasgow Bank shareholders – A meeting of the creditors of Thomas Brownlie, coal and quarry master in Glasgow, a partner of the Heatherknowe Coal Company, The Blochairn Quarry Company, the Greenhill Fire Clay Company and the City of Glasgow Bank was held at the Faculty Hall, Glasgow on Friday afternoon. It was stated that the bankruptcy had been caused by the depression of trade produced by the failure of the City of Glasgow bank and by the difficulty in realising trade assets …

Below – 27/04/1881 – Glasgow Evening Post – Bankruptcy – Thomas Brownlie plus two others (William Broom or Brown?) formed the Greenhill Fireclay Company by acquiring a property known as Clay Knowes near Greenhill Junction in 1869. 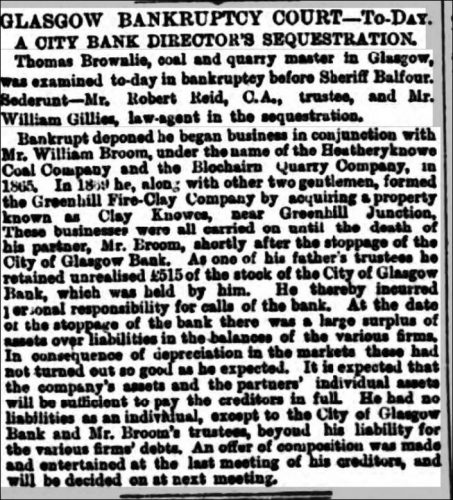 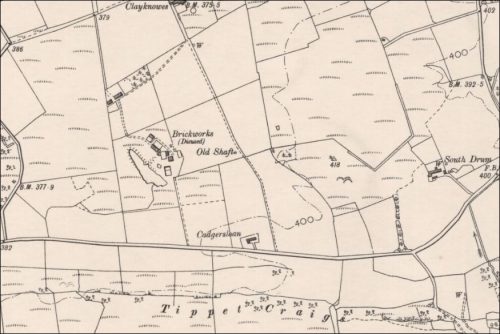 02/9/1899 – Airdrie and Coatbridge Advertiser – On Wednesday when a clay worker named Henderson, employed at the new brickworks, Greenhill, Bonnybridge, was engaged removing a quantity of clay by holeing underneath the mass, it suddenly came away, burying him underneath. Assistance was immediately rendered, and Henderson was dug out of his painful position. He was badly crushed and injured internally. He was removed to Glasgow Infirmary. (Note – SBH – It is possible these works were closed for a period of time in the 1880′ to 1890s as the map of 1896 stated they were disused)

18/06/1927 – Falkirk Herald –  The employees Messrs James Anderson & Co., Ltd., Greenhill Firebrick Works, held their annual outing on Saturday last, Aberfeldy being their destination, and the mode of travel being by motor charabancs. The outward route chosen was via Stirling, Crieff, and the Sma’ Glen, where an alfresco luncheon was enjoyed and then via Amulree to Aberfeldy, where dinner was later partaken of. The homeward run was made via Loch Tay, Killin, and Strathyre, where a halt was made. Here the party was entertained to an excellent tea by the firm in Munro’s Temperance Hotel, the generosity of the directors being greatly appreciated by all. After another brief halt at Callander, the last portion the run was entered upon, home being reached about 10 p.m.

05/06/1937 – Falkirk Herald – The employees of James Anderson & Co., Ltd., Greenhill Brickworks, held their annual outing last Saturday. The destination was Kirkmichael, by way of Kincardine New Bridge and Glenfarg, returning by Dunkeld, Amulree and Sma’ Glen to Crieff. Dinner was provided at Kirkmichael Hotel, and high tea at the Station Hotel, Crieff. At the dinner, Mr Robert Halliday acted as chairman, and in name of the workers thanked the firm for their steady employment throughout the year, and particularly for their handsome donation, which provided the bus, dinner and tea, free of cost to the workers and their wives. Mr Anderson, director, and Mr Mitchell works manager thanked the chairman and workers for their appreciation. At Crieff, the party was joined by Mr A. Forbes Hendry. LL.B, M.A., interim managing director of the company, Mr Manson, of the Cannerton Brick Company and Mr and Mrs Melvin. Mr Hendry addressed the party, and his remarks were much appreciated. Mrs Andrew Miller and Mr Joseph Malloy contributed to the musical part of the programme with much acceptance. Arrangements for the outing were in the capable hands of Mr Andrew Miller and Mr John Cairns, and they were accorded a hearty vote of thanks. 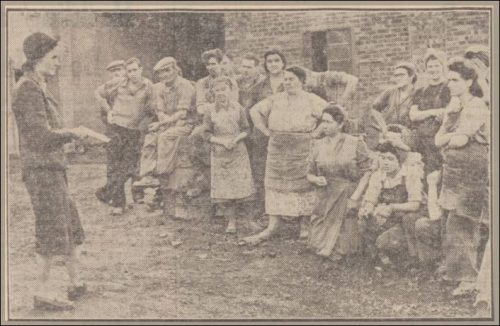