Source for information below is from the Carluke Parish Historical Society.

John Loudon had his own grocer’s and draper’s business in Newmains. He joined Archibald Miller in partnership in 1873 as a joiner, builder, brick maker and contractor.

The joiners business was successful for 4 years. In 1873 they took a coalfield and brickfield at Mauldslie and started brick production. The colliery opened in 1875 after 2 years boring.

The joinery and contracting partnership was dissolved about 1877.

Miller then started Stonefield Sawmill in Blantyre. Loudon started as a flesher in Sauchiehall Street and lasted 9 months. He then went into confectionery and preserve in Campbell Street, Glasgow at a cost of £1000. Again he lost all. He then became the manager of the colliery and brickfield.

Sequestration proceedings were begun in July 1881.

Below – 01/05/1872 – Glasgow Herald – Quarries and Freestone Rocks to let on Mauldslie Estate, Carluke….several extensive basins of common clay to let … An ample supply of fireclay and coal may be had on the ground … 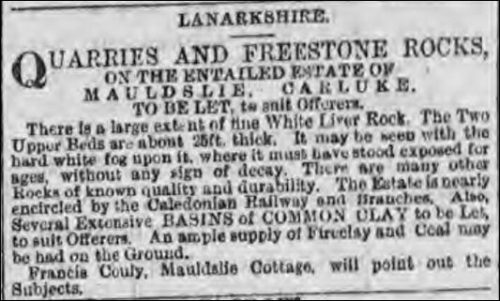 19/01/1877 – Glasgow Herald – Manager wanted for Mauldslie Brick and Fire Clay Works, Carluke. Must understand all the branches. Applicants to produce certificates of character and ability and wages expected – Loudon and Miller, Overtown. 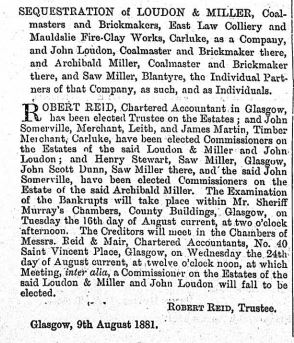 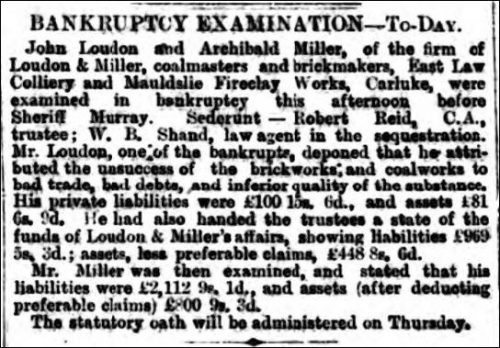 01/04/1882 – The Scotsman – Creditors of Loudon and Miller, coalmasters East Law Colliery and Mauldslie Fireclay Works, Carluke will receive a dividend 16th May in the office of Reid and Mair, 40 St Vincent Place, Glasgow. 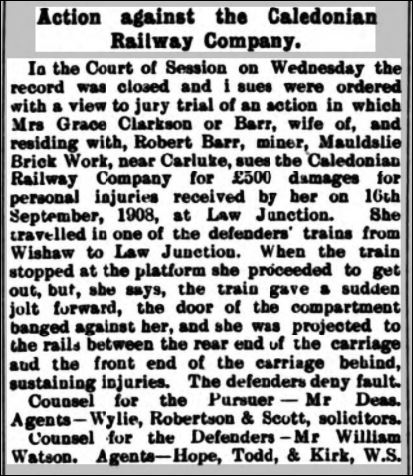 20/03/1909 – The Scotsman – Mrs Barr v Caledonian Railway Company – Intimation was made that the action has been settled in which Mrs Grace Clarkson or Barr, wife of and residing with Robert Barr, miner Mauldslie Brickwork near Carluke sued the Caledonian Railway Company for £500 damages for personal injuries received by her on 16th September 1908 at Law Junction. The defenders denied fault but they have now paid the pursuer £105 and expenses and the action was taken out of court by joint minute …