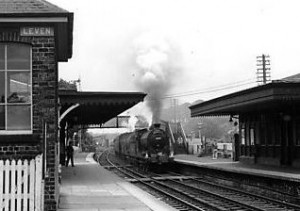 A considerable portion of Leven was built from bricks manufactured at Leven Brick and Tile Works by the side of Scoonie Road. For 50 years the works were carried on by Mr Alexander White and his son, Mr John White, an ex provost of the Burgh, under the name of John White & Son. Operations were stopped at the works in 1880. In addition to manufacturing bricks and tiles, Messrs White and Son did a considerable business in the ochre trade, one of the oldest industries in Leven.

Mr Brewster in the ‘New Statistical Account’ says”about the year 1802 a bore was put down near Scoonie Bridge which reached the bottom of the main coal, or a depth of 35 fathoms. This bore, besides the upper seams of coal, passed through a stratum of ochre upwards of 4 feet thick and 3 seams of fire clay, 2 of which are of the finest quality.

A bed of ochre 4 feet thick, lying on the estates of Durie and Aithernie has been wrought for several years of which a considerable quantity is exported. Messrs Landale had a considerable output of ochre at their Sillerhole Pit, and away further up the Den in the Aithernie direction. Mr John Anderson operated the same seam of ochre with an ‘in going eye’. On the ochre being drawn from the mines, it was conveyed to Messrs White’s and Anderson’s works and there it was treated by grinding mills and exported in ships from the harbour to all parts of the country. In 1835, 191 tons of ochre, representing a value of £573, were exported from Leven. At one time a considerable business was done in red ‘keel’ from Kennoway Den. The ‘keel’ was used principally for marking sheep and the Leven ochre will remind older people of the days when the ‘buts and bens’ of the working class were actually painted by artistic matrons with an orange or canary tint. Source p76

The start of the 19th century saw the benefits of steam power, and the industrial and agricultural revolutions increased demand for roofing tiles and clay drainage tiles. The General View of the Agriculture of the County of Fife, drawn up by the Board of Agriculture & Improvement and published in 1800, noted that: “Brick and tyle are manufactured at Cupar, Kirkaldy, and Leven. About 750,000 are made annually and the duty is about £300.” source

04/08/1831 – Fife Herald – Brick and tiles for sale – The public is respectfully informed that there is always on sale at the Leven Brickwork a large quantity of superior bricks and tiles and drain tiles and fire bricks on reasonable terms. Leven Brickworks – 29/07/1831

02/05/1839 – Fife Herald – Brick and Tiles. The Public are respectfully informed, that they now can be supplied with any quantity of drain and house tiles, also bricks of all descriptions. Leven Brick and Tile Works. 26th April 1839.

17/02/1859 – Fife Herald – Leven Brick, Tile and Ochre Works – Alex White begs to return thanks for the liberal patronage he has received; and begs further to intimate to his customers and the public in general, that he has at present on hand a good stock of all sizes of drain tiles from 1 1/2″ to 12″. Those at 6″ and upwards are 30″ in length. Also bricks and house tiles and every description of fire brick and chimney cans. As there is a siding into the Work, orders can be sent to any distance by rail which will be punctually attended to. Leven, 16/02/1859.

11/03/1862 – Dunfermline Press – On Thursday last, when Murray Sparks, servant to Mr White of the Leven Brick and Tile Works, was driving two horses and carts on the road between Balmain and Leven, the horses going at a good pace, and while Murray was standing in one of the carts, the horse in which stood still all of a sudden, causing the driver to fall forward out of the cart upon the road, whereby he was much injured about one of his shoulders.

03/11/1864 – Fife Herald – Praiseworthy. lt affords us much pleasure to notice that Alexander White, Esq., of the Leven Brick and Tile Works, has advanced the wages of his workmen ls per week and what has been his wonted custom for many years past has not been neglected by him this year, that of giving them an annual supper. This speaks more than words can in behoof Mr White’s liberality, and goes far, we hope, to cement employer and employed the happy bonds that should exist between them.

16/05/1867 – Fife Herald – Presentation. On the evening of Saturday last, Mr Thomas Horne, foreman the Leven Brick and Tile Works, was invited his fellow-workmen and a number of friends to meet them in Mr A. Cameron’s, for the purpose of giving him some tangible proof of their regard and esteem for him on the occasion of his going away to fill a similar situation at Cupar Muir Brickworks. Mr David Thomson, after a few brief remarks, in the name of the subscribers, presented Mr Horne with very handsome gold Albert chain. Mr Home, in reply, thanked them kindly for such unexpected and unlooked-for gift, after which, toasts, songs, and recitations followed, and all dispersed a reasonable hour, highly gratified with their evening enjoyment.

28/11/1867 – Fife Herald – On Friday last, Messrs White, of the Leven Brick and Tile Works, on their workmen concluding their labours of brick and tile making for the season, treated them to a substantial supper. Such kindness is exemplary and bespeaks a benevolent and kind disposition.

29/11/1867 – Dundee Courier – The other morning, when the workmen employed in digging clay at the clayfield of Messrs John white and Son, of the Leven Brick and Tile Works, were just about to begin their labours at a seam of clay twelve feet in thickness, and with covering of eight feet of earth on its surface, about twenty tons of the material fell. Had the slip occurred a quarter of an hour later, the workers would have been buried in the clay pit, and the consequences might have been fearful 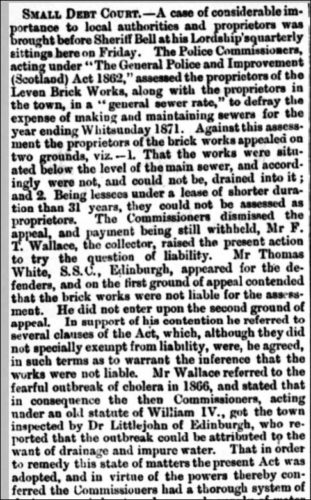 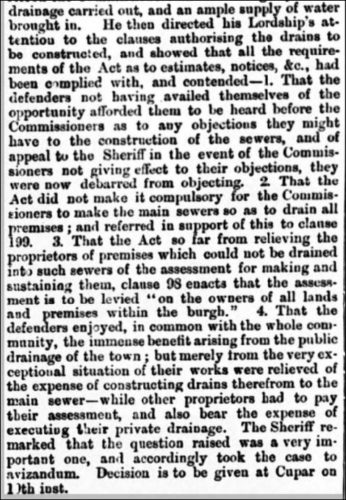 01/09/1876 – East of Fife Record – Sale of property – The self-contained villa at the Links belonging to Mr Smith, draper, was exposed for sale by public roup in the Caledonian Hotel on Friday last. The upset price was £775, but no offers were given, and thew present had left the room, when Mr Bowman, the auctioneer, obtained the consent of James H. Smith. Esq., banker, the agent for the exposer, to reduce the upset to £750. Parties were accordingly called back, when a spirited competition took place between S. Youden, Esq., solicitor, and Mr White, of Leven Brickworks, resulting in the latter becoming the purchaser at £830. The property was purchased a few years ago for less than £700, and the figure at which it was sold on Friday shows the increased value of property in Leven.

05/02/1878 – Dundee Courier – Between Saturday night and Sabbath morning the office of the Leven Brickworks was broken into, but, luckily for the proprietor (Mr White), there was no money in the office to take away. The thieves must have been greatly chagrined.

03/05/1879 – Fife News – Narrow escape – On Tuesday, a little boy, named Brewster fell into the clay hole at Leven Brickwork. This little lad along with others had been sailing boats when he fell in.  He was rescued by a bricklayer who leaped in for him and had him conveyed home much exhausted.

21/10/1882 – Glasgow Herald – Court Action – Leven Brick and Tile Works are attempting to sue the North British Railway Company for the sum of £700 as damages for the removal of a level crossing over their line.

23/05/1885 – Fifeshire Advertiser – Deaths. At Leven on the 16th inst, from the effects of an accident received at Leven Brickworks, James Swinley, aged 61 years.

15/11/1886 – Glasgow Herald – A court action by Alexander Whites trustees V Carron Company and others. This is to do with a claim and counterclaim regarding the underground mineral workings causing damage to the Leven Brick and Tile Works and others. White claimed £5000 but was only awarded £1070 damages.

11/03/1887 – Glasgow Herald – Duke of Hamilton V Whites trustees. This was an action of declarator brought by Thomas White, S.C.C., Edinburgh and John White, brick and tile manufacturer, Leven, the sole surviving trustees in the settlement of the late Alexander White, brick and tile manufacturer, Leven against the Carron, Company, ironmasters at Carron, Falkirk. The Duke of Hamilton, the Redding Coal Company and the trustees of the late Johan Theodor Salveson, merchant, Grangemouth, to have it declared that the defenders were not entitled to work the minerals in the pursuer’s lands at Muiravonside so as not to leave sufficient support for these or adjacent lands and further so as not to alter the surface of the lands and also for interdict for working the minerals so as to have the effect complained of, together with £5000 damages against the defenders with the exception of the Carron Company. The Carron Company pleaded in defence that the pursuers had no entitlement to sue; that in the circumstances stated, the action, in so far as directed against the Carron Company was premature and unnecessary and that the defenders right to the minerals was subject to no limitation entitling the pursuers to decree as concluded for. The please for the Duke of Hamilton and the Redding Coal Company and Salvesen’s trustees were to the effect that, on a sound construction of the titles, the defender’s right to the minerals in question was not subject to any limitation entitling the pursuers to the decree concluded for and that the defenders, not being bound to work the coal so as to prevent a subsidence of the surface should be assoilzied; that, having all along been willing to pay for any surface damage caused by their operations, the action was unnecessary; that the some concluded for was excessive and that the damage having been to a great extent due to the works prior to 1866, the defenders were not liable for any such damages is referable to these prior workings. In the outer house, Lord Fraser assoilzied the Carron Company but with consent gave decree of the declaration against the other defenders and found them liable in damages to the amount of £1070, with expenses. The Duke of Hamilton reclaimed on the question of the damages and their lordships today adhered to the lord ordinary’s interlocutor but reduced the damages to £800. The reclaimed was found liable in expenses … 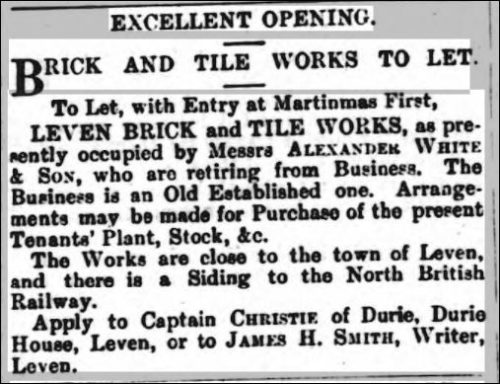 22/09/1888 – Fife News – One day this week about one o’clock, a man and woman, apparently both the worse of the enemy which steals away the brain, were observed loitering in the vicinity of Leven Brickworks. Shortly afterwards, the woman was noticed climbing the railway fence, followed by the man. Those who had observed this, on getting within seeing range, saw the woman, who was partially undressed, with her head lying on the rails apparently contemplating suicide, while the man was determinedly trying to prevent this. He forcibly dragged her up. The poor woman apparently changed her mind as to life not being worth living, as both then left the race. The 1.42 train rushed passed a few minutes later.

27/06/1901 – Leven Advertiser – Gathering to celebrate the 50th wedding anniversary of Mr and Mrs Thomas Gordon, South Street, Leven … Looking out for something better, Mr Gordon started in the employ of Mr Wilson, carting contractor, and after several years there accepted the offer of a place in Leven Brickwork. For close on eighteen years, he was, as Provost White kindly says, a trusted employee …

16/12/1908 – Leven Advertiser – Mr Lutit Swinton, joiner and builder informs patrons that he has acquired the Builders Yard at the Old Brickwork, Leven, lately occupied by Wilkie and Gibb.

Below – Believed to be a photo of John White, ex provost Leven, brick and tile maker. 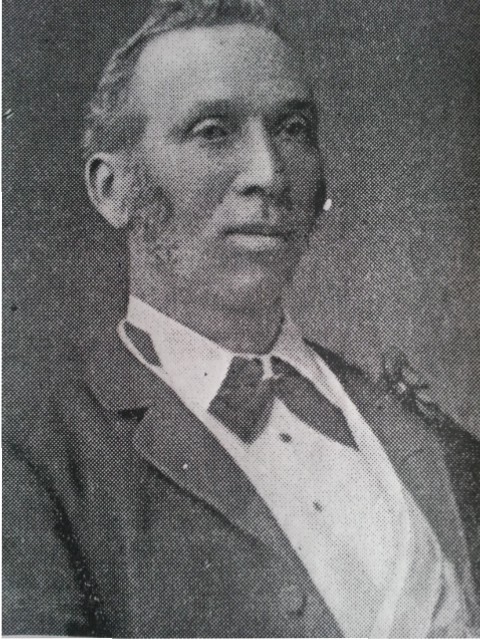