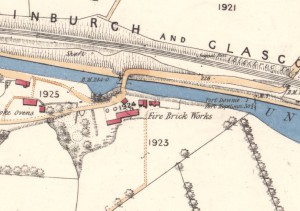 These works were started c. 1852 – 1856.  The valuation roll of 1856 details the brickworks as apparently unfinished but occupied. They were leased to Cowan, Walker and Company. – Alexander Cowan and Robert Walker. The brickworks were in business, certainly in 1867, according to the valuation rolls of that year. Robert Walker was managing director. Robert Walker and Son were running the business in 1873 but it had been demolished prior to 1899 – probably c.1882. They produced firebricks and composition bricks and sold fireclay. See entries in Slaters Advertiser 1852,1867 and 1882. Source – Falkirk Museum and Archives. 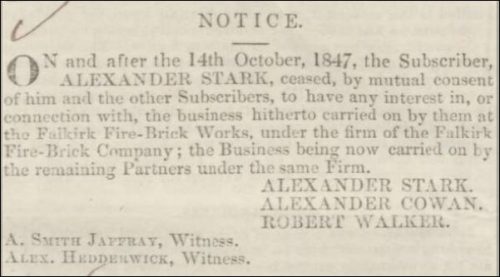 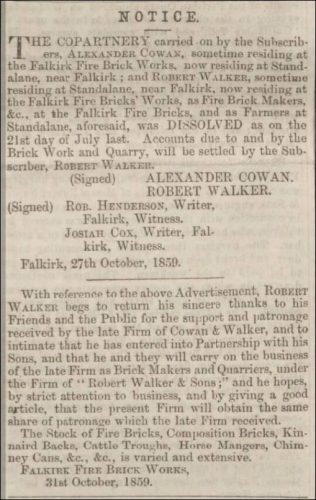 Below – 1860 – Falkirk Fire Brickworks (As identified by Falkirk Museum and Archives). 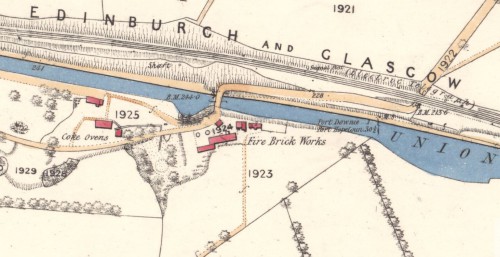 23/03/1875 – The Scotsman – Slander case between two united Presbyterian church elders – Pursuer in this action is Henry Walker, brickmaker and quarrier residing at the Falkirk Fire Brickworks, Falkirk and he sues John Wilson proprietor of the lands of South Bantaskine near Falkirk for the sum of £300 as damages for slander …  following the alleged theft of 1/2 a bag of cut grass Mr Walker was allegedly called a low black-guard (an infamous or dirty fellow) and a low scoundrel … (oooeeerrr)!

31/05/1879 – Falkirk Herald  – Reference to Robert Walker & Son, Fire Brickworks, Falkirk winning the first prize in baking oatcakes with meal and water only at the annual show!!