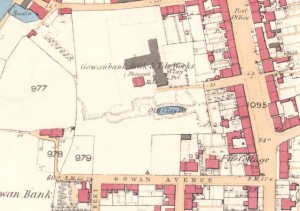 Established prior to 1860 –  Disused by 1860. The Works appear to have had a relationship with the Alexander Collins Brick and Tile Works. Indeed from the dates, they may have had the same owner. In 1860 the site contained 1 drying shed, 1 kiln, 1 clay pit, 1 old clay pit. Source – Falkirk Museum and Archives.

1842 – Kenneth W Sanderson states the works were started prior to 1842 and managed by Alexander Cairns. He was married to Margaret Donald of the Bonnymuir Brickworks Bonnybridge.

There will be exposed to sale by public roup, within Stevenson’s Salesrooms, George, Street, Edinburgh on Wednesday 17th day of March next, at 2 o’clock and in such lots as may be fixed on previous to the sale.

14/05/1852 – Edinburgh Gazette – Grahamstone, by Falkirk, May 7, 1852. The Business carried on at Gowan Bank Brick and Tile Works, near Falkirk, whereof the Subscribers were the sole Partners, has this day been dissolved by mutual consent. Alexander Cairns. Jas Potter.
With reference to the above, the Works will be carried on as formerly by the Subscriber, Jas Potter.

1858 – 1861 – ScotlandsPlaces – This name is applied to a brick & tile work situated off Grahamston, but which is now disused, the drying sheds and kilns are in a dilapidated state and are not likely to be again restored. Mr. James Potter, proprietor and occupier 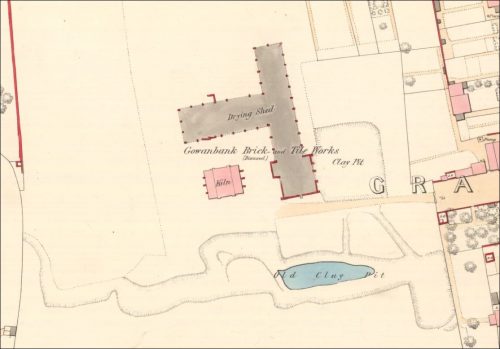 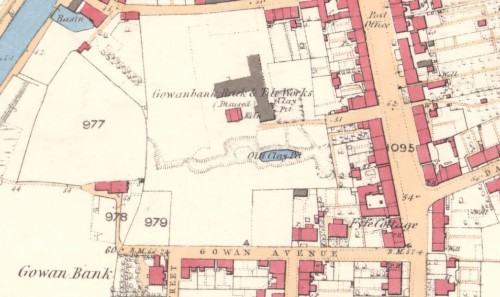 27/09/1878 – Edinburgh Gazette – A petition having been presented to the Sheriff of Lanarkshire, at the instance of James Potter & Company, Timber Merchants, Brick and Tile Makers,
Grahamston, Falkirk, for Sequestration of the Estates of Croall and MacIntyre, Property and Mortgage Brokers, 184 Buchanan Street, Glasgow, and James Croall and Lauchlan Maclntyre, both Property and Mortgage Brokers there, as Partners of said Firm, and as Individuals, Mr Sheriff-Substitute Spens granted Warrant for citing the said Croall & Maclntyre, and James Croall and Lauchlan Maclntyre, to appear in Court on an inductee of ten days from the date of citation, to show cause why Sequestration of their Estates should not be awarded; and directed Intimation of the Warrant, and of the Diet of Appearance on the said inductee, to be forthwith made in the Edinburgh Gazette.—Of all which Intimation is hereby given. Simpson, Kirk, and Donaldson, Writers, Glasgow, Agents. Glasgow, 26th September 1878.