19/03/1849 – Glasgow Herald – The remaining lots of the Estate of Craigton lying in the Parish of Govan and County of Lanark, part of the trust estate of the late Henry Ritchie, Esquire of Busbie possessed by Mr Graham … Lot 2. Lying to the south of the railway and to the north of an Avenue between it and the property of Henry Dunlop, Esq., containing about 14 imperial Acres … on Lot 2d, there is a drain tilework, and abundance of good clay … 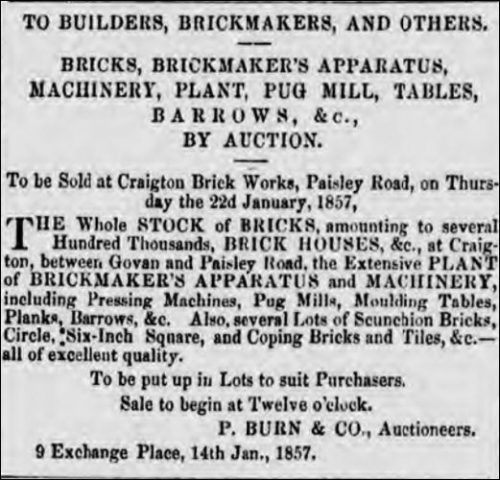 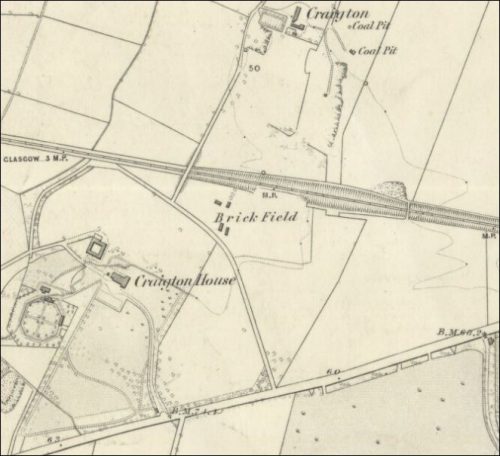 12/04/1864 – Glasgow Herald – On Sunday afternoon, about three o’clock, a boy named William Henry, twelve years of age residing in Dale Street, Tradeston was accidentally drowned in a clay pit at Craigton Brickworks, Paisley. It appears, undressed himself for the purpose of bathing, and while in the act of walking down the embankment he stumbled, rolled into the water and before assistance could be rendered he was drowned. The body was recovered in about ten minutes afterwards and conveyed home.

24/03/1870 – Glasgow Herald – The brickfield presently occupied by Messrs A & T Bow at Craigton, with stove, kiln, panmill, engine and boiler. The stock and plant can be had at valuation. Apply to Moore & Brown, CA, 28 St Vincent, Place, Glasgow.

26/03/1870 – Glasgow Evening Citizen – Scotch bankrupts – A. & T. Bow, Brickmakers and Builders, Craigton Brickworks, Renfrew, and Mrs Janet Thomson or Bow, brickmaker there, the only partner of said firm, as such and as an individual.

09/08/1870 – Edinburgh Gazette – I, Thomas Brown Junior, Accountant in Glasgow, Trustee on the sequestrated estate of A. & T. Bow, brickmakers and builders, Craigton Brickworks, Renfrew, and Mrs Janet Thomson or Bow, brickmaker and builder there, the only partner of said firm, as such partner, and as an individual, hereby intimate that a first and final dividend will be paid to those creditors whose claims have been admitted by the trustee, within the Chambers of Thomas Brown, Jr., & Davies, Accountants here, on the 24th day of September 1870. Thos Brown, Jnr. Trustee. Glasgow, 135; Buchanan Street.

1871 – John Gardner & Co. were ‘lightning conductor manufacturers and fixers, and repairers of chimney stalks and church spires’. The firm was founded before 1867 by John Gardner (c. 1846–1897). He also had a brickmaking and building company, which eventually became Gardner & Shaw, moving to Craigton Brickworks, Paisley Road West, around 1871. (Note – SBH – So where did they move from?). Gardner & Shaw erected new warehouses on the corner of Morrison Street and Paisley Road around 1876, probably part of the extensive Co-operative Wholesale Society complex there. In 1878, the brickfield began losing money, and the firm was declared bankrupt in 1881.  Rather than face his creditors, Gardner absconded to South Africa, abandoning his wife and five children in Glasgow. When his six-year-old daughter died in 1884, the family noted her father as ‘deceased’. In fact, it was not until 1897 that Gardner died in a London hospital, having finally returned from Johannesburg. 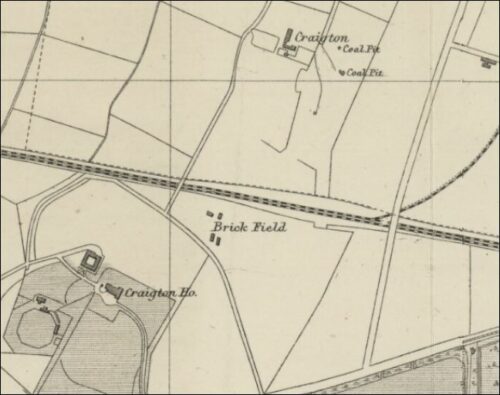 12/06/1888 – Glasgow Evening Citizen – About half-past six o’clock this morning the dead body of a man was found floating in a pond at Craigton Brickfield, near Govan. It was that of person between 36 and 40 years of age, stout make, 6 feet in height, and dressed in rough blue and red-checked tweed suit. In the pockets were found two pay-tickets in name of ‘C. Brennan’ from the Steel Company of Scotland. Blochairn Works, there were also small note-book with the name written inside “C. Brennan, 9 River Street. Blochairn. Glasgow.” A sealskin purse containing 14s 1/2d was likewise found in one the pockets. The body was conveyed to the Fairfield Police Station, Govan, where it lies for identification.

06/07/1888 – Glasgow Herald – Child murder at Craigton Brickworks.  Full write up regarding a trial of child murder. The child had been struck on the head with a brick and thrown down a well at Craigton Brickworks. Susan Winter or Winters, about 28 years old was indicted with murdering her illegitimate child Catherine Donaldson or Winters. She was subsequently found guilty of manslaughter after trial and sentenced to seven 7 years penal servitude.

14/05/1889 – Newcastle Evening Chronicle – Two women shot; suicide of the assailant. The usually quiet district of Craigton, a hamlet lying between the West end of Govan and Paisley Road, Glasgow, was yesterday afternoon thrown into a state of great excitement through a shooting affray which ended in the death of a man named Bradshaw, a woman named Heily being seriously wounded, and the wife of the former slightly injured. Yesterday forenoon William Bradshaw, fifty-one years of age, a coal dealer, residing at Craigton Brickfields, went to Govan, and his wife supposing he had gone out for a day’s drinking followed him in the afternoon. Between four and five o’clock the two set out for home, he being a little the worse of liquor, but quite able to walk. Getting within 400 yards of their house, Bradshaw, on passing Badhea Cottages, observed a woman named Mrs Heily, 30 years of age, wife of Patrick Heily, a red lead painter,  sitting at her door chatting with a Mrs Rodgers. He went forward and drew Mrs Heily aside, and placing her next to his own wife, asked, ” What have you to say now?” Mrs Heily answered, ” I have nothing more to say.” whereupon Bradshaw exclaimed. “By God, I’ll do for you this time,” and immediately he drew a five-chambered revolver from his pocket and fired at Mrs Heily, the ball entering her left groin. He fired again when his wife put up her hand, and the ball passed between her fingers, slightly injuring her hand, but it missed the woman aimed at. It is said a third shot was fired. All this was witnessed by three women, who afterwards rendered what they could to the injured women. The police at Fairfield and Govan were communicated with, and also Dr Allan. The latter was quickly on the spot and succeeded in extracting the bullet from the injured woman. She was afterwards taken to the Western Infirmary in the Govan by ambulance waggon. Meanwhile, Bradshaw had walked coolly away home, his house being about 400 yards from the Badhea Cottages. By this time a number of constables, along with Lieut. McFadyan, Detectives Angus and McDonald, had arrived and proceeded to Bradshaw’s house. Here, where that second act, equally tragic, took place, a large crowd had assembled. The police endeavoured to gain admittance, but Bradshaw threatened to fire at the first man who came near, Eventually, he became less excited, and Detective Angus went forward to the door and tried to persuade him to give himself up quietly. The door all this while was only about six inches ajar, Bradshaw standing behind, again and again presenting the revolver at those standing around. He said he would not move a step till they brought his wife, as he wanted “to do for’ her,” too. At last be handed out a gill bottle whisky to Detective Angus, remarking, “Give y chums a dram and I’ll be with you.” No sooner had the detective taken the bottle than a shot was heard behind the door, and when pushed open Bradshaw was lying dead, the bullet having entered between his eyes. On the table in the kitchen a note was found bearing these words, “Eliza, please give my pipe to Sam,” written on pass-book paper. The pipe referred to was a favourite meerschaum, and Sam is a young man in the employment of the deceased. There are some indications that the tragedy, or something akin to it, was premeditated. It is stated that about a year ago Bradshaw, who was an old soldier and pensioner, told two of the Govan police that they would have a shooting case some of those days. The neighbours say that Bradshaw was angry at Mrs Heily because she refused to speak to him in the morning. To all appearance, the revolver was not a new one, and when found at the side of the suicide had one cartridge remaining, the other four having been discharged. Deceased has been twice married and had large families, there being now seven, left in the house aged from 4 to 14 years.

04/03/1893 – Dundee Courier – New joint-stock company. Craigton Brickmaking Co. This company has been formed to purchase the business and take the lease of the clay in and under the lands of Craigton belonging to Messrs John Henderson and Son, brickmakers, Craigton, Paisley Road (West) Glasgow and to carry on the business of brick and tile makers, quarry masters &c. Capital £5000 in £1 shares. Registered office 173 St Vincent Street, Glasgow. 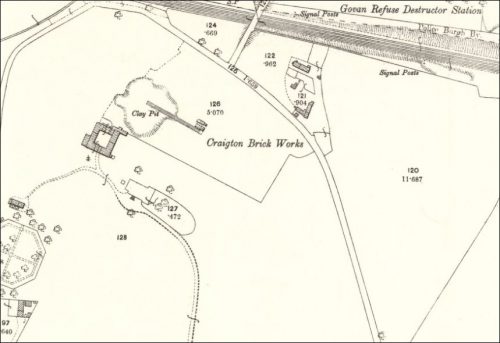 17/10/1899 – Edinburgh Gazette – Craigton Brickmaking Co Ltd in liquidation. Notice is hereby given that a general meeting of the members of the above-named Company will be held within the Office of The Craigton Brickmaking and Feuing Company Limited, Craigton Brick Works, Paisley Road, Govan, on Tuesday the 21st day of November 1899, at three o’clock afternoon, for the purpose of having an account laid before them showing the manner in which the winding-up has been conducted and the property of the Company disposed of, and of hearing any explanation
that may be given by the Liquidator. Nicol F Cameron, Liquidator. Glasgow, 16th October 1899

31/07/1903 – The Scotsman – New buildings in Glasgow. At a sitting of Glasgow Dean of Guild Court yesterday, the following linings were granted: The Craigton Brickmaking and Feuing Company (Limited), to form a street between Ell Road and Craigton Road …

1911 – The Brickworks are now labelled as Craigton Engineering Works on this map.

Pre 1856, the brickworks at Craigton commenced. In 1856 Walter Buchanan gives up his business of brick making. The stock bricks will be sold at Craigton Field, Paisley Road.

c. 1871 – Gardner and Shaw are manufacturing bricks at Craigton.

c.1881 – Gow and Stobo are manufacturing bricks at Craigton.

Pre 1911 – The Craigton Brickworks are believed to be disused.

It is always nice to find the full history of a brickworks as per above although I concede that they may well have been other operators of these works in addition to those listed above.

What is even more satisfying is to be able to associate all of these individuals or companies with their brick products.

The bricks below are detailed as follows.
1. Buchannan (Stamped ‘Patent’ to the rear.
2. R Johnston.
3. A & T Bow, Glasgow (This company had several brickworks in the Glasgow area but they always appear to have used this stamp format).
4. Patent, Gardner & Shaw, Craigton, Glasgow.
5. Patent, Gow & Stobo, Craigton.
6. Patent, J Henderson & Son, Craigton.
7. Craigton Brickmaking Co Ld, Paisley Road.
8. Craigton which was the stamp potentially being used by the Craigton Brickmaking and Feuing Company Limited up until closure.