30/11/1846 – Glasgow Herald – Brickfield at Glasgow. On the line of the Glasgow, Airdrie and Monkland Junction Railway to be let. An extensive field of very superior clay in the lands of Netherfield at the East end of Duke Street within the Toll Bar on the Carntyne Road, contiguous to the line of the Glasgow, Airdrie, and Monkland Junction Railway, will be let either in whole or in separate lots, for a term of years, with entry immediately. A plan of the ground, showing the lots into which the field will, if necessary, be divided, together with sections of the clay, a journal of the bores and the conditions of let, will be seen on application to Mr Macdonald, writer, Spreull’s Court, Glasgow by whom offers will be received for a few days. Glasgow, 27th Nov 1846.

07/12/1846 – Glasgow Herald – Brickfield at Glasgow to be let. A valuable seam of clay contained in a Park measuring about 8 acres, situated at the East end of Duke Street, on the southside of the Turnpike Road, extending some distance both east and west of the Carntyne Toll Bar and bounded on the south by the line of the Glasgow, Airdrie and Monkland Junctions Railway, will be let in one or in separate lots, with entry immediately. As ascertained by a series of bores, the average thickness of the seam of clay, of excellent quality, throughout the Park, is fully 13 feet, and one part of it is upwards of 18 feet thick. The surface is very light averaging scarcely two feet in depth. The position of the field extending along the Turn Pike Road on both sides of the Toll Bar is capable of affording ingress for the cartage of coal and sand free of toll dues, for the manufacture of bricks; and affording egress for conveying away the produce of the manufactory in all directions, free of the suburban toll dues, while the formation of the railway will soon afford additional means of conveyance. For further particulars apply to Mr Macdonald, writer, Spreuls Court, Trongate who will show the plan of the ground together with the journal of the bores, and the samples of Clay taken by the borer. Glasgow, 5th December 1846. 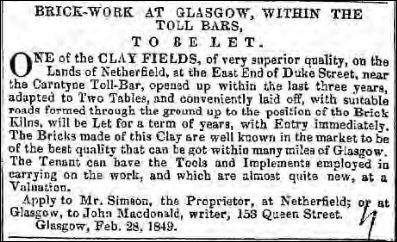 Below – 09/03/1849 – Glasgow Herald –  Brickmakers utensils for sale at the Westmost Brickfield at Netherfield, East End of Duke Street near Carntyne Toll Bar … (Note – SBH – This infers there was more than one brickfield in operation. So does that mean more than 1 operator?).

16/03/1850 – Glasgow Gazette – Notice. The subscriber on the 31st day of December 1845(?) ceased being a partner in a concern carried on by him and Mr Robert Cruickshanks, mason in Glasgow, under the firm of Johnston, Cruickshanks and Company, brickmakers in Glasgow. After which date the subscriber carried, and still carries, on as business as a brickmaker in his own name. Robert Johnston. Glasgow 12th March 1850 … (Note – SBH – This Robert Johnston may or may not be the same person that operated wither the Craigton or Netherfield Brickworks or indeed both).

Below – 22/12/1854 – Glasgow Herald – 300,000 bricks for sale at the Netherfield Brickfield belonging to the sequestrated estate of James B Barclay & Co, Slaters, Glasgow 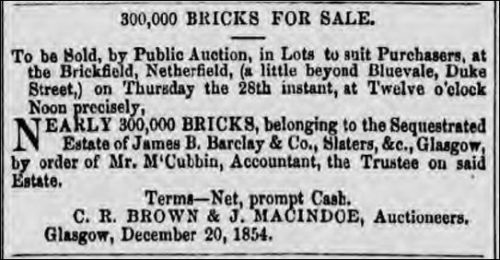 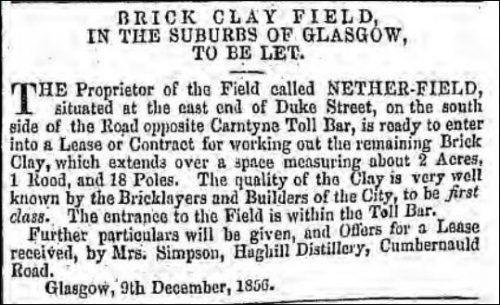 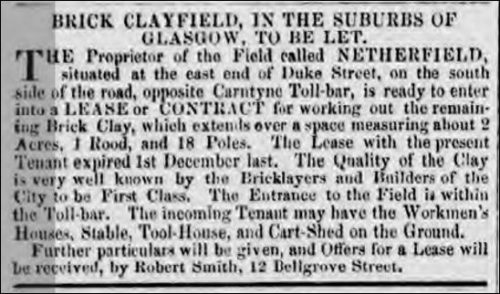 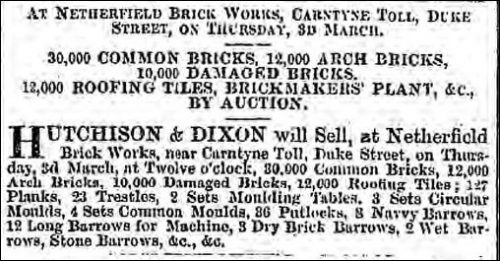