Kilmartin Glen – After the last Ice Age about 10,000 years ago, rising sea levels flooded Kilmartin Glen and covered it in impermeable marine clay.  –  In 1794, construction work on the Crinan Canal started. Once the canal was opened in 1801 this allowed for the import of coal from Glasgow reducing the local population’s reliance on peat cutting and enabled them to improve the land. Poltalloch Estate, owners of about 1200 ha of the bog, recognised that the clay base layer underneath the Moine Mhor was potentially good agricultural land. In 1795 they started reclaiming the bog by drainage and peat removal, and by 1801 they had enough reclaimed land to establish a new farm called “Experiment”, now Barsloisnoch. The expanding Estate needed food for the laird’s household and for the new village of Kilmartin, built to house Estate workers. The Estate set up a tileworks and used local clay to make bricks for buildings and pipes that were used to drain the bog. Parts of the bog were cut to fuel the tile works and the remains of the peat drying sheds can still be seen near the northern boundary of the Reserve. Our nature trail on the North Moss (near the former Tileworks Cottage) is appropriately named ‘Tileworks’ – as a very interesting link to the cultural heritage of the Moine Mhor. 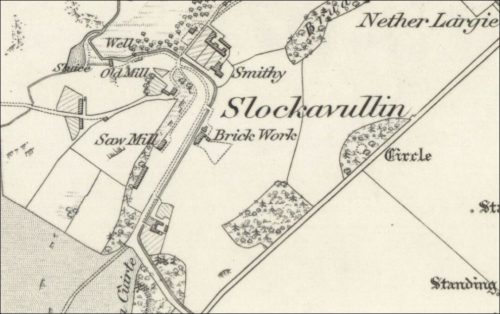 By 1898 – The brickworks site was gone and replaced by a gasworks.