Below – 21/09/1937 – New brickworks for Airdrie. One kiln being built and more to more depending on the demand for the bricks. 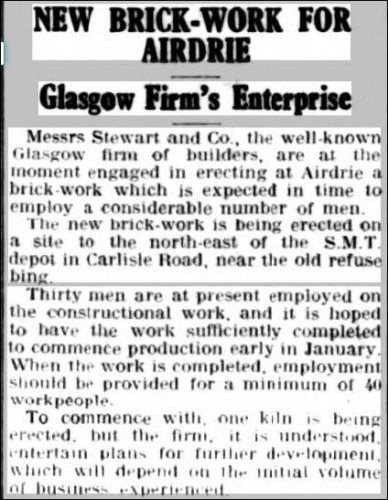 06/06/1942 -Airdrie and Coatbridge Advertiser – Wheatholm Park boundary wall. A Sub-Committee reported to a meeting of Airdrie Parks Committee that they had further considered the complaints by householders, and, with the Burgh Surveyor and the Parks Superintendent, had made an inspection of the wall between properties of the complainers and Wheatholm Public Park, some of the bricks in which were found in a faulty condition. The Burgh Surveyor had accordingly taken up the matter with Messrs Robert Paterson & Sons, Ltd., the contractors, and he hoped to have an early meeting with representatives of Airdrie Brick Company who supplied the bricks. The matter was continued

24/12/1950 – Sunday Post – The story of how an unemployed labourer got a child of eight to obtain money by false pretences was told by the Procurator Fiscal at Airdrie yesterday. Thomson (30), 4 Hillview, Greengairs, pleaded guilty that on Friday, at Airdrie Brickworks, Dunrobin Road he pretended that a note written by Benjamin Lawson authorised him to uplift Lawson’s wages of £5 18s 7d. He had written the note himself. The Fiscal explained that Thomson sent an eight-year-old boy into the brickworks with a note which said, ” Please, will you  give the boy my wages, as I won’t be out to-night?” The boy received the wages. A little later Lawson arrived for duty on the nightshift, and the truth came to light. In the meantime, Thomson had taken the boy to the police station, where the boy reported that a woman had robbed him of the pay packet. When the works manager phoned the police he gave an entirely different picture. Thomson was arrested shortly afterwards. The pay packet was found in his possession. He was fined £10, or sixty days.

11/12/1954 – Airdrie and Coatbridge Advertiser – George Watterson, brickworks foreman, 48 Nicol Street, admitted having on 8th October in Carlisle Road, Airdrie, driven while he was under a two years disqualification, dating from 14th October 1933, and without being covered for third party insurance. He admitted a third charge of stealing 42 lbs. coal dross from Airdrie Brickwork, Petersburn Road.

Aug 1961 – Clay Worker Magazine?  – Airdrie Brick Co Ltd, Dunrobin Road closed leaving 50 men unemployed. It had been in production since 1934 but closed after the July holiday due to lack of orders.