20/04/1875 – Dundee Courier – Cowardly conduct of colliers. At Motherwell on Sunday evening a scene took place on the pond of water in connection with Watsonville Colliery and Brickworks, Motherwell, which says little for the courage and presence of mind of a crowd of colliers. A little boy, aged seven, named Peter Milligan, residing in Watsonville, fell into the pond, which is from 5 to 6 feet deep. The alarm was immediately given, and a large crowd of miners was soon on the spot. Several stripped off their clothing but none had the courage or forecast to render assistance to the drowning boy. Latterly the father arrived, and he, like the rest, did not venture to attempt a rescue, although the poor fellow had been 20 minutes in the water and disappeared several times Fortunately, a railwayman, named Alex. Baxter residing in Merry Street, appeared on the scene and immediately jumped in and brought the boy to the surface, but apparently lifeless. Stimulants were, however, used by Dr Wilson and life restored and hopes are now entertained of the little fellow’s recovery. The conduct of the crowd of men who looked on is severely commented on. (Note – SBH – The North British Daily Mail – 20/04/1875 – The same story is covered and refers to the brickworks as the Ville Brickworks).

07/08/1886 – Motherwell Times – Police Court, before Provost Thomson. Talk about sleight-of-hand tricks, William Carrol, brickwork labourer, Watsonville, is an apt student at that light-fingered work. He can walk around a man like a cooper around a barrel and slip into his pocket as softly as an owl into an old Church tower. Last Saturday he was standing at the bar at the Royal Hotel and seeing Francis Muldoon putting a purse containing about 4s into his pocket, he, in a  scientific manner, managed to transfer it into his own and then left the bar …

23/06/1894 – Motherwell Times – Charles McNeil, ironworker, Windmillhill Street, was found guilty of quarrelling and fighting and committing a breach the peace on Saturday at Watsonville Brickwork and a penalty of 15s or ten days’ imprisonment was imposed.

03/11/1894 – Motherwell Times – Alex. McLaren, miner, Watsonville and James Gallacher, miner, Watson Street, were charged with malicious mischief by breaking down a portion of the brick wall of No. 3 kiln at the brickworks near Watsonville. Both pleaded not guilty. In the course of the evidence, it was stated that during the past two or three months damage to the extent of about £30 had been done at the brickwork. The charge was found proven, and a fine of 10s or five days was imposed on each. (Note – SBH – The Hamilton Herald 02/11/1894 also details the accused as being ‘miners’ but also describes them as being ‘two young lads’ so perhaps they were minors and not miners or indeed considering the year they could be both!).

Below – 1896 – The location of Watsonville Brickworks although they are not marked. (Note – SBH – Does this mean the brickworks are gone by this date?). 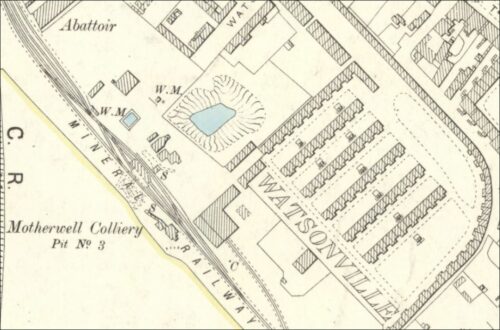 Below – 1897 – The location of Watsonville Brickworks although they are not marked. 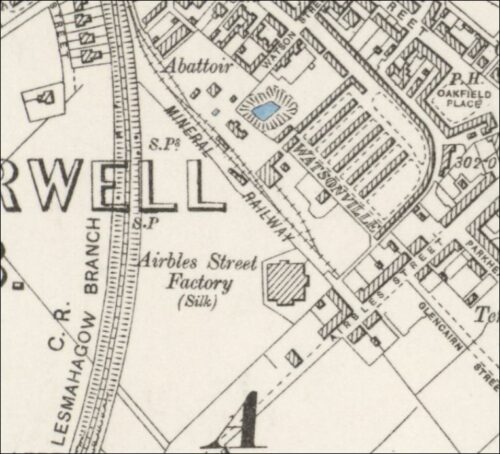