21/09/1849 – Glasgow Herald – Kittymuir Farm, Stonehouse for sale … The roads, in all directions, are good and there is a large tilework in the village of Stonehouse, within half a mile of it … 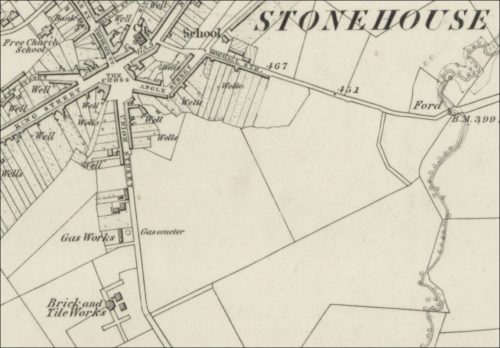 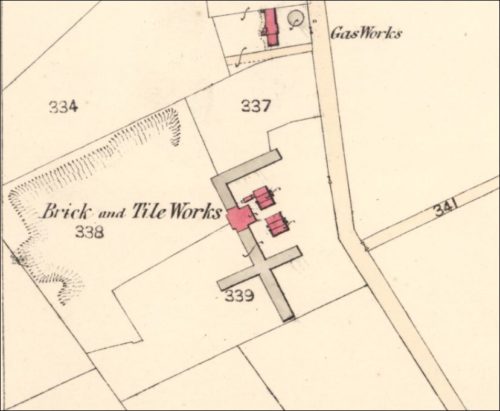 1858 – 1861 – James Baird Lessee. Long wooden open-sided sheds and some kilns used for drying bricks and tiles made here. Tiles are principally made but bricks are also done when required. Wrought by James Baird. The property of J.S Lockart Esq.

16/03/1867 – Hamilton Advertiser – Stonehouse Brick and Tile Works for let., for such term of years as may be agreed upon. Entry immediately. The works are in superior condition with a first class connection. There is a steam engine, two large tile kilns in good order and shed accommodation for a very large output. Clay of a superior quality can be wrought out of the solid face. From the proximity of the Stonehouse Branch Railway the business can be greatly extended. The works and plant will be given over at a valuation … (Still to let on 14/10/1867).

05/08/1871 – Hamilton Advertiser – Novel wages case – The pursuer, James Summers raised an action in the small debt court against the defenders W.& W. Wallace, concluding for £3 being wages for twenty working days, due to pursuer in respect he was engaged by John Campbell to work at and in the Stonehouse Tilework for said period and did so work. The pursuer alleged that Campbell acted as manager for the defenders or otherwise that the defenders at the end of the pursuers engagement took possession and sold, or otherwise intromitted with the bricks and tiles made by the pursuer, and reaped the benefit of the pursuer services. Mr Wm. Brown, for defenders, denied that Campbell acted as manager for the defenders, and stated that the defenders had sold the tilework as a going business to Campbell, who was to pay the price at his entry; but that although he entered into possession he had failed to pay the price. Whereupon the defenders had ejected him from the premises, under a warrant from the Sheriff, and had again taken possession the works, with the tiles and bricks made during the time Campbell had possession. James Gebbie, for the pursuer, admitted, from the documents produced, that Campbell had not acted as manager for the defenders, but maintained that as the defenders reaped the benefit of the pursuer’s work, they were responsible to him for his wages. The Sheriff-Substitute having taken the cause to avizandum, found that defenders were in the circumstances liable to the pursuer for his wages, and decerned for £2 2s. The pursuer withdrawing his claim for 18s being for the six days warning he was entitled to receive at the termination of his engagement. 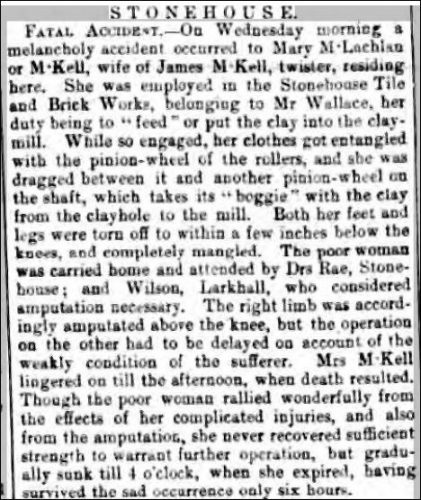 12/09/1878 – Peter McSkimming was born, probably in 1847 or 1848, in Auchenheath, Lanarkshire, Scotland; he was the son of Mary McNish and her husband, Peter McSkimming, a brick- and tile-maker and pipe manufacturer. His early life was spent in various towns in Lanarkshire and Ayrshire. He started work at the age of nine in a tileworks at Mauchline, moved to Chapelton by the time he was 11 or 12, and appears to have continued to move around after marrying Catherine Pelling at Lesmahagow, Lanarkshire, on 22 October 1869. McSkimming was working at the tileworks near Stonehouse when he and Catherine decided to emigrate to New Zealand with their family of three daughters and a son. They left Greenock on the clipper Canterbury on 12 September 1878 and arrived at Port Chalmers on 10 December. Two more daughters were born in New Zealand.

03/05/1879 – Glasgow Herald – Scottish Bankrupts – William Wallace, brick and tile manufacturer, in Stonehouse to be examined in the Sheriff Courthouse, Hamilton on 12th May at two o’clock. (William Wallace was the sole partner of W & W Wallace – source) 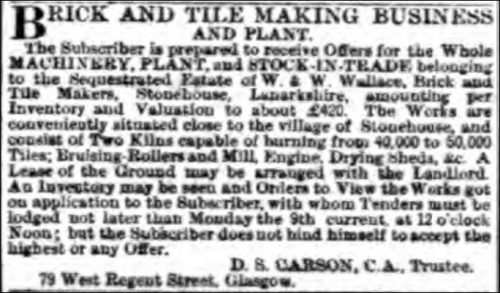 02/09/1879 – Edinburgh Gazette – In the sequestration of William Wallace, Brick and Tile Manufacturer in Stonehouse, carrying on business under the Firm of W. & W. Wallace, Brick and Tile Manufacturers there, of which he is the sole Partner. David Simpson Carson, Chartered Accountant, in Glasgow, Trustee, hereby gives notice that a first Dividend will be paid, within the Chambers of Carson & Mackenzie, Accountants, 79 West Regent Street, Glasgow, upon the 18th day of October 1879. D. S. Carson, C. A., Trustee. Glasgow, 1st September 1879. 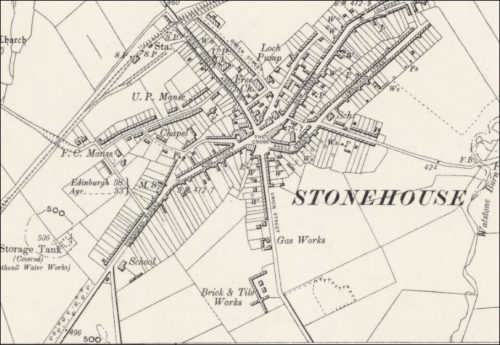 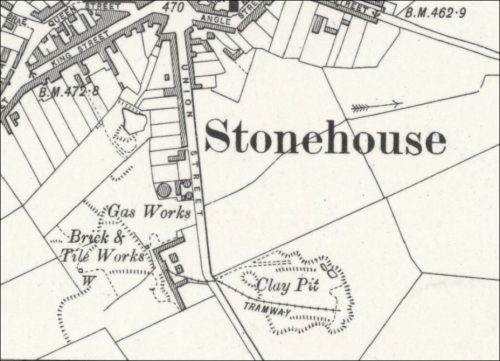 Below – The following information and photographs have been kindly supplied by John Young.

In 1883, Major General Lockhart C.B. of Cambusnethan House was the landowner of the aforementioned Tileworks grounds where Stonehouse Curling Club predominantly played during the late nineteenth and early twentieth century. The Brick and Tileworks themselves were owned in part and managed by, Mr John Borland (R & J Borland, Brick and Tile Manufacturers), a man of stout character, and respected for his involvement in parish affairs. Due to restrictive building clauses in the sale of land, discouraging factory erection by the Sinclair-Lockharts or their predecessors, Stonehouse was not as affected by the progress of the Industrial Revolution of the nineteenth century as much as neighbouring communities. However, one exception was that of the Tileworks kilns in Union Street which bellowed smoke in the production of roof tiles and field drain pipes. The clay pit adjacent to the factory carried a light bogey track with the basic raw materials across Union Street where field drains and tiles were baked, then matured on open lattice shelving in proximity to the kilns. When the factory was at its height, seven people were employed producing field drains and tiles which were considered to be among the best quality in the district. The business, however, did not last a second generation and the Tileworks fell into disrepair in the early twentieth century.

Another able exponent of the game was that of Johnny Ritchie, who despite being only fourteen years of age, won many a money match against more seniors competitors. It would appear the law did not prohibit such betting and Johnny took advantage of this in defeating a fellow Larkhall opponent at varying distances. In October 1920 Johnny Ritchie was described as “the boy champion” in competing with R. McBride (Larkhall) when despite his youthful years was victorious by 61 shots to 38. In 1924 Johnny contested a series of at least eight matches with Walter Anderson of Larkhall for various stakes of up to £100. The contests took place at a number of quoiting greens including, New Stevenson, Parkhead and the Tileworks at a distance of 15 yards and 21 yards in games of 61 shots. In 1924, the Club reporter stated that the ‘boy champion’ Johnny Ritchie defeated Walter Anderson in the majority of these contests by the narrowest of margins.

Extract 3 (Trades)
The tileworks was also a thriving business at this time. Managed around the turn of the 20th century by John Borland the tileworks was situated at the bottom of Union Street. The earliest mention of the Stonehouse Brick and Tile Works, South Lanarkshire relates to an article in the Perry’s Bankrupt Gazette (24.03.1849) stating Kenneth and Stevenson of Tarbrax and Stonehouse tile and brick makers was in debt. Around 1858 the Brick and Tileworks were leased by James Baird Lesse from J.S Lockart Esq. where long wooden open-sided sheds and kilns were used for drying bricks and tiles made here. In 1867, the brick and tileworks were once again up for letting and was in the ownership of William Wallace in 1871. A fatal accident was recorded at the tileworks in this year involving Mary (McLachlan) McKell. Only a few years later (Glasgow Herald, 6.6.1879) the tileworks were up for sale once more. Valued at £460, the works consisted of two kilns capable of burning between 40,000 and 50,000 tiles, bruising rollers, with mill engine and drying sheds etc.
Directly across from the gasworks lay one of many clay holes, later filled in with refuse. There was also a clay hole for making the tiles on the site of the football pitch where Stonehouse Violet formerly played. A second brick and tileworks were situated at Greenburn in the 1850s owned by Dr Mitchell, a popular employer who would annually finance excursions for his staff to places such as Rothesay.

Extract 4 (Hamilton Advertiser) September 1865 – Accident – “On Wednesday last, a man named Gavin Muirhead, residing at Glenburn, met with an accident which deprived him of three toes on his left foot. He was employed as a labourer at the Greenburn Tileworks and had been wheeling clay with a hand barrow into the mill. On emptying the barrow into the mill box, he was in the act of trampling the clay down, with his foot, when one of the knives came into contact with it and the result was as above stated. No blame was attached to anyone”. Note Greenburn is the name of another Tileworks located near Lonsdale farm.

March 1878
A report on the current state of the brick and tile industry indicates that business is encouraging and a great number of “hills” have been cleared out.  At the turn of the century, John Borland owned the Tileworks in Union Street, which was said at the time to give off the only factory smoke in the village. A light bogey track carried the necessary materials across Union Street, where field drains and tiles were baked, then matured on open lattice shelving, built in proximity to the kilns. At its most productive seven men were employed. Despite the reputation of the quality of the product produced, the business did not survive another generation and fell into disrepair. Other tileworks were present at Dykehead, Glenburn and near Low Kittymuir.
Below – The photographs are c. 1900 and depict the Stonehouse Brick and Tile Works and curlers using a flooded frozen clay pit as a rink. 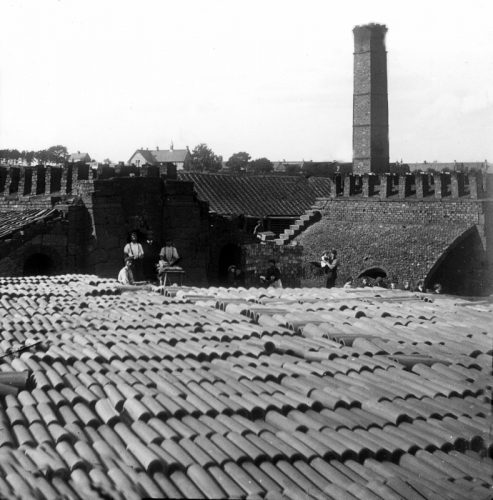 Below – Manager John Borland standing to the right of the kiln with hands tucked into his waistcoat. 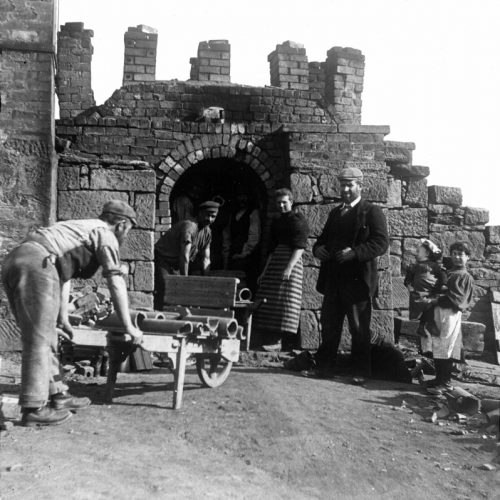 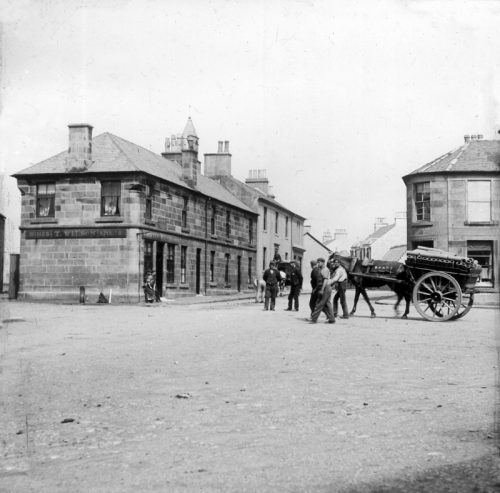 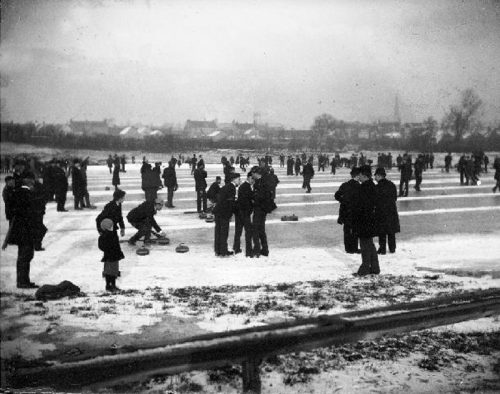 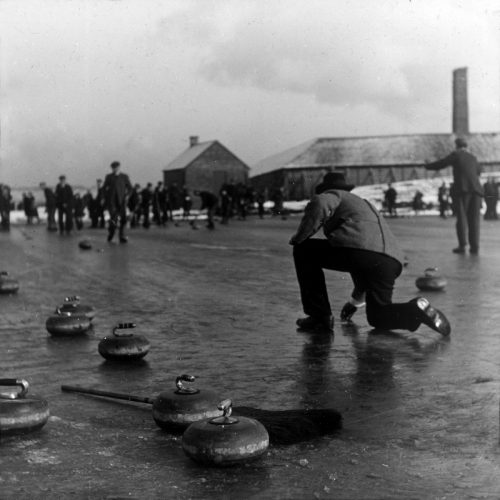