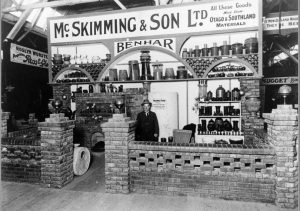 Peter McSkimming was born, probably in 1847 or 1848, in Auchenheath, Lanarkshire, Scotland; he was the son of Mary McNish and her husband, Peter McSkimming, a brick- and tile-maker and pipe manufacturer. His early life was spent in various towns in Lanarkshire and Ayrshire. He started work at the age of nine in a tileworks at Mauchline, moved to Chapelton by the time he was 11 or 12, and appears to have continued to move around after marrying Catherine Pelling at Lesmahagow, Lanarkshire, on 22 October 1869. McSkimming was working at the tileworks near Stonehouse when he and Catherine decided to emigrate to New Zealand with their family of three daughters and a son. They left Greenock on the clipper Canterbury on 12 September 1878 and arrived at Port Chalmers on 10 December. Two more daughters were born in New Zealand.

McSkimming spent three years at Lawrence, where he and his wife began a grocery business, and a year on the Waitahuna goldfields, before leaving in 1882 for Kaitangata, and then Stirling, in South Otago. He and his son, Peter McNish McSkimming, worked for John Nelson at his recently established pipe-works at Benhar, then produced clay pipes on a contract basis. They subsequently leased the Benhar pipe factory from John Nelson with the £150–£200 they had between them. Assisted by a loan from a friend, they eventually bought out the business completely in 1892 or 1893 and established it as P. McSkimming and Son. The factory included coal-pits, pipe-works and brickworks, and eventually a clay-pit.

By 1903 the firm was sufficiently well established to be able to supply, jointly with the firm of J. H. Lambert of Dunedin, stoneware pipes for the Dunedin sewerage scheme. In 1917–18 the McSkimming business formally combined with Lambert’s firm and Thomas Todd and Sons at Waikiwi, Invercargill, through a transfer of shareholdings in the companies between 14 members of the three families. One employee of the firm, between 1923 and 1930, was Garfield Todd, later to become prime minister of Southern Rhodesia.

Peter McSkimming senior travelled to Britain in 1905, and again in 1909 with members of his family on business and pleasure trips which lasted several months. The information gathered and the contacts made on these and later trips ensured that the company kept abreast of all overseas developments. Peter McNish McSkimming and Parker McKinlay (who had married the family’s eldest daughter, Helen), were to play a major role in establishing the firm as New Zealand’s leading supplier of earthenware pipes, sanitary ware and glazed bricks.

The McSkimmings established a workers’ housing scheme to provide accommodation for their employees in Benhar. The elder McSkimming took a paternal interest in the village and the welfare of its inhabitants. He and his wife lived in Benhar, in a house named after her hometown, Lesmahagow. Catherine McSkimming died on 13 March 1914. On 3 November 1915 McSkimming married Mary Davidson Barty at Balclutha; there were no children of this marriage. Peter died at Benhar on 3 November 1923; Mary died on 1 February 1957.

Photographs taken late in life, show Peter McSkimming as a handsome man with a square face and a white, short-cropped beard. The eyes and smile suggest a sharp, genial and intelligent man, an impression confirmed by the diary he kept on his visit to Britain in 1909. Despite his early start to working life, he was literate, articulate and reflective. He was also a very hard worker, as was his son, and the McSkimmings expected their employees to be of a similar mould. His fitness into old age is illustrated by an incident recorded in the travel diary: a bicycle trip of 47 miles, including an 800-foot rise, was completed in eight hours. At the end of the journey, McSkimming still felt quite fresh; he was then aged 61.

Peter McSkimming acted as a Justice of the Peace and was noted as a prominent member of his local community. Described as a ‘stout Liberal’, he was particularly active in the prohibition movement and was a strong and generous supporter of the Presbyterian church, of which he was an elder. While visiting Britain he habitually noted the churches visited on Sundays, describing also the subject of the sermon of the day and summarising its contents and his own views on it: his religious feelings were deeply and sincerely held, but he was tactful in disagreement. He was remembered for his ‘kindly and genial disposition’, and for his practical contribution to a highly specialised branch of manufacturing.  Source

1884  – Brick, tile and pottery maker McSkimming Industries sets up associated companies and plants in Otago. The company was sold to a Wellington investment company in 1976 and on to Ceramco Ltd in 1980. 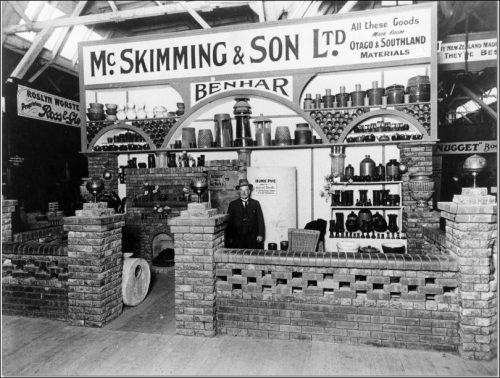 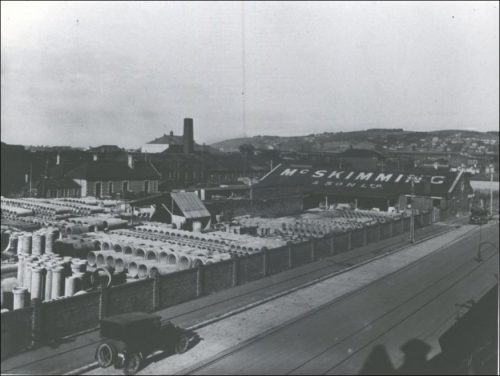 McSkimming, Peter – Peter McSkimming and his family immigrated to New Zealand from Glasgow in 1878. After spending four years gold-panning in Central Otago the McSkimmings settled in Stirling where Peter and his eldest son, also called Peter, went to work for John Nelson who ran a pottery and brick factory at nearby Benhar. After working as pipe makers for about ten years the McSkimmings leased and later purchased the business from Nelson in the early 1890s. The erection of the Hoffman kiln was probably one of the first projects undertaken at Benhar after the factory had changed hands and it is possible that Peter McSkimming senior was at least in part responsible for its design. 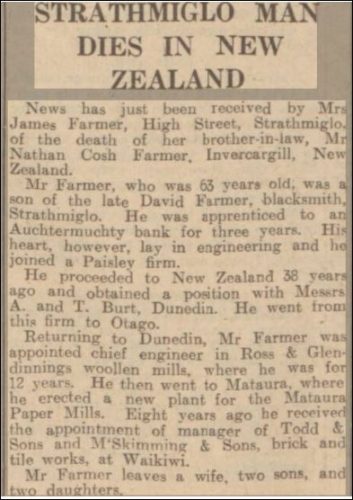 TIMELINE OF A KILN