(Note – SBH – From the details below it is possible both Greenburn and Glenburn were one of the same). 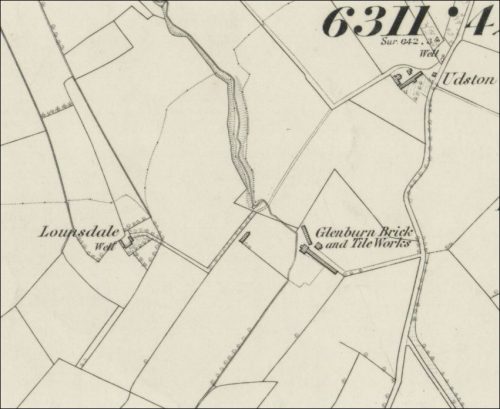 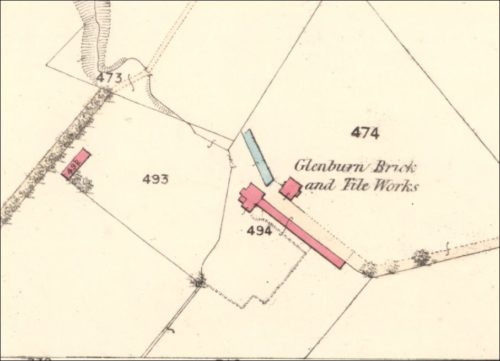 1858 – 1861 – ScotlandsPlaces – Glenburn Brick and Tile Works. Robert Borland, proprietor. Long wooden sheds for making building bricks and tile for draining and roofing houses. Tiles are principally made, but “brick and tile” is the proper term. It is the property of Dr. Mitchell, by whom it is wrought.

Below – The following information on Greenburn Tileworks ( Glenburn?) has been kindly supplied by John Young.

Extract 3 (Trades)
The tileworks was also a thriving business at this time. Managed around the turn of the 20th century by John Borland the tileworks was situated at the bottom of Union Street. The earliest mention of the Stonehouse Brick and Tile Works, South Lanarkshire relates to an article in the Perry’s Bankrupt Gazette (24.03.1849) stating Kenneth and Stevenson of Tarbrax and Stonehouse tile and brick makers was in debt. Around 1858 the brick and tileworks were leased by James Baird Lesse from J.S Lockart Esq. where long wooden open-sided sheds and kilns were used for drying bricks and tiles made here. In 1867, the brick and tileworks were once again up for letting and was in the ownership of William Wallace in 1871. A fatal accident was recorded at the tileworks in this year involving Mary (McLachlan) McKell. Only a few years later (Glasgow Herald, 6.6.1879) the tileworks were up for sale once more. Valued at £460, the works consisted of two kilns capable of burning between 40,000 and 50,000 tiles, bruising rollers, with mill engine and drying sheds etc.

Directly across from the gasworks lay one of many clay holes, later filled in with refuse. There was also a clay hole for making the tiles on the site of the football pitch where Stonehouse Violet formerly played. A second brick and tileworks were situated at Greenburn in the 1850s owned by Dr Mitchell, a popular employer who would annually finance excursions for his staff to places such as Rothesay.

Extract 4 (Hamilton Advertiser) September 1865 – Accident – “On Wednesday last, a man named Gavin Muirhead, residing at Glenburn, met with an accident which deprived him of three toes on his left foot. He was employed as a labourer at the Greenburn Tileworks and had been wheeling clay with a hand barrow into the mill. On emptying the barrow into the mill box, he was in the act of trampling the clay down, with his foot, when one of the knives came into contact with it and the result was as above stated. No blame was attached to anyone”. Note Greenburn (Glenburn?) is the name of another Tileworks located near Lonsdale farm.