02/03/1857 – Glasgow Herald – Wanted by the 1st of March, an experienced brick and tile burner to whom liberal encouragement will be given. Apply to William Brown, Tile and Pottery Works by Auchterarder. 30/01/1857.

23/07/1857 – Serious accident – a young lad of the name of Reid, son to Captain Hunter’s coachman, was employed at the Strathallan Brick and Tile Works, on Saturday last, got all the fingers of both hands taken off by an engine. He was instantly sent to the Perth Infirmary. It was thought that both hands would require to be amputated, which will put the individual in a most helpless condition for the remainder of his life.

1859 – 1862 – ScotlandsPlaces – Strathallan Brick, Tile and Pottery Work. These works are situated about half a mile south from the U. P. [United Presbyterian] Church. The works are divided into two separate divisions – one for the manufacture of pots and vases, &c.; the other for bricks and earthenware pipes for drainage. Property of Viscount Strathallan, Rented by Mr Brown. 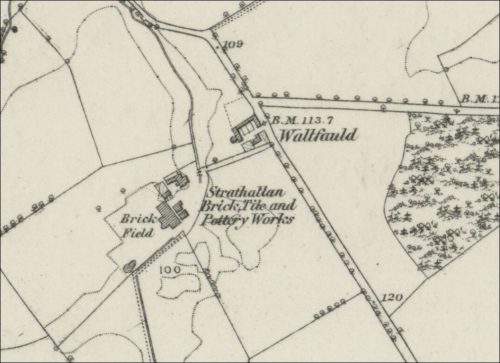 18/07/1867 – Perthshire advertiser – Arable farms and tileworks on the Estate of Strathallan to be let for 15 years … The Strathallan Tileworks, houses and grounds and along therewith the adjoining farm of Calfward and Pendicle … The tileworks are within a convenient distance of the Auchterarder and Tullibardine Stations. The whole are close to good public roads leading to the Stations and neighbouring market towns of Auchterarder and Crieff. Where steadings are deficient they will be repaired and made otherwise suitable. The clay of the tile works is well known for its superior quality and adaptability to every article in the line from best building bricks, roofing tiles and drainage and sewage pipes up to the finest designs for house, garden and other ornamental purposes. Mr Hume or Mr Thomson at Strathallan Castle will show sketch plans and general conditions and give orders for pointing out the respective possessions … Note present tenants are not offerers.

Below – 1899 – Strathallan Brick and Tile Works are marked as disused. (Note – SBH – The 1912 entry suggests the works may have been resurrected or did they move to a site nearby?). 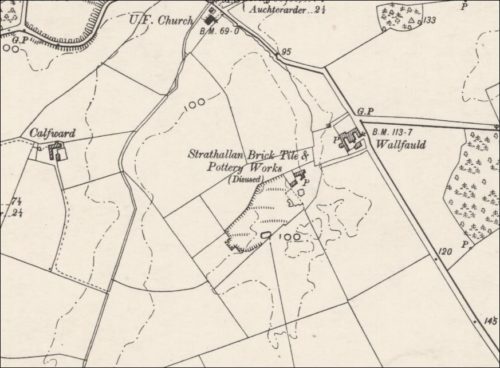 12/11/1946 – Dundee Courier – Provost and Laird made test bricks – One summer day nearly 50 years ago Mr David Johnstone closed down his brickworks at Wallfauld, Auchterarder. Agriculture was going through a bad period, there wasn’t the same demand for the smooth red draining tile and pipes that were the main product of his family business. It was before the days of the big-scale road transport, and near Kinkell Bridge one was far from the railway and its possibilities. The years passed. Grass and weeds overgrew the old brickworks. Another of Perthshire’s rural industries was dead.

WEALTH IN THE COUNTY.
One summer day in 1944 a man whose hobby was geology, and who was Perthshire’s convener, studied a report from the geological survey of Great Britain. Provost G. T. McGlashan, Auchterarder, carefully traced his country’s potential sources of wealth, not measured in money but in terms of providing work in the rural areas-a living for country folk in their own countryside. He was all out, like the new Perthshire Development Council which had been formed at his prompting, to arrest the drift from the country to the towns. He weighed up the revealing chart of the fuller’s earth at Dunning; the slate at Aberfoyle; the little mineral deposits, tin, and so on, freely scattered over North Perthshire, but in such small quantities as to be practically unworkable.
CHECK ON CLAY.
Then on the doorstep of his own burgh – clay. Clay means bricks, bricks mean houses. The valuable clay deposits were at Wallfauld, on the estate of Sir James Denby Roberts, Bart., of Strathallan Castle. The provost phoned Sir James. The response from a laird who has created a model estate was immediate and enthusiastic. Much had to be done before their hopes materialised. Was the clay suitable for modern brick making, and would it hold plaster? What about its absorption of water?  Was it, like so many other rich clay deposits, so broken up by small limestone pockets (from prehistoric seashells) as to be hopeless for the bricklayers? How much was there? An Ayrshire firm settled the last question. They put down bores over a large area. In the pouring rain, the Provost and Sir James watched anxiously. Up came the long worms of clear, pure clay, free from chalk. The verdict:- the field contained sufficient clay for an output of three million bricks a year for 40 years.
BRICKMAKERS.
The Provost and Sir James had still to “prove” the clay. They did it by making the first brick themselves. Clay was dug on a dark November afternoon. Sir James’s estate staff had made long wooden trays in the garage at Strathallan. Their wellingtons muddy and their hands cold, the Provost and the Laird puddled the clay themselves, packed it into the trays.  The bricks were shaped. They still had to be fired. The Provost knew a firm who would do that.  Back came the samples. For a long time, a brick hung suspended in a pail of water in the Provost’s little garage at Summerbank, Auchterarder. He made little jottings as it soaked. The brick was a “brick.”  A Yorkshire firm next appeared on the scene. The Provost arranged for a waggon load of the clay to be sent to their premises for processing. Once again Sir James was in on the spadework. He and his men loaded a waggon with the clay.  Back came the brick and a report. As fine a sample as the firm had handled. A brick and drainpipe, and a sectional building block were produced by the Provost at the recent meeting in Auchterarder when he gave news of the new industry.
HELD UP BY CONTROLS.
Much had happened in the interval. Eighteen months passed. At times the Provost and Sir James lost hope. Delay followed delay. Government departments shuttled schemes, while the country waited for houses. But a month ago one department took the matter up in business-like fashion. The Perthshire men’s persistency was rewarded. As soon as the building can be erected and machinery installed, a large modern works will start pouring out the bricks. Road transport will be the key to providing a large area north of the Forth with the finished products. From works to building sites will be the object.  But it has taken a year and ten months to cut through the maze of controls and formalities which are part of the so-called planning. Bricks might have been coming out now but for that.