Below – 06/05/1847 – Advert for James McAlpine, brick and tile and pottery maker having secured another field of clay at the foot of the Craigs of Stirling. 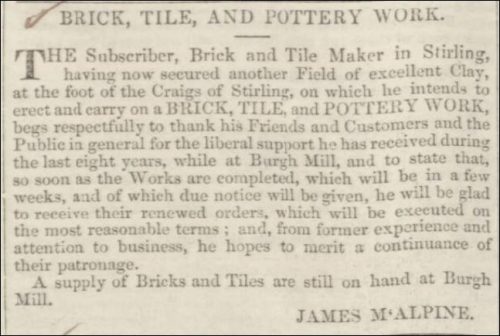 11/02/1856 – Glasgow Herald – Storms in Stirling  – In the town, a great many houses have been unroofed and Mr McAlpine’s Brickwork, besides being unroofed is almost laid in ruins.

01/01/1857 – Stirling Observer – High Constables – The Stirling Constabulary Force met in the courthouse Friday last when they proceeded to the election of office-bearers … Mr James McAlpine, brick and tile maker, treasurer.

Below – 1858 – Burghmuir or Craigs Brick and Tile Works, Stirling. 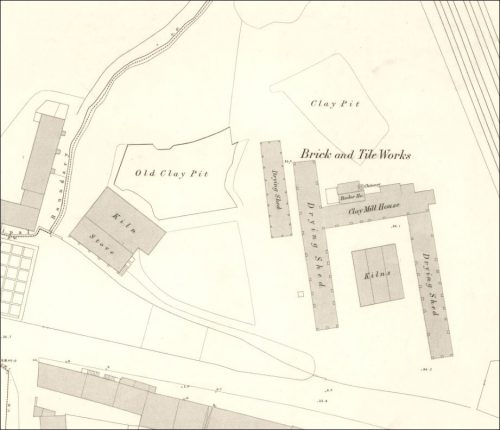 Below – 1863 – Burghmuir or Craigs Brick and Tile Works, Stirling. The works appear disused by 1899. 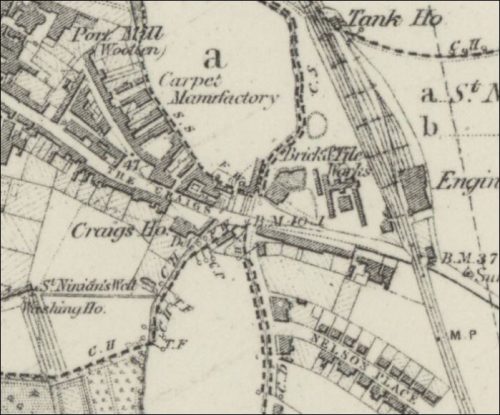 25/10/1865 – Stirling Observer – Reference to Mr James McAlpine, brick and tile maker being a Councillor in Stirling.

20/02/1869 – Alloa Advertiser – Stirling – Sale of steamboat shares – On Tuesday in the Golden Lion Hotel, there were exposed for sale, four shares of the Stirling, Alloa and Kincardine Steamboat Company, belonging to the late Mr T Ferguson, grocer, at the upset price of £10 per share. After a brisk competition, they were knocked down to Mr McAlpine, brick and tile maker, Stirling at £12 5s per share. The other properties advertised were not sold. 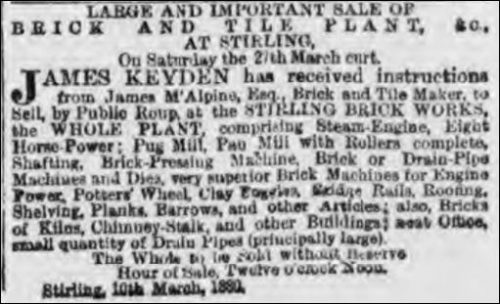 1887 – A McGrouther – Brickmaker, Janefield, Newhouse, St Ninian’s, Stirling – page 54. ( Note  – SBH – I am uncertain if this entry refersNewhouse to the brickworks detailed on this page but Newhouse, St Ninian is fairly close to the Burgh Mill Brick and Tile Works). (Note – SBH – Mr McGrouther may be a brickmaker working at a brickworks rather than the owner. He could also be Alexander McGrouther who owned the Lampits Tileworks at Carnwath in 1866))

01/01/1898 – Edinburgh Evening News – Death of a Stirling ex – Baillie – This morning ex – Baillie McAlpine died at his residence in Stirling aged 89. Deceased was a brick manufacturer for many years and was a town councillor for 20 years. He retired several years ago. He is survived by a widow and two daughters.

The following 2 references are also added as Mr Thom may well have been connected to these works too albeit he may have been working there as opposed to owning or managing the site.