12/07/1862 – Hamilton Advertiser – Accident – On Saturday, the 5th current, an accident occurred at a sandpit, Allanton. A boy, named Samuel Findlator, aged 14, residing at Morningside, went into the sandpit with a cart for a load of sand, in company with Thomas Marshall, carter to Gavin Pettigrew, brick and tile maker, and when assisting Marshall to fill the cart, the bank above gave way and squeezed him against the wheel, whereby he was severely injured about the body. Dr James Livingston attended. 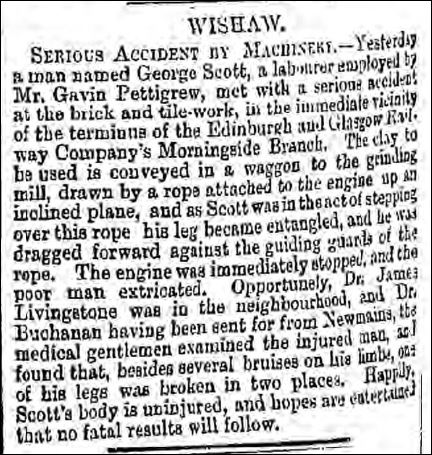 1893 – Messrs Loudon and Russell’s fireclay works – Situated at Morningside these works have been considerably extended in recent years. Besides the manufacture of ordinary fireclay goods, this firm have devoted a great amount of attention to the production of terracotta and horticultural ware of a highly artistic design.

16/07/1897 – Hamilton Herald – An appeal dismissed – On Tuesday, Sheriff Berry gave judgment in the appeal made by the Morningside Coal Coy against the decision given by the Sheriff-Substitute in their recent action with Messrs Loudon & Russell, brick and tile manufacturers, Allanton, Wishaw. Sheriff Berry dismisses the appeal, finds the appellants liable in expenses, and decerns.  In a note, the Sheriff Principal says: ‘l find it unnecessary to enter into detail in this case. The reasons shown by the Sheriff Substitute are, in my opinion, sufficient to justify granting of interdict.

11/09/1897 – Wishaw Press – Development of the coal and fireclay industries. The Chapel Collieries were recently acquired by a private limited company who intend developing the field considerably. On Thursday last, Mr Alexander Mitchell of Luscar, Dunfermline, chairman of the company. Mr John Motherwell of Rawyards, Airdrie and Mr George S Loudon, directors, cut the turf of two new pits about to be sunk to the Lower Drumgray coals. The larger pit is to be 16 feet by 9 1/2 feet and will be fitted with double cages and capable of dealing with an output of 700 tons per day. The smaller pit is to be 91/2 feet by 6 feet and so arranged to wind coal, should that found to be necessary. The most modern type of screening and washing plant is to be erected so as to place the coal in the best possible condition in the market. Fireclay of excellent quality is associated with three of the coal seams and it is intended to erect a fireclay works as an adjunct to the colliery. The mineral field extends to about 800 acres and is intersected by both the North British and Caledonian Railway systems allowing every access to the principal towns and shipping ports in Scotland. A branch railway about 800 yards long from the North British system to the new pits is in the course of construction and the various sidings are to be laid out so that the wagons, both empty and full, will gravitate to and from the screens thus avoiding all shunting operations about the pits. Mr Thomas Moodie, late of Earnock, has been appointed works manager and the mineral field affords ample scope for the exercise of his undoubted abilities as a colliery manager. The managing director is Mr Robert Ramsay, late of the Clackmannan Coal Company. A number of miner’s houses are to be built and those presently in want of repair are to be thoroughly overhauled so that the new company appear to be going into the development of the colliery with considerable energy. 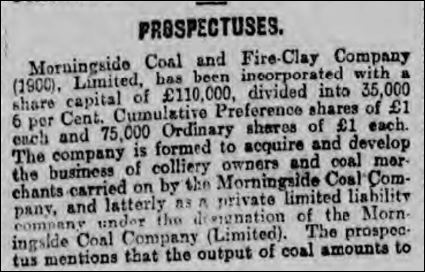 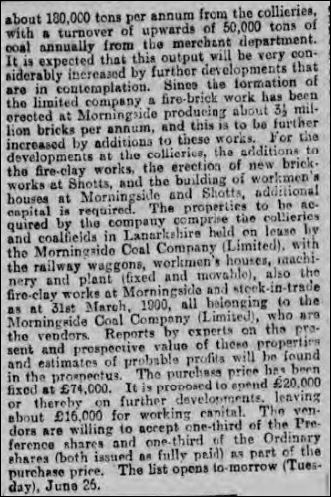 26/06/1900  – The Glasgow Herald – Morningside Coal and Fire Clay Company (1900) Limited prospectus.  – Share capital £110, 000. Among the directors is James Dunnachie, Jnr, Coal Master, Glenboig. Since the formation of the Limited Company in 1896, a Fire Brick Work has been erected at Morningside, producing about  3 1/2 million bricks per annum and this is to be further increased by additions to these Works. For the developments at the collieries, the additions to the Fire Clay Works referred to, the contemplated new brick works to be erected at Shotts and building of workmen’s houses at Morningside and Shotts, additional capital is required.

Fire Clay Field – the Vendor Company also possesses a large field of fire clay of a most refractory quality. The Fire Brick factory was erected in 1898 and is producing excellent brick. The factory is of the most approved modern construction and being within a few yards of the pit, the conditions for economical working are most favourable. The factory is capable of turning out 3 1/2 million bricks per annum in addition to blocks, covers, ground fire clays etc. The total tonnage if fire clay in the fields has been estimated by Mr David Rankine M.E at 2 1/2 million tons and Mr Robert Dougall, Fire Clay Manufacturers, Bonnybridge in his report states that practically there is an inexhaustible supply of raw material of first-class quality’

03/10/1902 – Edinburgh Evening News – In a circular just issued the Morningside Coal Company state that they have sold their business of coalmasters and fireclay manufacturers to the United Collieries Ltd.

12/08/1908 – Perthshire Advertiser – At Hamilton Sheriff Court on Friday, six boys were ordered to receive seven strokes each with a birch rod for doing £30 malicious damage at Morningside Brickworks. 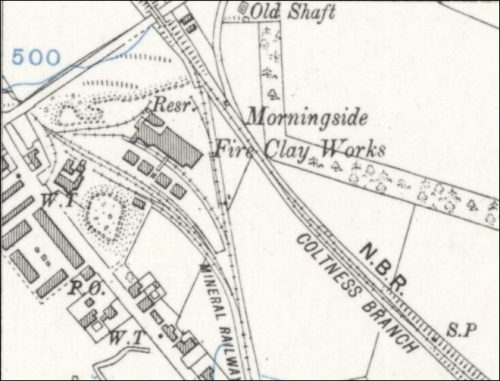 02/06/1917 – Hamilton Advertiser – By an outbreak of fire in the drying shed of Messrs Loudon & Russell’s brick and fireclay works at Morningside on Saturday night. Damage was done amounting to about £200.

1920 – Special report on the mineral resources of Great Britain – Chapel Coal Company Limited.
Morningside Brickworks, Newmains.
Situation: Near Morningside Station.
Geological formation: Coal Measures.
The fireclay used here is the floor of the Lower Drumgray Coal and is brought by rail a distance of about a mile from the company’s Chapel and Hyndshaw Pits.
The section of the seam shows fireclay variable between 2 and 3 feet. The clay as raised is grey, rooty and fairly hard; it burns a white colour and provides excellent material for making refractory bricks. It is ground at the works; the bricks are hand moulded, dried and burnt in coal-fired Newcastle kilns. The contraction is low being only 3/4 of an inch. This clay seems specially adapted for difficult shapes, and a large trade in these is done. For some of these, the ground clay is mixed with ground ‘grog’ (burnt bricks) and a proportion of a ground clayey sandstone from the Fauldhouse district. Reserves: If the quality of the clay holds good throughout the field, there are ample reserves in view.

16/07/1921 – The Scotsman – Morningside Fireclay Company to carry on the business of brick, tile and fire manufacturers and for that purpose to purchase as a going concern the brickwork and fireclay business carried on by Chapel Coal Company Limited at Morningside, Lanarkshire and other assets. Capital £16, 000 in £1 shares. A statement in lieu of the prospectus has been filed.

11/03/1932 – Edinburgh Evening News – Veteran Scots Manufacturer –  The death took place yesterday of Mr James Russell, Sedan, Newmains near Wishaw at the age of 90. First a clerk with the Coltness Iron Company Ltd, Mr Russell afterwards became a partner in the firm of Loudon & Russell Fire Clay Manufacturers, Morningside. He was 1 of 12 local businessmen who founded Pather Iron & Steel Company Limited, Wishaw. In 1889 he was appointed secretary and treasurer of the company and only retired from active service a few years ago, although he still retained an interest in the firm as a director.

23/9/1938 – Wishaw Press – Notable new fireclay mine. Morningside Company’s enterprise. Interest attaches to the recent opening of the Watsonhead Fireclay Mine by the Morningside Fireclay Company Ltd. The Millstone Grit formation has long been worked for fireclay in the Glenboig and Bonnybridge districts, but this is the first attempt to tap it for that purpose in the Morningside, by Newmains,  area. The company formerly made firebrick from the clay pavement of the Lower Drumbray coal at the Hyndshaw Pit, but last year it became apparent that this source was approaching exhaustion. The greater part of the new bed is of the same ” high alumina” quality as that of Bonnybridge, but the top ply is even richer, running as high as 41 per cent alumina. The new mine is entirely electrically operated as to haulage, pumping and ventilation and the pithead is a steel structure. It is designed for an output of 50 tons a day. The new brickwork is a 12-chamber Hoffman continuous kiln of the latest type and a Fawcett “stiff-plastic” brickmaker has been installed to turn out 10,000 firebricks per shift. The field is expected to last at least 50 years.

30/12/1938 – Wishaw Press – 1938 roundup – The Morningside Fireclay Company installed one of the latest types of Hoffman kiln which is capable of turning out 10,000 fireclay bricks per shift. This company also opened the Watsonfoot Fireclay Mine, which is entirely electrically operated and designed for an output of 50 tons per day.

24/02/1939 – Wishaw Press – Much regret was felt at the weekend when news of the death of Mr George Stirrat,  Lochview, Newmains. became known. For many years Mr Stirrat was works manager of Morningside Fireclay Company, and he was held in high esteem by the employees and villagers generally. He had a long and severe illness, which he bore with great patience and fortitude. Much sympathy is felt for his bereaved wife and family. 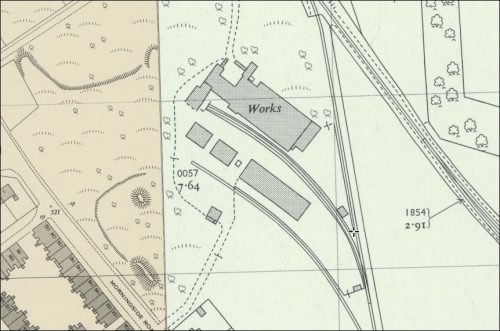 08/02/1963 – Wishaw Press – Ravenscraig keeps kilns busy. The new strip mill at Ravenscraig has been a blow against unemployment in Scotland – and not only among the ranks of the steelworkers. Two Scottish members of the National Salt Glazed Pipe Manufacturers Association have supplied many tons of fireclay pipes and fittings to the scheme. The pipes from four inches diameter upwards have been used in main and ancillary drainage networks. For the past five years Messrs Loudon and Russell Ltd of Morningside and the Heathfield and Cardowan Fireclay Co Limited, the two members, have been supplying fireclay pipe to the Ravenscraig Works. This has ensured full and continuous employment in both firms. Says Mr George Loudon, managing director of Loudon and Russell “During this time we have not only avoided laying off our people, but we have also taken on extra labour, and kept it”

1964 – Hepworth Iron Company (HIC) – A subsidiary company – The Lochside Coal and Fireclay Company Ltd. have acquired the whole of the issued shared capital of Loudon and Russell Ltd. of Newmains, Wishaw, Lanarkshire and also the fixed assets of the Cumbernauld Pipeworks from the Glenboig Union Fireclay Company Ltd.

Below – Loudon and Russell trademark. 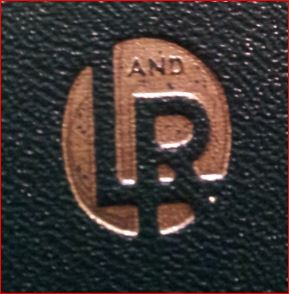