Scouringburn Brick and Tile Works, Scouringburn, Dundee. There is also a reference to the Dudhope Brickfield below. These may be one of the same or two different brickwork sites.

This old name for a burn running within Dundee has been replaced by the name Brook Street. Source

Formerly one of Dundee’s important watercourses, which gave power to its mills, the Scouring Burn rises at a spring known as Logie Spout, on the eastern slopes of Balgay Hill, but is today culverted for the entirety of its course. It flows east southeast, following Milnbank Road to Guthrie Street, then extending across the city centre to fall into the Firth of Tay immediately to the east of the Tay Road Bridge, having completed a course of 2 miles (3 km). The power of the water brought the development of mills and other industrial concerns in the Blackness area, including the Verdant Works. It remains important because it provides a flood risk within the city. Source

Below – Brick and Tile Yard to the NE. 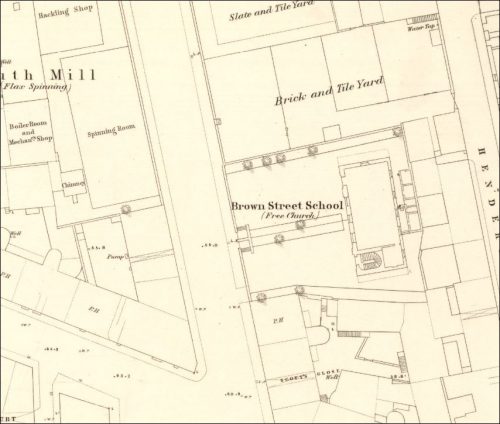 Below – Brickyard to the SE. 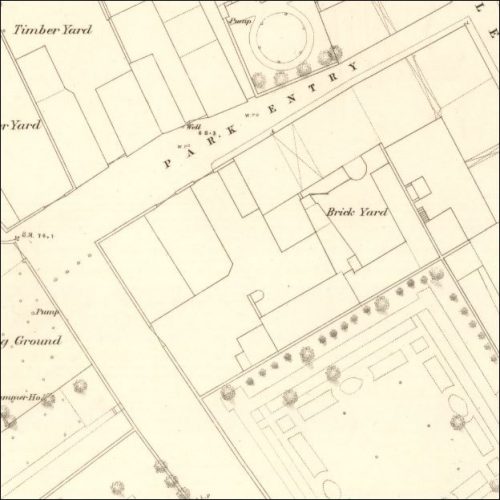 Below – 1857 – Map showing a brickfield to the North of Douglas Road. 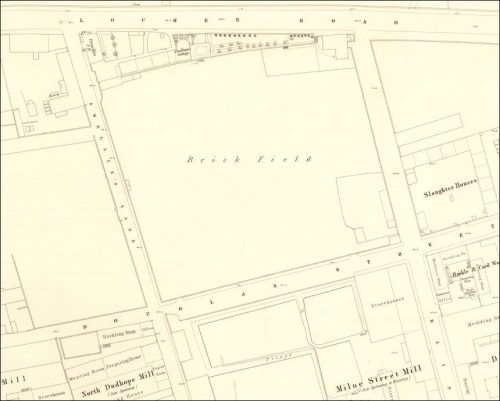 1861 – James Webster, brickmaker, Dudhope Brickyard, Dundee. (Note – SBH – I am uncertain if Dudhope Brickyard is one and the same as the Scouringburn Brick and Tile Works. They are certainly areas of Dundee that are situated close to one another.) 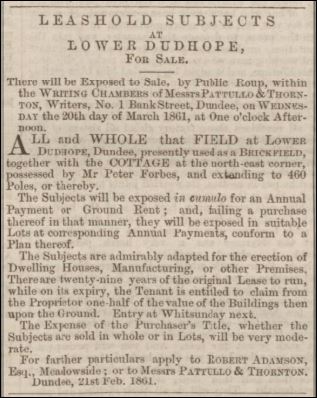 01/07/1861 – Dundee Advertiser – Boy drowned. On Saturday evening, about eight o’clock, a boy, named John Clark (son of Peter Cohan, labourer, residing in Millar’s Pend, Scouringburn), was drowned accidentally in a pool of water in the brick-field, Douglas Street, to the westward of the Public Slaughterhouse. It is supposed he had been playing with a piece of wood on the surface of the water, and, in stooping to pick it up, he had overbalanced himself and fallen in.

01/05/1866 – Dundee Advertiser – … In what was until recently the brickwork in Dudhope Road, a large new spinning mill of novel design has been commenced by Mr John Sharp. The building will be of red brick faced with white, of one storey and extending over a very large area. It will be the first mill of the kind in Dundee …