25/09/1935 – The Scotsman – Brick Factory to be erected. Use for colliery bings. Hamilton is to have a new industry in the form of a large brickworks. At a special meeting of the Hamilton Town Council last night it was agreed, by a majority, to grant Messrs Findlay (Finlay) & Co ., a Rutherglen firm of brick manufacturers, permission to erect a factory on the site of the former Clyde Colliery near the Bothwell Road. The factory it is estimated will employ between 50 and 100 men at its commencement, and almost 200 men when it is working fully. The Company will utilise the refuse of the old colliery bing, and also a large bed of clay which is on the site. In return for the use of the ground and the bing, a lordship of roughly 6d per 1000 bricks manufactured will be paid to the Town Council, and other payments will also be made. The Company are to utilise also the refuse of other colliery bings in the district and in this connection it is interesting to note that a number of unemployed men, who purchased a bing surrounding the plot at Allanshaw, have been approached by the Company with a view to allowing the bing to be used for brick manufacturing. They have been offered 6d per 1000 tricks manufactured as a lordship. The decision of the Town Council last night followed upon considerable controversy as to the advisability of allowing the Company to operate on the bing. A body of opinion was opposed to the scheme on the grounds that the brickworks would be in the centre of a new housing scheme at present in course of erection and would be adjacent to the maternity hospital. They contended that the work would create a nuisance because of the smoke, which would be detrimental to the interests of the tenants of the housing scheme and also the patients of the hospital. On the other hand, supporters of the project argued that it was necessary to waive these objections in order to attract industries to what is recognised as one of the most depressed areas in the country. It was pointed out that by the creation of a very high chimney the smoke nuisance could be averted, or at least minimised. In moving that the Council grant the necessary sanction, Sir Henry Keith stated that arrangements would be made to avert any nuisance which might be caused by the work. After some discussion, it was decided that these arrangements should be dealt with by the Finance and Assessments Committee. 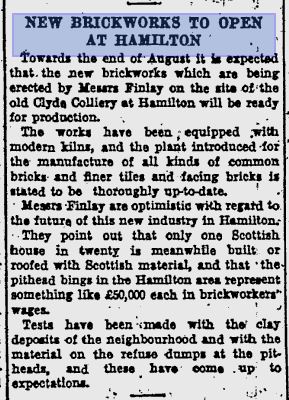 1946 – c.1968 – The 1985 publication ‘A survey of Scottish brickmarks’ suggests that Hamilton Brickworks Ltd operated the works during this time. 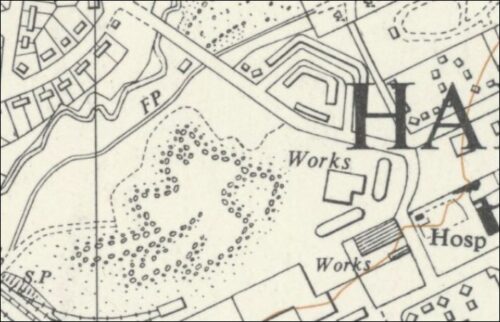 c.1960 – 1978 – The 1985 publication ‘A survey of Scottish brickmarks’ suggests the Caledonian Brick Co operated the works during this time.

1978 – 1980 – The 1985 publication ‘A survey of Scottish brickmarks’ suggests the Scottish Brick Corporation operated the works during this time.