Below – 1855 – This map shows the probable location of the Invertiel Brickworks when they were established at some date in the future. 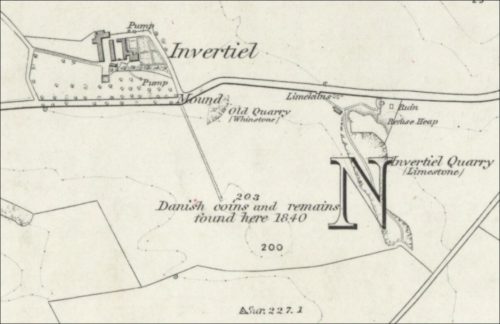 27/04/1877 – Dundee Courier – The Invertiel Limeworks. These limekilns, situated about half a mile from the West Bridge Turnpike on the road to the Grange, have been closed for above forty years, but now are rented by Mr Wm. Torris of Edinburgh, and are once more in full operation. During the last fortnight line of rails has been laid down from the mainline of the North British Company between Morningside and Kinghorn to the works, which will greatly facilitate the transport of the kilns. Extensive quarrying now shows that the limestone is abundant, and, we understand, first-class.

12/01/1878 – Fife Free Press, & Kirkcaldy Guardian  – A disputed contract – An action was raised in the debts Recovery Court, Cupar, on Thursday, by James Clark, John Taylor, and Andrew Eadie, contractors, against William Torrance, Invertiel Lime Works, concluding for £50 8s 4d, as account for “tirring” ground at Invertiel Lime Quarry.  It appears the pursuers contracted to “tirr” the ground for 1s 5 1/2d per cubic yard, but in consequence of not having got money fortnightly for work done, less ten per cent, as a guarantee for the completion of the job, they had refused to go on and stopped as soon as they came to rock.  For the defence, it was stated that the pursuers had been paid at the rate of £1 per week as agreed upon; that the sum sued for was not due, in respect the work was only to be paid for when completed; and that the pursuers, having only “tirred” the upper part, leaving the other strata, had been already paid more than they earned.  It was further averred that the pursuers had not only broken their contract but forfeited payment, and were liable for the damage.  Sheriff Bell aid it required a separate and special agreement to get payments t account, and where there was no such stipulation the law assumed that the parties had agreed that the whole work should be paid for when completed.  He could not hold that the supplementary agreement to pay by the fortnight had been made out; but, looking at the circumstances, as a matter of equity, it was quite within the province of the Court to settle the recompense to pursuers and to estimate the benefit to the defender.  It was here stated for the defender that he was now quite willing to consign the money until the work was completed.  The Sheriff said that probably the best course to pursue was to put an end to the contract and allow the defender to finish it himself.  He thought if he awarded £10 to the pursuers and put an end to the contract it was substantial justice.  He gave decree accordingly, it being understood there was to be no action of damage by the defender against the pursuers. Agents -Pursuers -T. Johnston; defender-T. Jackson.

15/01/1914 – Dundee Courier –  Death of well known Methil Man -There passed away yesterday after a period of failing health a well-known Methil man in the person of Mr David Philip at his residence, Craigie Lea, Innerleven.  Born 66 years ago at Dysart, Mr Philip started work in the pits in Wemyss district and was appointed while quite a young manager of the Invertiel Lime Works, Kirkcaldy, and was afterwards promoted by Mr Torrance the proprietor, to his larger works at Camps. East Calder.  Mr Philip returned to Fife on securing the management of the Wemyss Brickworks, Methil, a position he held for several years until the business was discontinued.  He was at one time, proprietor of the Commercial Hotel, Upper Largo, and up to his death held the license for Dock Tavern, Methil.  He was a man of a generous and kindly disposition, and so universally were these characteristics appreciated that he was known as “Uncle Davie.”  Mr Philip was an enthusiastic volunteer and was a member and bandsman of the 10th Company (Wemyss) R.G.A.  He was a keen bowler, and an ardent Freemason of Lodge Balfour, Methil.  The deceased is survived by a widow and five sons.