07/09/1849 – Glasgow Herald –  Horticultural exhibition and grand promenade … In front of this was a fine jet d’eau (fountain), with font beneath, raised on a pedestal, the whole composed of brick clay and the manufacture of the St Rollox Fire Brick Works Company, who also had a variety of other garden ornaments, including sundials, vases, pedestals etc interspersed through the grounds …

13/06/1850 – North British Agriculturist – Glasgow and West of Scotland Horticultural Society Exhibition – … awnings were also spread out in other parts of the grounds, which were also garnished as usual with choice varieties of oaken chairs and sofas, wire ornaments, consisting of bowers, flower stands &c and pedestals, stands &c from St Rollox Brickworks Company …

03/10/1878 – Falkirk Herald – Sequestrations – Service & Aitken, brickmakers, St Rollox Brickworks, Glasgow and David Dawson Service, brickmaker, Glasgow, as one of the partners of that company and as an individual. ( First appeared 28/09/1878 – Edinburgh Evening News)

22/10/1878 – The Edinburgh Gazette – Sequestration of Service and Aitken, Brickmakers, St. Rollox Brickworks, Glasgow, and David Dawson Service, Brickmaker, Glasgow, as one of the
Partners of that Company, and as an Individual. James Watson Stewart, Accountant in Glasgow, has been elected Trustee on the Estates; and Andrew Graham Service, Iron Merchant, Matthew
Lindsay, Builder, and Alfred Arthur Miller, Accountant, all of Glasgow, have been elected Commissioners. The examination of the Bankrupt will take place in Mr Sheriff Murray’s Chambers, County Buildings, Glasgow, on Friday, 25/10/1878, at half-past two o’clock afternoon. The Creditors will meet in the Trustee’s Chambers, on Monday the 4th day of November next, at twelve o’clock noon. J. W. Stewart, Trustee. 81 St. George’s Place, Glasgow, 21/10/1878.

Below – 26/10/1878 – Glasgow Herald – Examination of Service and Aitken. The bankrupts were brickmakers, St Rollox Brickworks, and David Dawson Service and Thos. Aitken were the individual partners of the company.  There were present Mr James Watson Stewart, accountant, trustee; Mr John Martin, writer, an agent in the sequestration; Mr jas, Cunningham, writer, for a creditor; and Mr Alfred A. Miller, accountant, a commissioner on the estate.

David Dawson Service, one of the bankrupts, deponed – I began business in 1876 in partnership with Thomas Aitken.  I put in £210, and Mr Aitken put in a similar sum.  I also borrowed money from friends.  I attended to the books and outside work.  The firm sustained losses by bad debts amounting to about £1200.  Mr partner absconded in August last, taking with him between £150 and £200.  I then found myself in difficulties.  The state of affairs shows the free assets of the firm to amount to £125 15s 10d, and the liabilities to £1050.  The plant and stock is hypothecated by the landlord for rent.  I cannot say how much cash was got in August, as Mr Aitken kept the books and took away a lot of money.  By Mr Miller-I did not remove any of my stock within 60 days of my bankruptcy.  the examination was concluded, and the statutory oath administered.  On the motion of the trustee, a warrant was granted for the apprehension of the bankrupt Thos. Aitken. 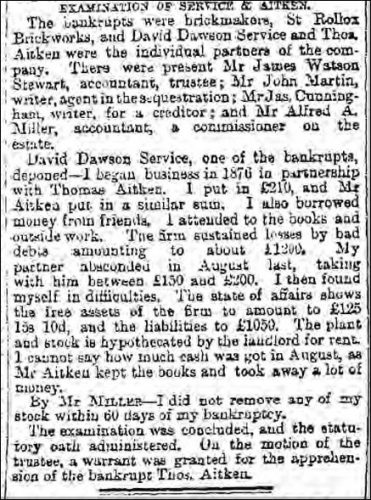 Below – 17/10/1880 – Edinburgh Gazette – I hereby call a meeting of the creditors on the sequestrated estates of Service and Aitken brickmakers, St Rollox Brickworks, Glasgow as one of the partners of that Company, and as an individual, to be held in the Trustees Chambers, 81 St George’s Place, Glasgow on Wednesday 8th September at 12 o’clock noon, to consider as to an application for the trustee’s discharge. J.W Stewart, Trustee Glasgow 16/08/1880. 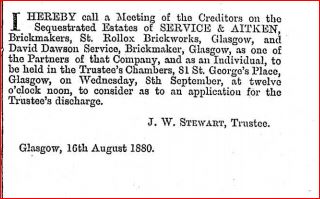 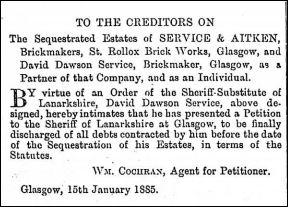 Below – 1910 – Map depicting an ‘old clay pit’ at St Rollox but this appears to have been worked by the Fountainwell Brickworks). 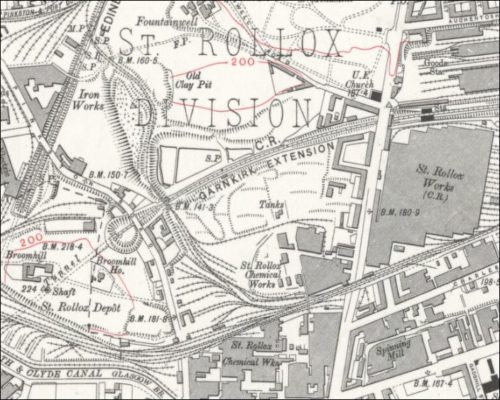