1895 – The 1985 publication ‘A survey of Scottish brickmarks’ suggests the works opened at this time.

22/06/1901 – Airdrie and Coatbridge Advertiser – Considerable excitement was created yesterday about two o’clock in Coatbridge when it became known that fire had broken out at the Drumpark Brickworks, owned Mr John Ellis, ironmaster. The Coatbridge burgh firemen were summoned to the scene by means of the siren and a considerable crowd of people gathered at the fire station. Excitement was pretty high and one man fell to the ground suffering from an apoplectic fit just at the Burgh Weighs Office. The horses with the hose and firemen careered along Bank Street at a good pace and in a comparatively short time the scene of the fire was reached. By that time, however, the fire had got a good hold and the entire machinery department was in a blaze. What made matters worse was the fact that a very strong wind was blowing and the water supply was scarce. A number of people belonging to the village lent their services and kept pumping water from a pond close by, while the firemen played on the burning building. The machinery department was built of corrugated iron and wood, while the pulleys for driving the machinery ran across the top of the building. This part of the premises was in a solid blaze and every other minute a crash was heard till eventually, the entire building collapsed. For a time, fears were entertained that a large new boiler might explode, and great pains had to be exercised by the firemen. The water was supplied from a pond close by, and a number of people belonging to the village lent a helping hand and the pump was kept going for several hours. The work which is known as Drumpark Brick Kiln, has just been recently erected at a cost of over £30,000. It was fitted up with all the latest American machinery and was likely to be in full swing in the course of a week or so, The machinery section has been completely destroyed, but the drying shed has escaped without injury. The little village of Drumpark was all astir and the greatest excitement prevailed. The fire was also witnessed by a large number of Coatbridge people. Fortunately, no accidents occurred.

23/10/1908 – Bellshill Speaker – … This building, which has been erected by Messrs Stewarts & Lloyds, Ltd, for the use of the workmen in their Clydesdale Works, occupies a commanding position on the north side of what is locally known as Clydesdale Road; adjacent to the main entrance to the works. The building is two storeys in height, and built of special facing brick from Drumpark, with stone dressings introduced at the main corners. … 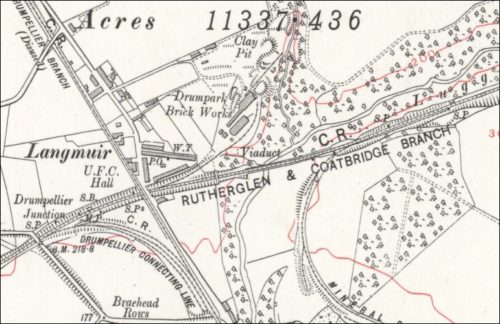 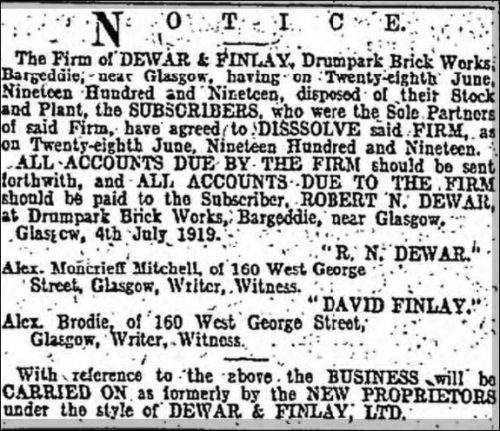 28/05/1921 – Airdrie and Coatbridge Advertiser – Glasgow acquiring brickwork. The Housing Committee of Glasgow Corporation have recommended that the Drumpark Brickworks, Bargeddie, be acquired at a price of £20,000. Originally the offer to the Corporation was to sell the works as a going concern for £24,500 but the lower price was ultimately accepted.

04/06/1921 – Forward (Glasgow) – Municipal bricks. The Labour policy of establishing Municipal brickworks is now admitted to be the most effective method of controlling supplies of bricks. Glasgow already owns three brickmaking plants and the Housing Committee recommends the purchase of a fourth at Bargeddie, at a cost of £20,000. The Middle Ward of Lanarkshire County Council has decided to acquire its second. If public ownership in the manufacture of bricks and other materials had been established in 1917 no housing schemes would have been hung up for lack of supplies. Municipal bricks save at least £20 per house.

19/10/1927 – Coatbridge Express – Airdrie Sheriff Court. A case regarding compensation was claimed by a woman who lost 2 fingers while working at Drumpark Brickworks, owned by Dewar and Findlay.

03/10/1931 – Airdrie and Coatbridge Advertiser – New Roman Catholic School, Coates Hill, Coatbridge … the structure is of a simple and substantial nature of brickwork harled with cement and having a base and other features of facing bricks from Drumpark …

30/05/1945 – Coatbridge Express – Girl workers admit a charge of malicious destruction. Three young girls who, while acting in concert, decided to place a steel knife in a machine in order to get “a spell” off work, appeared at Airdrie Sheriff Court on Monday. Elizabeth Foy, brickworker, 7 Dykehead Road, Bargeddie, and two juveniles admitted having on 27th April in Drumpark Brickworks, Bargeddie, while acting in concert, maliciously placed a metal brick mixing knife into a brick mould whereby it was damaged and put out of use until 30th April. Mr W. W. Allan, Procurator fiscal, said there were two brick making machines in operation at the works. Both were capable of turning out one thousand bricks an hour for the kilns. About 11.30 on the 27th of April these girls thought they would have what they termed “a spell” and they decided among themselves to stop the machine. A steel knife was placed in one of the moulds and it got jammed and stopped the machine. When warned and charged, Foy said that the second accused approached her and said she was “fed up” working. In regard to the stopping of the machine, Foy told her she would have nothing to do with it. The second accused had stated that Foy said she was quite willing to stop the machine if the youngest accused agreed. The youngest accused had agreed but had later taken “cold feet”. Foy had told the second accused to place the knife under a flight of stairs and the other girl would put it in the mould. The youngest accused had said she knew she would be found out but nevertheless had placed the knife in the moulds. Sheriff Prain imposed a fine of £3 on each accused, allowing two weeks for payment.

Below  – 01/01/1949 – Airdrie and Coatbridge Advertiser – Coal thefts endanger production. A man is arrested. 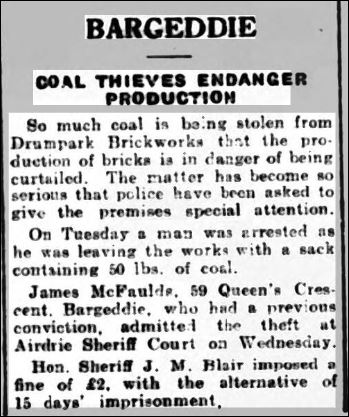 13/01/1951 – Airdrie and Coatbridge Advertiser – Fatal accident at brickworks – Peter McFaulds, aged 35, 38 C Coats Street, Coatbridge was instantly killed on Friday of last week when a flywheel of an engine in Bargeddie Brickworks broke. As a result of the accident, 30 workers were rendered unemployed.

Below – 31/03/1951 – Airdrie and Coatbridge Advertiser – Fatal accident at Drumpark Brickworks. 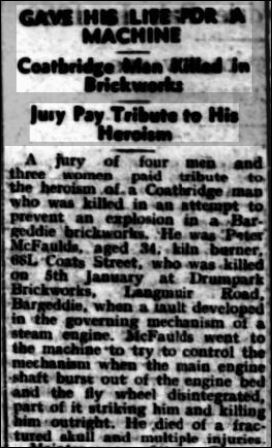 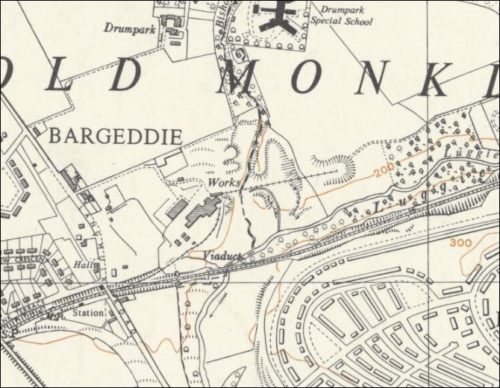 16/10/1954 – Airdrie and Coatbridge Advertiser – Many thefts of coal have been taking place at the Drumpark Brickworks of Dewar and Finlay Limited, Bargeddie and Police have arrested several persons some of whom have already been prosecuted … The principal offenders, it is stated, are women and children.

17/03/1956 – Airdrie and Coatbridge Advertiser – The Drumpark Brickworks social and dance was held in Ballieston Welfare Hall on Thursday of last week.

1977 – Drumpark Brickworks, Bargeddie, Lanarkshire (NS 704643) of Dewar & Finlay Ltd. were closed and sold up in May. One of the few Scottish works making plastic-clay facing bricks, Drumpark had an unusually wide range of kilns. The main kiln range was, unusually for Scotland, of the Staffordshire type, and there were circular and rectangular downdraught kilns., Much of the clay preparation and brick moulding machinery was by James Mitchell & Son, the Cambuslang clay machinery specialists.

Below – Unknown date – Bargeddie Brickworks, Glasgow. Part of the downdraft kiln at Dewar & Finlays Works. Also depicted a plastic – clay brick making machines at Bargeddie. The one on the right was made by James Mitchell and Son Cambuslang. 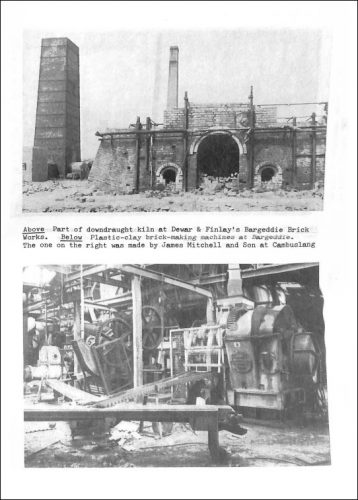