Captain Archibald Kenneth of Shewalton and his two sons Robert and James, were substantial coalmasters in Ayrshire, with several brickworks using the fireclay and blaes mined with the coal.  One of their earliest was the Eglinton Fireclay Works, on the east bank of the Garnock river between Buckredding House and Weirston Lodge, and beside the Eglinton Colliery.  This brickwork should not be confused with the Eglinton Iron Fireclay Works, which lay a mile to the south-west on the Ironworks site.  Kenneth’s Eglinton Brickworks is mentioned in Slaters Directory of 1889 and 1900, but it was demolished by 1911. Source Kenneth W Sanderson.

Eglinton Fireclay works – The OS map for the mid 18th century shows a clay mill, fireclay works and kilns at Buckreddan on the Bannoch Road.  Fire clay is used in the manufacture of fire bricks. The clay is resistant to high temperatures and is suitable for lining furnaces, as fire brick, and manufacture of utensils used in the metalworking industries. Fireclay was also worked at Perceton – info by a member of the Kilwinning Heritage

08/03/1852 – Glasgow Herald – 02/03/1852 Ayr. The subscriber residing in Wallacetown, Ayr has ceased to be a partner of the firm carrying on the business under the name of Archibald Kenneth and Company, as coal masters at the Eglinton and Dreghorn Collieries and as manufacturers of articles from fire clay and other clay at the Eglinton Fire Clay Works all in Ayrshire. George Taylor. J F Murdoch and J Murdoch witnesses.

08/05/1852 – Glasgow Herald – The subscriber, residing Wallacetown, Ayr, has ceased to be a partner of the firm carrying on business under the name of Archibald Kenneth and Company as coal masters at the Eglinton and Dreghorn Collieries and as manufacturers of articles from fire clay and other clay at the Eglinton Fire Clay Works all in Ayrshire. – George Taylor. Witnesses J.F Murdoch and J. Murdoch.

12/05/1855 – Ardrossan and Saltcoats Herald – Mr Kenneth of the Eglinton Brickworks is at present erecting forge hammers which will very shortly be in operation. 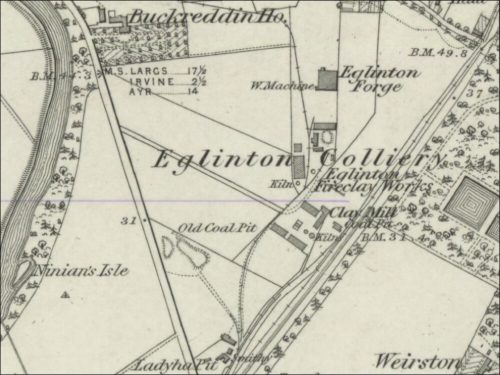 17/01/1863 – Ardrossan and Saltcoats Herald – One-day last week one of our policemen observed a person enter into the house of a well-known dealer in old metal, with some brass bushes belonging to an engine, under his arm, and soon after make his exit without them. Supposing they had not been honestly acquired, he made the acquaintance of the individual, and after a few questions, which rather confirmed his suspicions, he entered the house of the broker and found they had been sold for about 12s. Apprehension on suspicion was the result, and on further inquiry being made in another quarter it turned out they had been stolen from Eglinton Brickworks. The culprit who is from the neighbourhood of Kilwinning was brought before the Justices on Monday last and sentenced to twenty days imprisonment.

10/08/1867 – Ardrossan and Saltcoats Herald – Mr John Smith of the Eglinton Fireclay Works, here, being about to remove from this to become manager of the Dalquarran Fireclay Works, Dailly, belonging to the Right Honourable T. F Kennedy, Dunure, a number of his friends and brother-workmen met him on Saturday last in the Commercial Inn, and entertained him to supper. Mr John Craig, forgeman, ably performed the duties of the chair, and Mr John Wilson, blacksmith, worthily acted as croupier. Supper was served up in a most sumptuous manner by Mr Kennedy, and the arrangements were such as to reflect the highest credit on that gentleman. The night was spent in a warm and friendly manner, interspersed with songs and speeches, the speakers feelingly alluding to their regret at losing a worthy and valuable companion: at the same time expressing joy at his advancement in business. Mr Smith is well-known here as a steady, straightforward gentleman. He has been long connected with the temperance movement and was an energetic member of the Total Abstinence Committee. He leaves, therefore, with the best wishes of many friends.

09/09/1869 – Glasgow Herald – Ayr Council meeting … The following offers were accepted in respect of the proposed drainage work in districts 1 and 4 … and for supplying the fire clay for these works the offer of Messrs Archibald Kenneth & Sons, Eglinton Fire Clay Works, Kilwinning, amounting to £98 2s 11d.

15/08/1874 – Ardrossan and Saltcoats Herald – Railway excursion to Edinburgh … upward of 300 having been booked at Kilwinning Station alone … In connection with it we have to record an act of generous liberality on the part of the firm of Archibald Kenneth & Sons, of the Eglinton Fire Clay Works, here, some of the workmen having expressed a wish to go if they could get leave for the day, their employers not only granted this but turned the affair into a general holiday, granting a free ticket to each of the men with provision for refreshment while in ‘Auld Reekie’.

15/07/1876 – Ardrossan and Saltcoats Herald – The workers at the Eglinton Fire Clay Works here, had their annual holiday on Saturday last. The proprietors Messrs A. Kenneth and Sons, having generously placed a sum in the hands of their manager to defray the expenses thereof. They set out in machines for Largs and after spending an enjoyable day and extending their trip by steamer to Millport, they returned safely and orderly in the evening.

23/07/1887 – Irvine Herald – At Irvine Justice of Peace Court on Monday, before Mr Alex. Longmuir and Dr Wilson, James Watson, labourer, Patrick Docherty, ironworker, John Robson, labourer, and James Reid, labourer, were each charged with a contravention of the Trespass Act by having, on Sunday, 17th July, lodged in a brick kiln at the Eglinton Fireclay Works, near Kilwinning, without permission of the owners, Archibald Kenneth & Son. They all pleaded guilty, Docherty saying that he had walked from six miles beyond Dalmellington and that he was told by a man that if he went into the brickwork he might get lying down, but he would have to run his chance. The rest of them had a similar story. Mr Longmuir, in passing sentence, told the fireman that he must be more firm with such men, as it cost a great deal of money to convict them. The men were fined 5s, with the alternative of 3 days imprisonment. 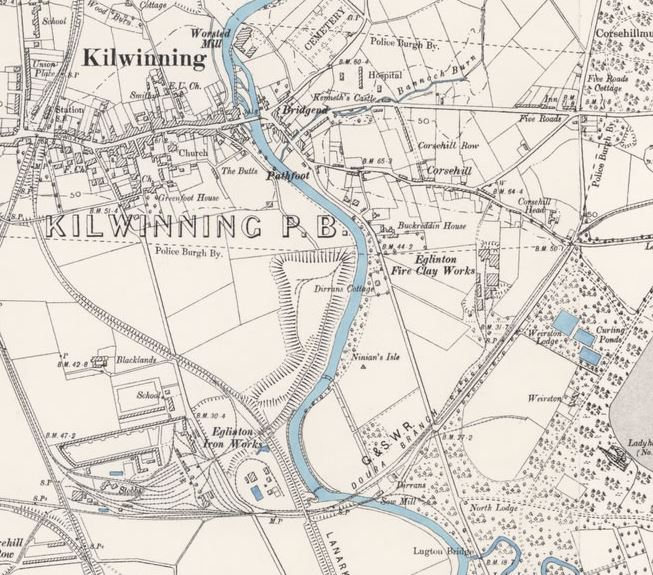