Canmore – The Brickworks were situated adjacent to central washery of A Kenneth & Son, which served a number of collieries in the area.

Below – 1908 – Montgomeryfield Colliery and Brickworks, Dreghorn. The colliery is depicted on the 1895 map but not the brickworks. 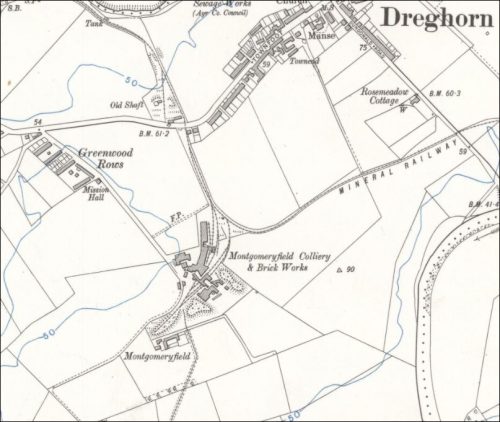 Below – 1938 – Montgomeryfield Colliery and Brickworks, Dreghorn. 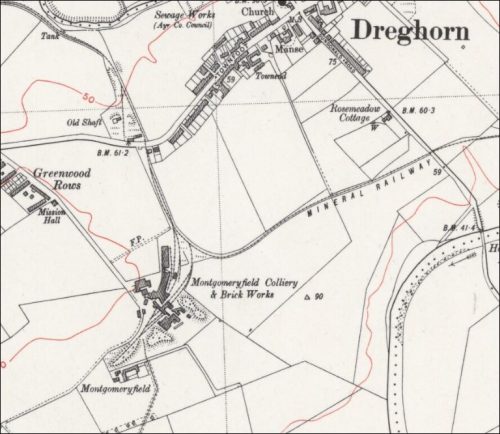 20/2/1942 – Kilmarnock Herald – Fatal accident enquiry into the death of Alexander McEwan King, 30 Montgomery Terrace, Kilwinning. Alexander was 14 years of age and was a brickworker employed by A. Kenneth and Sons Ltd, Coal Masters, Montgomeryfield Colliery, Dreghorn … he may have been accidentally struck by a lorry while stooping down to pick up coal …

22/02/1952 – Kilmarnock Herald – Brickworkers caught with coal. Three brickworkers were each fined £1 at Irvine J.P. Court on Monday when they admitted stealing coal from Montgomeryfield Brickworks, Dreghorn, early on Friday 1st February. The men were James Stewart, 1 Seaton Terrace, Irvine, James Wales, 12 Dirrans Terrace, Kilwinning, and James Hammill, Avils Cottage, Kilbirnie. The Fiscal, Mr J. Murray, said that the police received complaints from the firm of A. Kenneth & Sons, Ltd., about the theft of coal from Montgomeryfield Brickworks. It was suspected that the coal was being taken by men coming off the night shift at 6.30 in the morning. Two policemen went to the brickworks at six o’clock on the morning of 1st February, and after some time discovered the men carrying bags containing quantities of coal. While they were interviewing one man, Stewart came towards them with a bag on his shoulders. He had his head down and did not notice the police. He was stopped and questioned about the bag. When Wales was stopped it was found that he had 28 lbs. of coal in a bag. A similar amount was inside a canvas bag carried by Hammill. Wales said in court that he took the coal because he wanted to have a fire on cold mornings for his two sons going to school. Stewart and Hammill had nothing to say in court. They were all allowed seven days in which to pay the fines.