This venture was the largest of the four that smelted iron from local iron ore in Tasmania during the 1870s.

The company’s operations included an iron ore mine near Anderson’s Creek and a railway from the mine to its blast furnace and port near Redbill Point—now part of modern-day Beauty Point—on the West Arm of the Tamar River estuary in Northern Tasmania. Its blast furnace—the largest and most modern in Australia for its time—produced pig-iron June 1876 to August 1877.

Both well-capitalised and well-managed, the BTCIC used well-designed processes and equipment. However, the venture failed, mainly because the chromium content of its iron ore reached levels that resulted in pig-iron of an unsaleable quality. Consequently, planned expansion—such as steel-making—was never commenced.

After the BTCIC was wound up in 1878, the assets were sold to the ‘Purchase Company’; the new company tried to overcome the problem of high chromium content, but it eventually broke up and sold the assets at auctions held in June 1883 and February 1885.

Below – 28/11/1874 – Ardrossan and Saltcoats Herald – The Cape Finisterre – A novel cargo – During the past week a good deal of local interest has been felt in this new ship, loading here for Tasmania. The “Cape Finisterre” has been built for Messrs Abram Lyle & Sons, of Greenock, Messrs Thomas Wingate & Co., Whiteinch, Glasgow. Her register tonnage is 881 tons; carrying power about 1300 tons. She is in every respect a first-class vessel and has been finished in a most superior style. Her great strength may be judged from the fact that in her construction about 70 tons more iron has been used than is required by Lloyds. The poop contains saloon, chief officers berths, stewards pantry, staterooms, &c. These are all commodious, light, and airy. The saloon is tastefully panelled in teak, mahogany, and bird’s eye maple; the roof painted white and gold, with gold cornice. The house deck contains the cook’s galley and ample accommodation for under officers and apprentices. The forecastle has been constructed with proper regard for the comfort of the men. It is large, well-ventilated, and supplied with sliding tables for the men’s use when at meals or when off duty. On the top of the forecastle is a Watson & Ewing’s Patent Windlass; on the top poop, steerage gear of the most approved description; and their places elsewhere, a full complement of lifeboats. We need hardly say that where so much attention has been paid the interior fittings, the general harmony of proportions would not be neglected. She is a beautiful model, with a tasteful and well-designed figurehead. Captain Bryson is the master.

The “Cape Finisterre” was brought here to take in as cargo the complete plant for smelting iron ore in Tasmania, in which province this valuable metal has been discovered in large quantity, and of superior quality. The works are to erected near Launceston, about two days sail from Melbourne, by the British and Tasmanian Charcoal Iron Company (Limited); and it is interesting to notice that this is the first exportation of Blast Furnace plant to the Australian Colonies of any importance, and maybe the beginning of a large trade of this kind. We learn, too, that the furnishers of the plant are all West Country firms. Messrs Andrew Barclay & Sons, Kilmarnock, supply the machinery and ironwork; Messrs A. Kenneth & Son, Kilwinning, and Messrs Loudon & Russell, Newmains, the bricks and furnace blocks. In addition, the vessel takes out all the necessary tools of every description for carrying on the works when started. About a dozen mechanics go out to assist the erection and in the smelting operations, the management, we understand, having been entrusted a gentleman of considerable experience, Mr Robert Scott, late of Coltness Ironworks and Addiewell Oil Works. The comfort of the men while on the passage has been seen to in the arrangements made. Messrs James McEwan & Co., of Melbourne and London, are the shippers, and act as agents for the Company in this country and it not the least interesting circumstance in connection with this shipment that a member of the firm in Melbourne is Mr William Kerr Thomson, an Ayrshire man, and the son of a former Provost of Irvine, The Cape Finisterre cleared out on Thursday, having received an extraordinary despatch from the harbour officials. 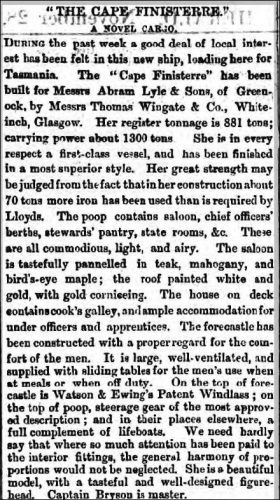 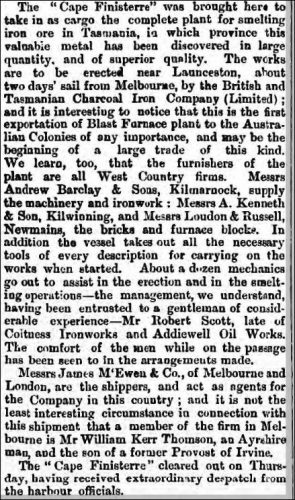 Below – 30/03/1875 – The Tasmanian – The Cape Finisterre arrives at West Arm, Tasmania bringing supplies to build an iron smelter for the British Tasmanian Charcoal Iron Company at Port Lempriere. 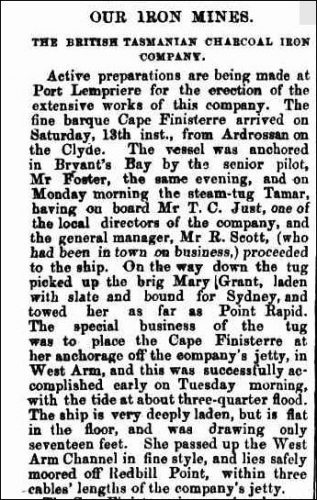 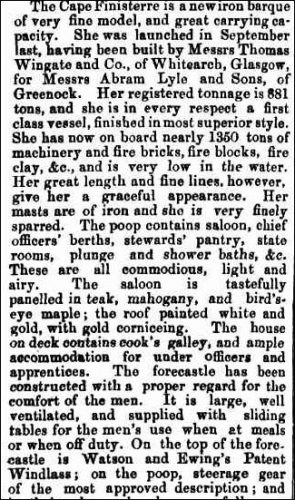 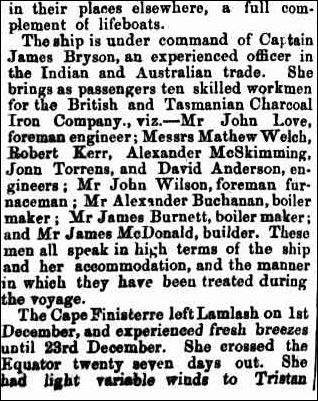 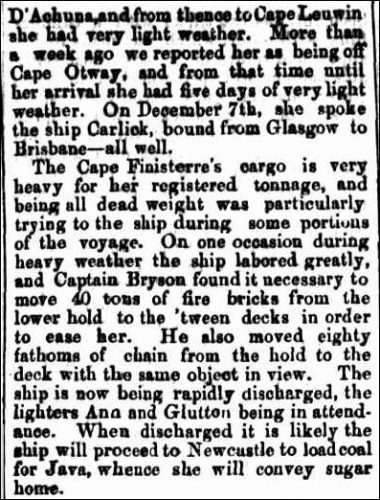 Below – The history of the Cape Finisterre. 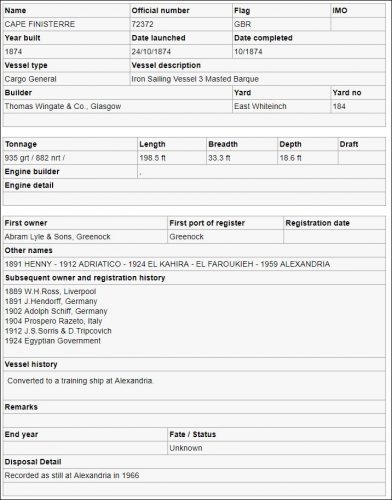 Below – The ‘Cape Finisterre‘ at an unknown port around Australia. Unknown date. 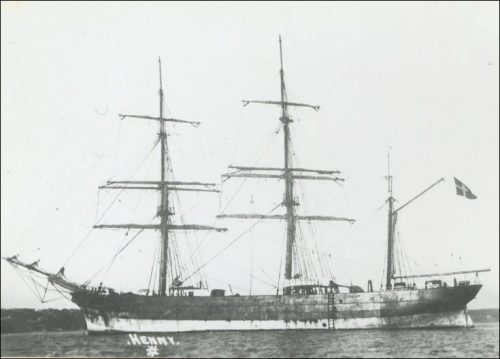 2019 – Following liaison with like-minded colleagues in Tasmania, a search of the land around Redbill Point revealed a broken Eglinton brick. Messrs A. Kenneth & Son, Kilwinning owned the  Eglinton Fireclay Works, Kilwinning, Ayrshire. There is every likelihood that this brick was transported to Tasmania aboard the Cape Finisterre. Also found on the Redbill site were broken fire bricks stamped ‘Davies’. It is entirely possible these were manufactured at the South Yarra Fire Brick Company, Melbourne, Australia which was founded by Robert ‘Daddy’ Davies. (Note – SBH – Many thanks to Bob Frost and Julieanne Richards, Collections Curator, Beaconsfield Mine and Heritage Centre, Tasmania). 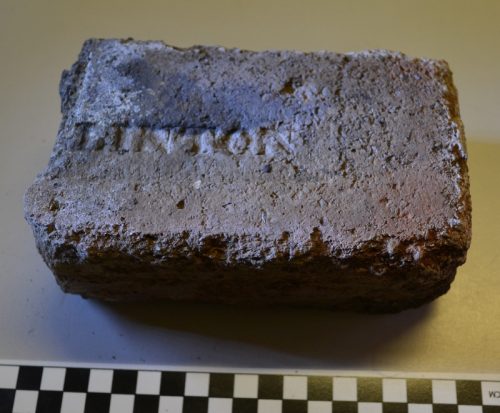 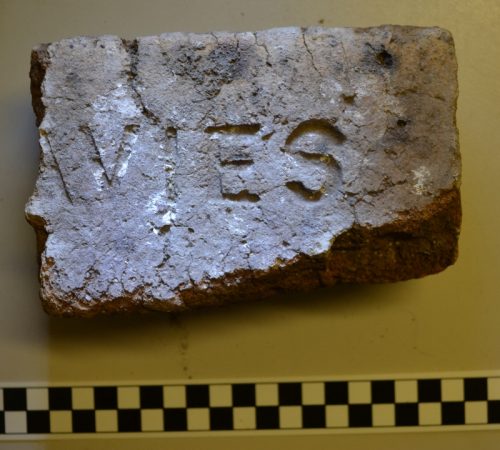 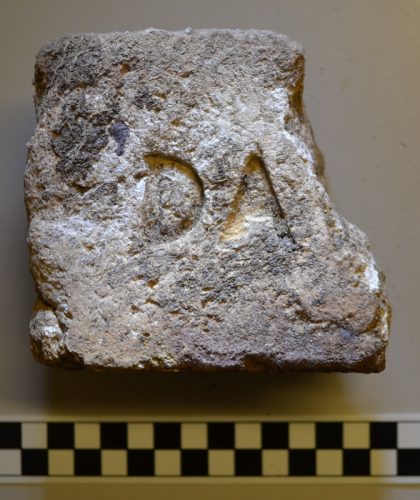 Julieanne Richard very kindly sent me extracts of books relating to the Redbill smelter. The following references to Scottish fire bricks and Scottish ironmasters were found within:-

”They had engaged the former manager of the Coltness Ironworks in Scotland, Robert Scott, as a consultant, Mr Scott was present during the April trials of Harrison’s furnace and persuaded the directors to develop a steelworks using blast furnaces and a Bessemer converter. Scott returned to Scotland to supervise the fabrication of the necessary equipment ordered on Andrew Barclay & Sons, Kilmarnock‘

“Above the masonry base is the hearth. What one sees now is the square setting of Garnkirk firestone, chosen for its proven lasting qualities in Scottish furnaces. Some Stourbridge fire bricks were also used as they were at Lal Lal but the company with its strong Scottish connections chose Garnkirk for its strength and reliability. The contrast with the policy of the investors in Bogolong in New South Wales at the same time is striking. At Bogolong the fire bricks were made locally on a country property called Woolgarlo. When the first tapping of iron was undertaken on 31/03/1874, the fire bricks simply burst and had to be replaced by bricks from Sydney before the next tapping on 20/05/1874. Woolgarlo and Garnkirk were worlds apart in every sense.  At Ilfracombe between the Garnkirk hearthstones and the stone base is a solid bed of bluestone’ … ‘The interior of the furnace, lined with Garnkirk fire bricks was 1.8m in diameter at the bosh contracting to 90 centimetres at the mouth’ … ‘The furnace hearth was small and square. The removal of much of the iron shell has exposed teh base of the hearth very instructively. Large horizontal slabs of firestone, imported from Garnkirk in Scotland, constitute the base, 84 centimetres square’

‘An iron will – Mining at Beaconsfield’ – Nigel Burch.

Nigel states the following in an email ‘In 1874 the BTCIC chartered the 881-ton barque Cape Finisterre, recently built on the Clyde, to bring a fully prefabricated iron smelting works from Scotland after the failure of their first smelter nearby. Part of the 1350 ton shipment were firebricks. Cape Finisterre departed 26/11/1874 from Ardrossan and carried Scottish engineers and workers as well, to set up and operate the plant and train locals in how to smelt iron. The site of the construction was at the base of Redbill Point but is now a caravan park. Nothing remains. In the past, the town was named Ilfracombe and Port Lempriere, but is now called Beauty Point.’