Below – 23/03/1934 – Motherwell Times – Good news for Coalburn district – It was officially announced on Saturday that William Dixon Ltd., coalmasters, Glasgow, had acquired from Mr A. S. Macharg, C.A., Glasgow, the liquidator of the Caprington and Auchlochan Collieries Ltd., the pits in the Coalburn area, which originally formed part of the mineral subjects worked by the firm in the County. For the past two years, the pits in Coalburn have been carried on under the management of Mr David Todd, who held his appointment under the liquidator. It is understood that Mr Todd is now to devote his whole time to the development of the Annandale Colliery and Brickworks, Mauchline, Ayrshire, which comprises another part of Auchlochan Collieries controlled by the liquidator. Despite the difficulties of the times, fairly steady employment has been found at Coalburn during the past two years for nearly 800 mineworkers, but the acquisition of the subjects thereby Dixon Ltd. is expected to give a new lease of life to mining in this part of the Upper Ward of the County. At one time the field was almost derelict, but the liquidator stepped in, and, with the assistance of Mr Todd, secured arrangements with the men which made it possible to work and maintain the collieries with a fair measure of success. It was stated on Saturday that Dixon Ltd., intends to retain the staff and the miners at the Coalburn pits and to embark as soon as practicable on a big scheme of development involving the dewatering of the lower seams. This expected to prove a costly undertaking, but it is fraught with great possibilities for this area of the Upper Ward, where there are believed to be abundant supplies of coal. William Dixon Ltd., have already considerable interests in this area, having collieries in Blantyre, Carfin, Polkemmet, and Wilsontown. Their acquisition of the Auchlochan Collieries is regarded as the most encouraging news that has reached Coalburn district for years.

Below – 10/09/1934 – The Scotsman – Colliery purchase – Bairds and Dalmellington – Mauchline workings – Mauchline Colliery, Ayrshire which originally belonged to the Caprington and Auchlochan Collieries Ltd, now in liquidation, has been acquired by Bairds and Dalmellington Co Ltd, a coal combine which has substantial interests in the same county. The figure reported to have been paid for the concern at Mauchline was £60,500.  The area of untapped minerals around Mauchline is one of the largest in Scotland, and with the development expected to be undertaken by the new owners of the colliery, work will be found for a considerable number of miners and other workers. Inquiry in the district reveals that 400 men are normally regularly employed at the pits but this figure is expected to be augmented when the new owners take possession. The liquidator of the Caprington and Auchlochan Collieries Ltd, Mr A. S. Macharg, C. A. Glasgow has intimated the acquisition of Mauchline Colliery by the Bairds and Dalmellington Co. to the creditors in a report just issued detailing the progress made since he took over the realisation of the estate. The undertakings of the Company, he explains, have been, carried on since April 1932, and have resulted in a profit of £18, 333 after providing for all charges, including the cost of the gradual development of Mauchline Colliery.  The Auchlochan pits of the Company have in the interval been acquired by William Dixon (Ltd.) for a substantial figure, while, the sale of Mauchline Colliery had also been agreed to. It was estimated that there would be available to the creditors a substantial sum. Mr Macharg explains that he will be left with the Annandale Brickworks which have a productive capacity of 1,750,000 common bricks per annum, and Annandale Colliery, where unwatering operations had been carried on. The dewatering of the colliery had been so successful that coal and blaes suitable for the brickworks was now being produced. Bourtreehill Fireclay Works had also been carried on successfully by the liquidator, and from the profits realised during the past year, a considerable sum had been applied to the reduction of debt. The liquidator concludes his report by acknowledging the valued services rendered by the committee who cooperated with him in the realisation of the subjects, Mr David Todd, the mining agent, and the members of staff.

28/09/1934 – Kilmarnock Herald – Operations to begin at Annandale Colliery. First move since the close down in 1928 – Hopeful news of returning prosperity is contained in the announcement that mining operations have been resumed at Annandale Colliery, Kilmarnock. The Herald is able to reveal that the pa is now being reconditioned preparatory to work re-commencing. Since 1928 when the Caprington and Auchlochan Collieries Ltd., went into liquidation, Annandale has remained closed. It is understood that the collieries have been re-opened owing to the necessity for finding material to supply the large output of the adjacent brickworks which are owned by the same company. A Herald representative was told yesterday that water had been allowed to rise in the shafts of the disused pit during the years it has stood idle. 30 men are now engaged in pumping operations and in excavating clay and coal. New coal cutting machines are also being installed and the management confidently expects that a further 100 men will be employed as work progresses. At present, the brickworks are producing one-and-three-quarter million bricks per month—an average of about sixty-four thousand a day. Many of the bricks are being shipped to Ireland. Housing schemes in Glasgow and the south of Scotland are also being supplied. It is primarily to supply the brickworks that the colliery has been reopened, but it is expected that activities will be extended to supply other interests as time goes on.  Since Annandale closed, the business has been carried on by a liquidator who has succeeded in disposing of the colliery at Mauchline and one at Auchlochan, Lanarkshire. The staff at Annandale has been reorganised and has worked under his direction to such good effect that the Company has been able to reopen this old colliery and bring hope once more to a distressed area. The clay in the workings of Annandale Colliery is particularly good for all classes of fireclay work and 100 men at the brickworks have been kept in steady employment for the past two-and-a-half years.

10/01/1936 – Kilmarnock Herald – Mr David Todd, formerly agent with the Auchlochan Collieries Ltd has received an appointment with Messrs A Kenneth and Sons, Dreghorn. He will have charge of a group of collieries including Annandale Brickworks. Mr Todd is a native of Kilsyth … 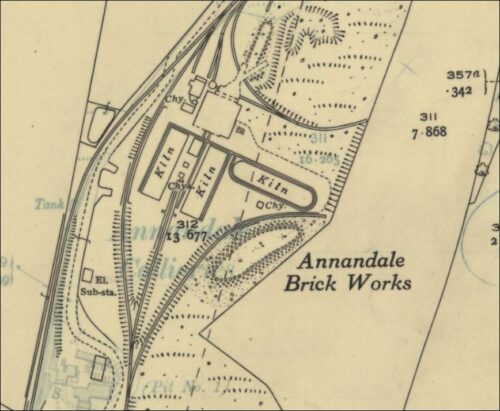 22/05/1937 – Kilmarnock Herald – We learn that the Annandale Brick Company have made preparations to move the Redan Refuse Bing at Garven Road, Stevenston. Some people think that they have begun in a very dangerous spot, that is in the top of the shank of the old pit that used to be there. It is possible that this mine may subside as it did some years ago. There is a considerable danger to anyone working there and we hope the necessary precautions will be taken.

31/12/1942 – Kilmarnock Herald – Theft … John Robertson a private in the Royal Scots Fusiliers and Alexander Kerr, another private in the R.S.F stole a clock from the Annandale Brickworks, Crosshouse on 2nd December … 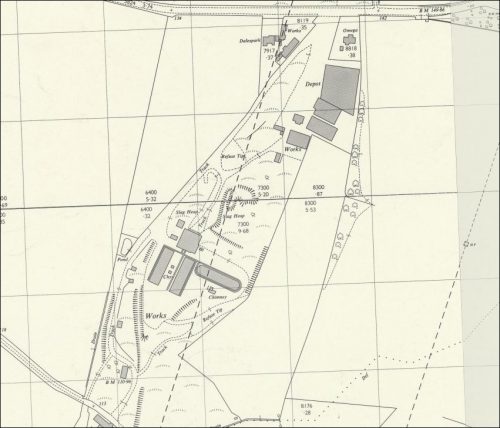 Below – 13/09/1946 – Kilmarnock Herald – Brickmaking at Annandale. Bricks are made from a mixture of coal pit slag. The mixture goes into this machine in which a slotted cylinder revolves and fills the slots which are, in turn, emptied by the large arm seen into the press on the right from whence they go into the nearby bogie looking like wet rubber blocks. All that is needed after this is firing and then you have bricks … without straw. 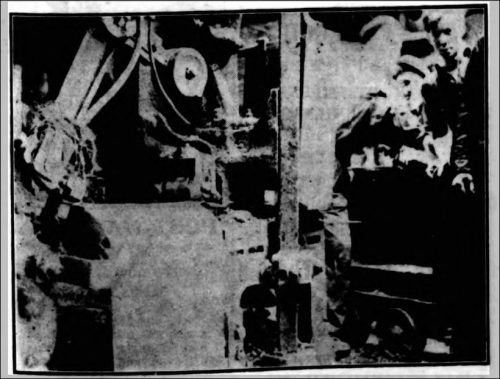 Below – 14/06/1947 – The Scotsman – Accident at Annandale Brickworks owned by Archibald Kenneth and Sons Ltd. 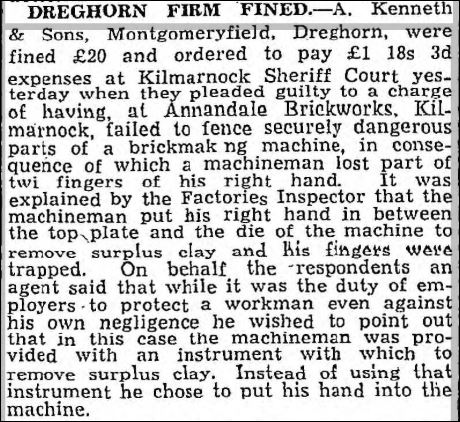 25/05/1979 – Kilmarnock Standard – Police at Kilmarnock are investigating the theft of 2½ tons of non-ferrous metal, worth about £800 from Annandale Brickworks at Annandale, Kilmarnock.