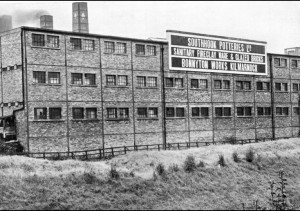 Southhook Fireclay Works – Dreghorn – The works was on the site of Southhook Colliery No. 1 Pit, which provided the fireclay.  Slater’s Directory states that John McKnight & Co. owned the works form 1889 to 1893, but by 1904 the works had been incorporated as the Southhook Fireclay Company Ltd.  Firebricks, glazed sewage pipes, and conduits for electrical cables formed the main products initially.  In the 1930s the name changed to Southhook Potteries Ltd., and the company bought Bonnyton Fireclay Works which nearly doubled their capacity.  Bonnyton had started prior to 1882 when it was owned by John Gilmour & Co., who had managed the Hillhead Fireclay Works before selling it to J. & M. Craig in 1867.  The owners had become Gilmour, Morton & Co. by 1893 up to the 1914 war.  Bonnyton Works was closed in the early 1970s and the site was cleared by 1973.

Among the many other smaller brickworks and mines in Ayrshire, the following produced fireclay or bauxitic clays, and most made some firebricks or refractory products such as chimney cans, and baby bricks for domestic fireplaces and stoves. Source Kenneth W Sanderson

Industrial and private rail lines. Ayrshire County pages contain details of Industrial and other Private lines that do not form part of any of the principally listed companies on this web site

Southhook Pit, one of the oldest clay pits in south west Scotland is situated near Knockintiber, just outside Kilmarnock. Now closed down, it once belonged to Southhook potteries, Ltd., one of the countries foremost manufacturers of sanitary ware and bricks. The first recorded use of the site was in 1877 but it is probable that ironstone was worked there earlier. The clay was peculiarly free from impurities and was specially adapted for the manufacturing of large pieces such as baths, urinals and sinks. The glazes were highly lustrous and guaranteed to be leadless and non-crazing. The pottery’s Bonnyton works in Kilmarnock were where they manufactured most of their products including their salt-glazed drainage pipes. In 1963 Shanks acquired Southhook Potteries, and then 2 years later in 1965 Shanks & Co. also acquired J&R Howie from Hurlford, and traded under the name of Howie Southhook. Shanks Holdings Limited merged with Armitage Ware Limited in 1969 to form Armitage Shanks.

09/08/1901 – Ardrossan and Saltcoats Herald –  Mr James Anderson Coalmaster, Craiglea, Troon, is one of the signatories to the Southhook Fireclay Company Limited which has just been registered. The capital is £10, 500 in £1 shares which have all been subscribed privately. The company has been formed to adopt an agreement with Anderson & Gilmour, coalmasters and brick manufacturers, Southhook, near Kilmarnock and to carry on the business. 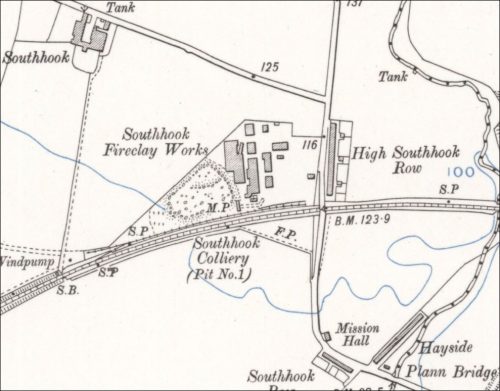 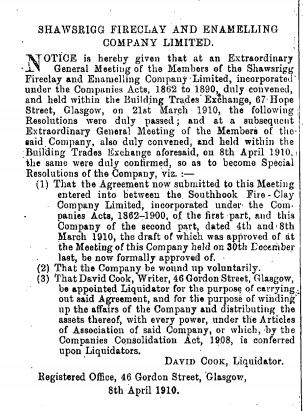 19/04/1913 – The Scotsman – The Southhook Fireclay Co are putting down a bore near to Warrickhill old mansion house (Ayrshire) to prove the minerals there.

Below –22/10/1914 – The Scotsman – Court case – Contract for bricks due for export to Canada. Appeal – Southhook and Shawsrigg Fireclay Co Ltd V Thomas Bell Sons and Co. 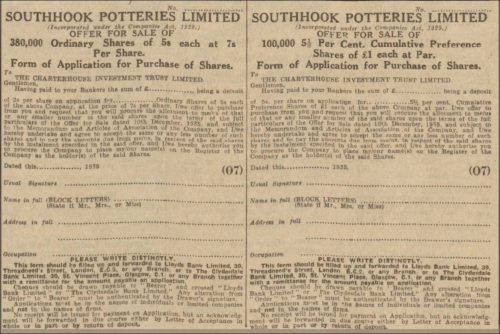 Below – 12/12/1935 – Dundee Courier – Company history. The Company which was incorporated as a private company November 1935, under the title Bonnyton Potteries Limited, was converted into a public company on 2nd December 1935 and has agreed to acquire from the Kilmarnock Trust Limited (now voluntary liquidation) as of 31st July, 1936, the business hitherto carried on under the name of Southhook Potteries Limited, excluding an unremunerative section of the business known as Shawsrigg Works. In addition, the Company has agreed to acquire outright my interests in certain Patents which have hitherto been operated by the Vendor Company on a profit-sharing basis. The business was founded 1901, and a reputation for quality and service has been built up amongst its customers for fireclay sanitary ware of all descriptions, glazed blocks and tiles, sewage pipes, fire bricks, facing bricks and building bricks. The main Fireclay Works known as the Bonnyton Works are situated at Kilmarnock, and the Company also owns at Southhook, some 2 1/2 miles distant, a lease of the property from which its raw materials are obtained. This property is directly connected with Bonnyton Works by railway, and the available supplies of clay are estimated sufficient to meet the Company’s requirements for over thirty years. At Southhook the Company also has works suitably equipped for the manufacture of fire bricks and building bricks. The productive capacity of the business has been steadily increasing during the past few years and the Company now owns one of the most modern and efficient fire clay works in the United Kingdom. The first rotary gas-fired kiln to be installed in this county was erected at Bonnyton Works in 1925, and after an experimental period proved so successful that a second kiln was installed in 1930. At these works, there are also a number Newcastle muffle kilns, which are in first-class condition. The Company’s products are supplied to Government Departments and to numerous private undertakings and public authorities at home and abroad. An extensive and increasing business in certain lines which the Company specialises in is expected to accrue from Municipal and other Housing Schemes which are now in progress or under consideration. 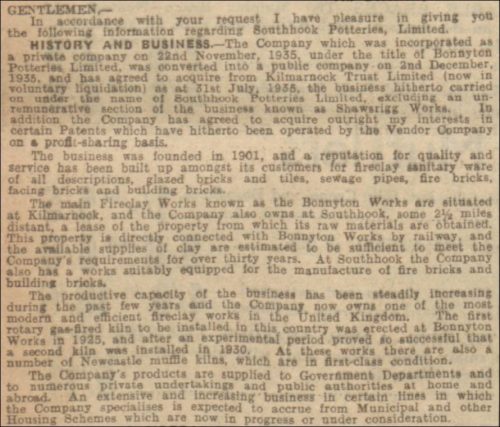 Below – 27/10/1936 – The Scotsman – Southhook Potteries Limited discuss trade and prospects. 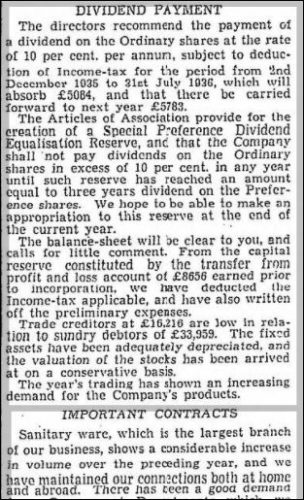 05/10/1937 – The Scotsman – Southhook Potteries Company which has its headquarters at Kilmarnock has acquired the whole of the issued share capital of the Bourtreehill Coal Co Ltd which has a connection in the fireclay and sanitary ware trade. 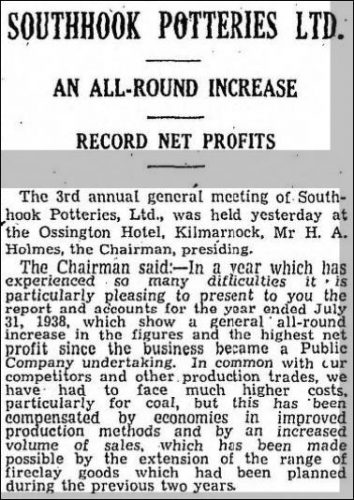 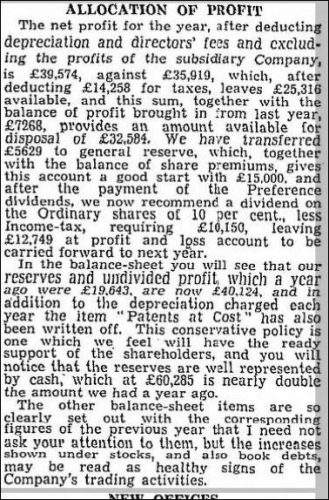 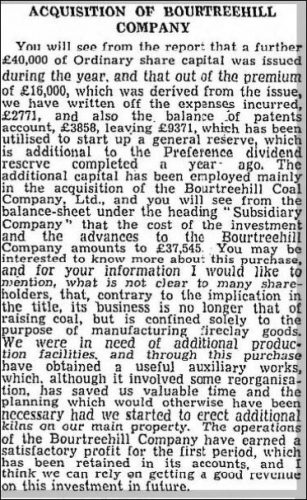 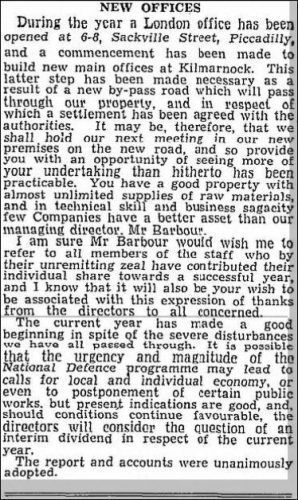 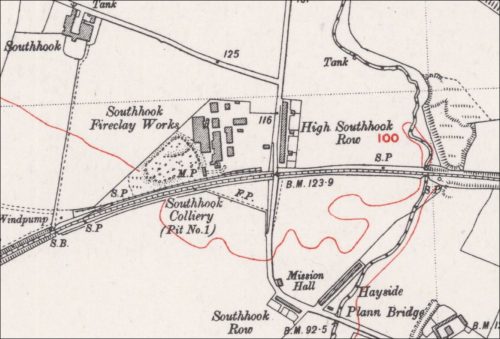 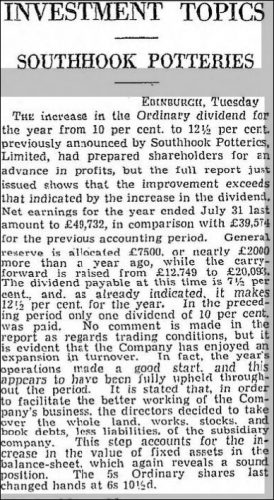 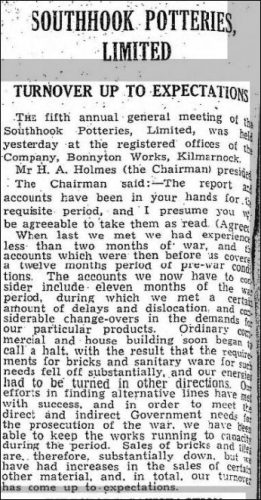 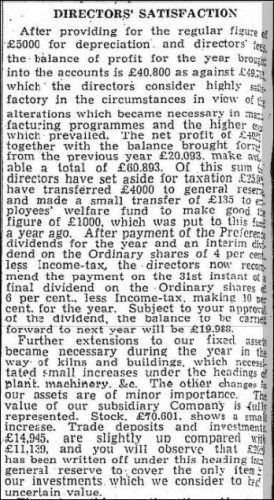 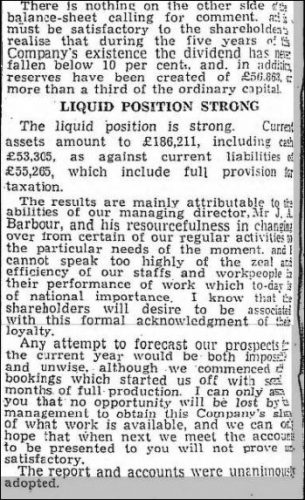 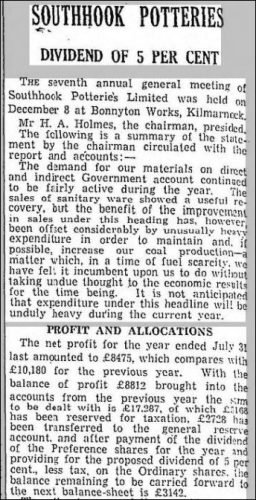 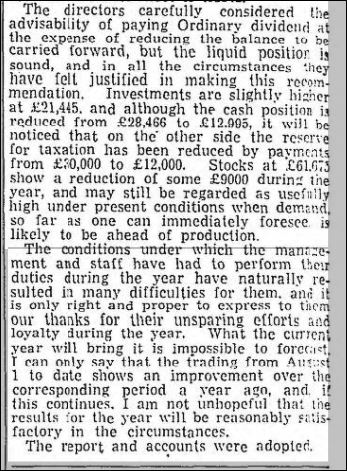 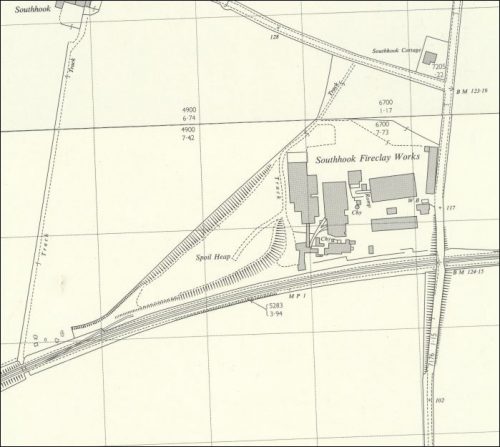 Below – 1944 – 1967 – Possible clay mine for Southhook Fireclay Works. It is situated just a few hundred yards from the Works. 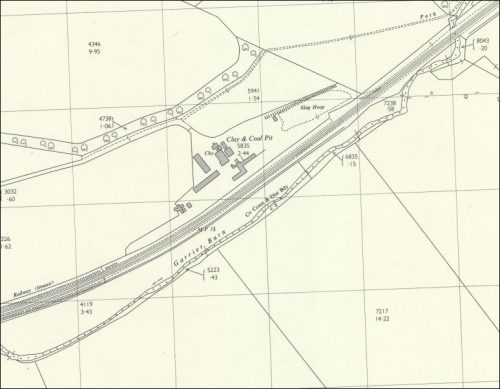 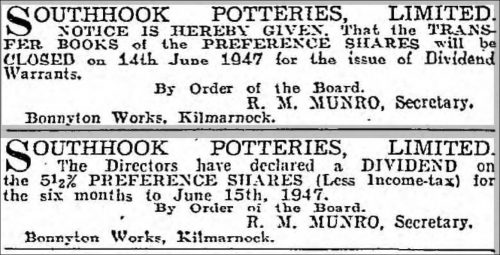 Directors of Southhook Potteries Ltd., Kilmarnock, last month attended a complimentary dinner in the Airport Hotel, Prestwick, in honour of their managing director, Mr James A. Barbour a well-known figure in the trade.  Mr Barbour has just completed forty-one years’ service with the Company, first of all as secretary, then as director and latterly as managing director, and last month’s function was arranged in order to present him with a gift to mark the occasion.  Senior members of the Company’s staff and guests from other Fireclay companies were also present.
In presenting Mr Barbour with a console television set from the directors, Mr William C. Thorne, chairman of the Company, who presided at the function, recalled how Mr Barbour had joined  Southhook in 1910.  Four years later he had been appointed as secretary and in 1924 he was elected to the Board and established as managing director.
“Mr Barbour has always taken a keen interest and leadership in the activities of associations connected with the trade,” said Mr Thorne, “and this is borne out by the fact that some of those most influential lay connected therewith are here tonight as his friends.  Mr Barbour reads and learns; he keeps his mind forever on his work and always puts his acquired knowledge to the test, Such experience and knowledge is, I should venture to say, second to none in the Fireclay trade.”
Mr Thorne went on to comment upon the many innovations and improvements made by Mr Barbour at Southhook during the past forty years, all of which had contributed in very large measure to making Southhook the great force it was today in the Fireclay trade.  He referred in particular to the interest which Mr Barbour had always shown in Bourtreehill, the mine where the Company gets most of its clay and some of its coal.  “Mr Barbour he said, “has always had a very keen interest in the mine which he recognised as the bloodstream of the Company, and development plans have been constantly exploring the possibility of the clay seams there.  Today we are working clay seams which are reckoned enough for a hundred years.”
In closing, Mr Thorne referred appreciatively to the co-operation and assistance which he had received from Mr Barbour since he was appointed company chairman in 1944.  “During these eight years,” he said, “I have come to appreciate the very high standard of knowledge expounded and put into practical use by Mr Barbour.”
Acknowledging the gift, Mr Barbour recalled how, very early in his career, he had coined the word “stickability” as his motto, “The word may be defined as the power of the individual to finish a job once commenced,” he said, “notwithstanding any difficulties encountered in the way.”
Proceeding, Mr Barbour recalled how, when he was engaged in the early development of Southhook, the gift of “stickability” had been a prominent feature of the many friends in works and office, who had assisted him in his heavy task.
“To mention any name at this moment would be invidious,” he remarked.  “We have been a very happy team.  It has required hard work from everyone but I do feel that the measure of success which has attended this hard work has to a large extent been ample compensation for the efforts which have been put forward.  It is a happy thought that the Company has prospered and become an organisation which is respected in the trade and of which we have every reason to be proud.”
Mr A. Campbell, another director of the Company, welcomed the guests and added his own tribute to Mr Barbour.  “It would be an unforgivable sin,” he said, “we’re into hesitate about adding my stone to the cairn of admiration and appreciation you, Mr Thorne, have raised to my colleague of forty years, Jimmy Barbour.  We were young men when we first met at Bonnyton but from that day until now has been to me an example of industry and indomitable Scottish courage.”
Mr R. M. Munro, secretary of the Company, said that Mr Barbour’s failures were but the stepping stones to achievement.  He had never depressed his colleagues when his experiments were not successful.  On the contrary, he had immediately set himself to experiment further until he had attained his objective.
“This presentation is long overdue,” said Mr John Bruce, works manager.  “No man is more entitled to the recognition the Board has conferred on him tonight.”
Other tributes to Mr. Barbour were paid by Mr. H. Preston, director, Mr. M. Young, director, Mr. M. Logan, engineer, Mr. R. Shaw, Bishop Auckland, Mr. Gilbert Shanks, Messrs, Shanks & Co. Ltd., Barrhead, Mr. H. V. Argyle, chairman of the Fireclay Manufacturers Association, Mr. F. Bloomer, secretary of the Association.
A vote of thanks at the close to the chairman was proposed by Mr J. Laird, director. 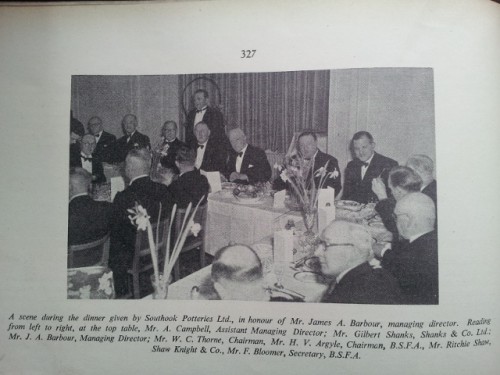 21/09/1954 – Yorkshire Post – Southhook Potteries announce that Mr James A. Barbour has resigned from the board.

08/03/1963 – The Glasgow Herald – Shanks take over offer – Shanks & Co., of Barrhead, the sanitary engineers and fireclay manufacturers, are offering to take over Southhook Potteries, of Kilmarnock, who are in the same line of business. The directors of both companies have agreed on the merger. Details of the terms of the offer to Southhook Potteries share-holders appear on page 4. Both companies originated last century. Shanks have two works at Barrhead and one at Kilmarnock. Their net profit for 1961 was £80,787 and an Ordinary dividend of 12 1/2 per cent was paid. Southhook’s net profit for the year to October 31, 1962, was only £797 and no Ordinary dividend was paid.

Below – Believed to be a photograph of the Southhook Brick Work and Potteries, Kilmarnock. Date unknown. 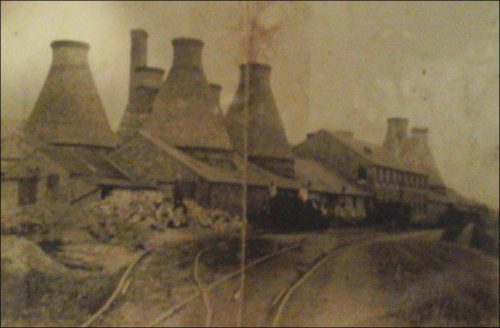 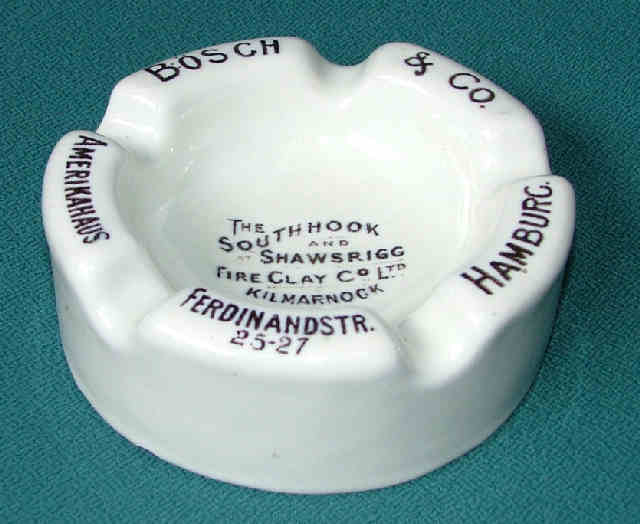 Below – The Scottish Industrial Archaeology Survey published a report in 1985 entitled ” A survey of Scottish brickmarks. During the compilation of this report in which the survey officers visited working and derelict brickworks sites, many items of interest were donated or found. Many of these items were thereafter donated to the National Museum Scotland. The item below is one of these items. An iron stamping plate marked ‘Southhook’. 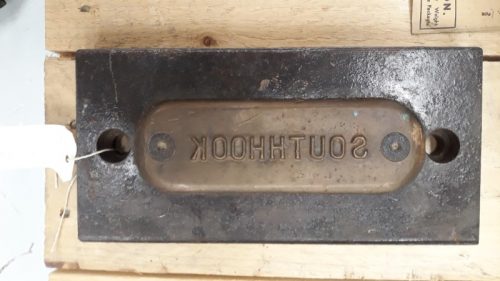