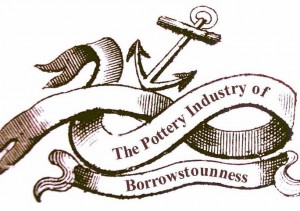 The production of pottery at Bo’ness probably began around 1766. The original site was situated on the south side of the main street and became known as the South Pottery in order to distinguish it from other parts as they opened up.

Using mainly local clay the enterprise produced solely pottery and by the 1790’s it had the largest output in Scotland.

During the next few decades, the works expanded and changed ownership. By the late 1830s or early 1840s, John Marshall, a local corn merchant, had gained an interest in the pottery. By the 1860s the Company was in his sole charge and had become known as John Marshall & Company. It is under his management that bricks began to be sold at the works.

The potteries covered their greatest area in the 1840s. The potteries on both the north and south of Main Street possessed 2 rectangular kilns. The northern pottery also had a bottle kiln. Large tanks were used for storing the raw materials.

From an advertisement in Slaters Directory 1867, it would seem probable that the clay for this new branch of the industry was mined at Birkhill and subsequently ground by watermill at Tods Mill on behalf of the pottery at Bo’ness. Indeed the mill may have actually fired the bricks and then transported them to Bo’ness for sale, as there is no mention in the records of the properties in Bo’ness manufacturing bricks. 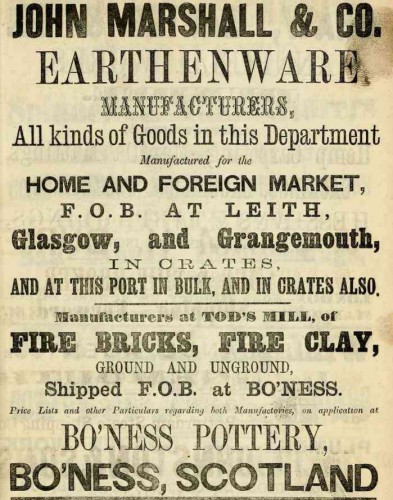 In 1867, John Marshall took William McKay on as a partner and after the death of both of these partners, Williams brother, Charles Mason McKay took control of the works in 1880. Six years later he left the works in the hands of John Marshalls sons and left to found his own pottery at Bridgeness. Financial difficulties and the collapse of the storage room floor caused the firm to go into liquidation in 1898 and to be sold a year later.

Several of the ex-employees of Bo’ness subsequently went to work for Charles McKay at Bridgeness. (Bricks may have been made at Bridgeness too but this is uncertain)

Below – 1878 – Advert for John Marshall & Co, Bo’ness Pottery. (Note – SBH – There is no mention of any bricks being manufactured). 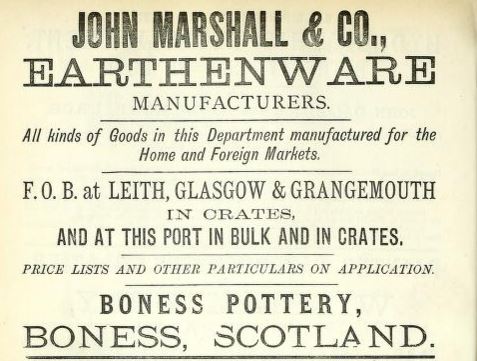 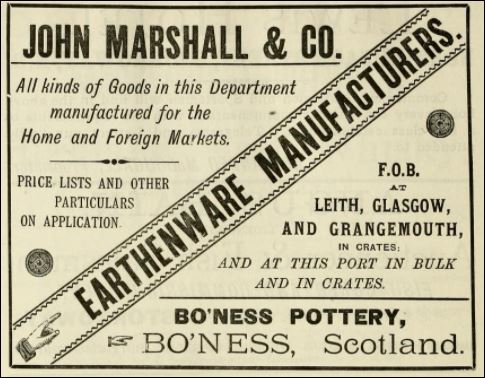