The site itself is not identified on the ordnance survey maps for the area, however on the north side of the Stirling to Falkirk railway line as it bisects Falkirk,(NS 884 804) 3 buildings are marked Bleachfield. In addition to the south of the railway, another site is marked Kilns house and old kilns. – Source Falkirk Museum and Archives 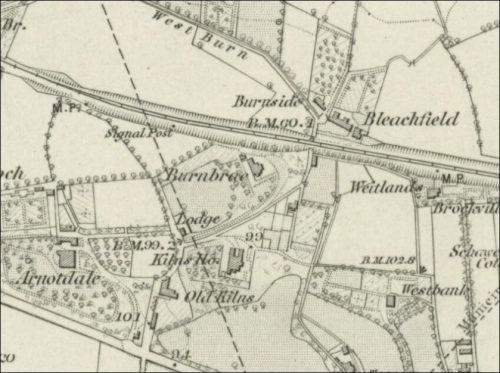 13/05/1876 – Falkirk Herald – A new brickwork. A letter was read from Mr Thomas Reid, Bathgate, submitting plans of, and asking permission to build a brickwork in a field to the west of the Grahamston railway bridge, bought from Messrs James Aitken & Co., brewers. Mr Reid in his letter stated that the works would be built the most approved principle, that the greater part of the smoke would be burned and the steam-condensed, and that there would be no foul gas. He also asked permission to put up temporarily, a few open kilns, in which to burn bricks to build a stalk with. The Council, in the absence of any specific information as to the buddings, declined to give consent to their erection in the meantime, reserving, however, to Mr Reid to renew his application with further information … (Note SBH – Thomas Reid was concerned with at least the Bleachfield and the Springfield Brickworks, Falkirk. I am uncertain which brickworks this article refers to but Bleachfield looks the more likely). 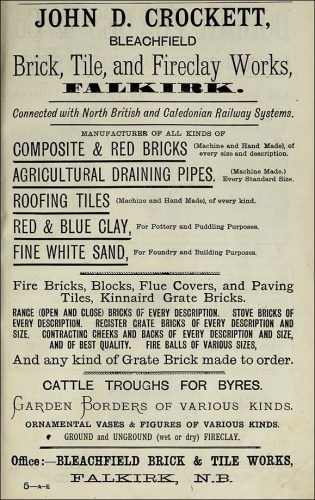 16/11/1887 – Falkirk Herald – Break up sale at Bleachfield Brickworks – The machinery and implements at Bleachfield brickworks were yesterday offered for sale in lots and realised over £300. In October last the plant failed to find a purchaser at an upset price of £250.

By 1922 the ordnance survey maps show the sites had been incorporated into the Parkhouse Ironworks. Today a school is situated on the site. Source Falkirk Archives.