Is this company connected to the Airdrie Brick Company?

Airdrie House Brickworks, Airdrie, Lanarkshire AKA Mosside Brickworks or was this a separate site?

Airdrie House (now Monklands General Hospital)  Most of The Moss and the area around Whinhall belonged to the Airdrie House Estate until the beginning of this century. The estate was owned and occupied by the Hamilton family for nearly 300 years and it was Robert Hamilton who is credited with being the founder of Airdrie in 1695. The Hamilton reign came to an end in 1749. In 1769 the Aitchison’s bought the estate that the Alexanders later inherited. In 1987 Sir John Wilson bought the estate and it was to be the home of the Wilsons until it became the local maternity hospital in 1919. This closed in 1962 and was demolished in 1964 to make way for Monklands General Hospital that opened in 1977. 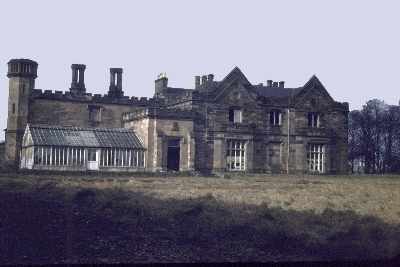 Airdriehouse Brickworks – Bricks were needed for the furnaces and for general building. For a short period of time at the end of the 19th century, the Airdriehouse Brickworks carried out quarrying operations just north-west of Airdrie House, near the railway sidings. Little is known about the brickworks but that they quarried on the site of an old ironstone pit for a few years but this was later abandoned.  The Penny Spring flowed into the crater and it became the first pond.

1867 – Airdrie Brickworks were owned by Nicol and Thom. Products included firebricks and composition bricks. (Note – SBH – Is this the same company as Airdrie House Brickworks)

Below – 07/11/1874 – Hamilton Advertiser – Court case regarding the leasing of land with coal and fireclay rights by Robert Brand and Jonathan Hyslop at Greenhead, Coltness.

26/11/1894 – Mining Institute – A letter – The first from J.B. Atkinson to Jon Hyslop of Airdrie House Brickworks, Airdrie, confirming that they have begun working coal by means of a slope at the brickworks.

28/02/1895 – Mining Institute  – Letter from J.B. Atkinson to Jon Hyslop at Airdrie Home Brickworks on the subject of Mosside coal. 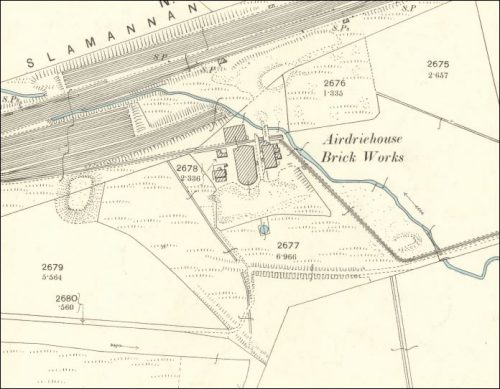 12/06/1897 – Airdrie and Coatbridge Advertiser – Dean of guild court. At this court on Thursday, before Dean of guild Wilson, Bailie Bannen and Councillor Bruce – Mr Jonathan Hyslop, brick manufacturer, was granted leave to make additions on his cottage in St John Street.

25/02/1899 – Airdrie and Coatbridge Advertiser – Nine valuable works on coal, iron, and oil industries, etc., have just been presented by Mr Jonathan Hyslop, Airdrie House Brickworks. Visitors to the Museum can now feast their eyes on the Airdrie Charity Cup, placed on exhibition there by the committee.

06/05/1899 – Airdrie and Coatbridge Advertiser – About 8.30 on Wednesday morning fire was discovered to have broken out in the dwelling-house belonging to Mr Jonathan Hyslop, brick manufacturer, 62 St. John’s Street. The fire originated somewhere about the chimney but was speedily extinguished by the Burgh Fire Brigade. The damage is slight and will be met by something less than £1.

Below – 17/07/1943 – Airdrie and Coatbridge Advertiser – An article retelling how a sinkhole appeared at the old brickworks of Mr Jonathan Hislop some 25 years ago. (Bote – SBH – I have included this reference as it infers the bricks works were ‘old’ ie not in existence, in 1918.)