To be read in conjunction with the page for the United Fireclay Products Limited.

Below – 1955 – These buildings are believed to be the West Works (Note – SBH – This information has come from a former employee there). 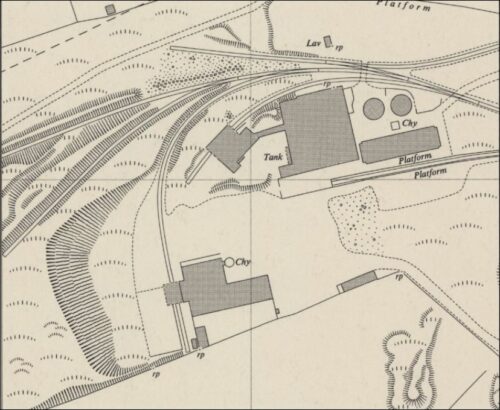 1960 – An article entitled ‘A look at the Armadale Works of United Fireclay Products’ which appeared c. 11/1978 in the Refractories Journal states “The tunnel kiln at the West Works was originally built in 1960.

1960 – 1971 – The 1985 publication ‘A survey of Scottish brickmarks’ suggests that the United Fireclay Products Ltd operated the works during this time.

19/05/1967 – West Lothian Courier – Old in years but modern in outlook. At their Bathville Works, United Fireclay Products Ltd, a wholly-owned subsidiary company the Woodall-Duckham Group, produces building bricks, sanitary pipes and a range of refractories and refractory specials for use in a wide range of high-temperature furnaces. At all times it has been the policy of the company to endeavour to meet the ever-changing and more rapidly changing demands in the technological field and to this end, it has well-equipped laboratories to assist with not only the technical control of its product but for research and development purposes.

The production capacity at Armadale in building bricks and pipes is substantial in relation to the total Scottish production of these commodities. The company’s effort in this direction, in terms of bricks produced per annum, is approximately the equivalent of 2500 complete houses and its pipe production, using the same comparison, meets the requirements of 6000 houses per annum. This section represents approximately half of the company’s production.

In contrast to the building materials section, the other half of the company’s activities embrace the very specialised field of high duty refractories and refractory specialities, which products find application in all of the major high-temperature industries throughout the world. Refractory or heating bricks are used as furnace linings in the many and varied industries where high temperatures are required.

At the Armadale Works, refractory is carried out at the Atlas Works, which been established for many years, and at the modern tunnel kiln at the West Works. It will be appreciated the very nature of the business described and the field of distribution calls for a wide variety of skills and training. The company employs approximately 400 operatives and staff and offers scope in a variety of unskilled and semi-skilled jobs in the production of bricks, pipes, refractories, clay mining etc and in addition, offers the opportunity for training in many specialised jobs. It is company policy to encourage promotion in any section of the business from within, if possible, and this policy can enable an employee if he is capable, competent and prepared to take the appropriate training, to obtain progressive advancement and indeed in exceptional cases to top management.  Every encouragement is given to young people, and indeed to any employee, to take full advantage of further education, by way of day release or evening classes. There are many interesting, stimulating and challenging posts within the company and prospects are good, but it is not possible, in the limited space available, to describe these adequately. A warm welcome is extended to the individual, or group, to visit Bathville to see for themselves and to have a chat with the management and others concerned in their particular interest.

1971 – 1981 – The 1985 publication ‘A survey of Scottish brickmarks’ suggests that Gibbons Dudley Ltd operated the works during this time. 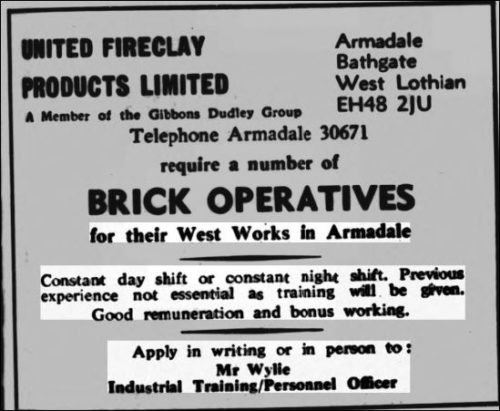 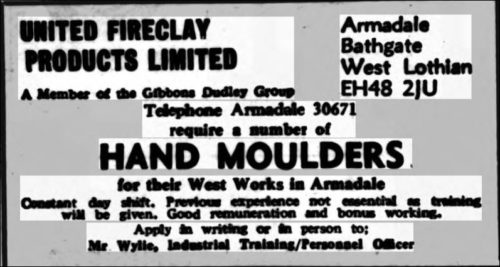 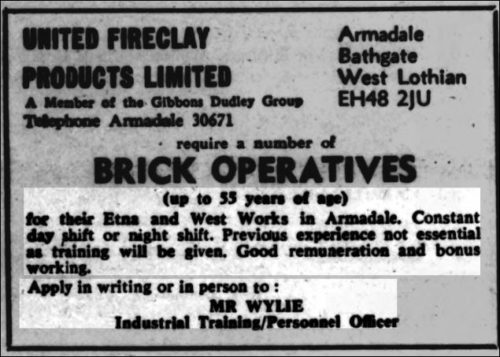 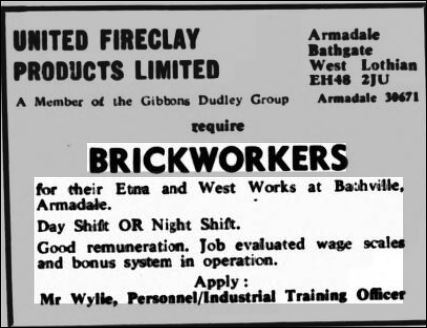 1981 – 1983 – The 1985 publication ‘A survey of Scottish brickmarks’ suggests that Steetley Brick operated the works during this time.