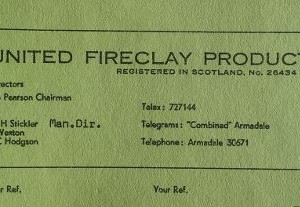 Info – www.armadale.org.uk – United Fireclay Products, Etna Works. Armadale, Bathgate, West Lothian, EH48 2JU –  a member of the Gibbons Dudley Group producing firebricks and shapes, high alumina bricks made of carbonaceous shale by stiff-plastic pressing. Fireclays are obtained from mines near the plant, crushed by rollers and ground in 11ft diameter pan mills. screened and pressed in stiff-plastic toggle, impact. or hydraulic presses. They are fired in either the tunnel kiln or the shuttle kiln, both natural-gas-fired. The building brickworks. (Etna Works, Bathville. NS 944679) was formerly a large fireclay works and has two 10-chamber, one 16 chamber,  and one 28 chamber continuous kilns. As with Flettons, no additional fuel is needed after the bricks have been brought to red heat because of the natural fuel content of the clay. In 1976 a 90-ft-high shaft kiln was installed to produce pre-fired clay granules for refractory concrete and for blending with the raw fireclay. It is the largest of its kind in the United Kingdom. Source

United Collieries Ltd was formed in 1898 to amalgamate 9 collieries and a further 23 collieries were added in 1902, among which was James Wood Ltd with Robertson, Love & Co brickworks subsidiary. The capital of the group was £2 million, a very large sum. Among the companies amalgamated was the Glasgow Iron and Steel Company of Clydesdale and Calderbank, who after the nationalisation of their steel interests were to become one of the largest brickmakers in Scotland in the 1980s.

Robertson, Love & Co were liquidated in 1916 but continued to make firebricks as part of United Collieries Ltd. When coal was nationalised in 1947, the brickworks were reorganised as United Fireclay Products Ltd. and comprised the Etna and Atlas Firebrick Works, the Bathville Pipe Works, the UNICOL Tile Works, all at Armadale and the Brownhill building brick works at Clelland, Lanarkshire. The chief refractory brands were Etna 933% alumina), Atlas (38% alumina), and Atlas A (42% alumina), all based on local fire clays. The Bents Mine near Stoneyburn supplied an excellent 42% alumina fireclay from which the Mars brand was made, but the fireclay was worked out and the mine closed in 1929. The Drum Mine near East Whitburn took over and the Northrigg No 7 pit supplied fireclay for pipes and some coal. The Tippethill Mine (38% alumina, 2.5% iron) replaced the Drum Mine in 1960 and the Pottishaw Mine replaced Northrigg in 1963.

Woodall – Duckham bought United Fireclay Products Ltd in 1957 to secure their source of fireclay shapes for gas retorts. The modern West Works was started in 1960 with a 400-foot tunnel kiln. Heathfield & Cardowan Pipeworks Ltd was bought in 1968 and at that time the Company was at its largest capacity, employing about 600 men and women. Demand for pipes fell due to competition from plastic pipes and the Bathville Pipe Works was closed in 1970. Lower demand for refractories led to the Etna works being converted to make building bricks under the Etna brand and the closure of the Atlas Works in 1973. The Company had again changed hands being bought by the Gibbons Dudley Ltd for £715,000 in March 1971. As refractory demand fell further the Company was bought by Steetley Ltd in 1981, who changed the West Works into a facing brick works and sold the Etna and Brownhill Works to GISCOL Ltd.

Before all these changes the Company had earned a high reputation for their firebricks and then high alumina bricks which they developed in the post-war period. James Smith was the managing director during this period with John McWilliam as his technical director. Smith was followed after his death in 1976 by Bill Stickler, then by Graham Pearson. Source The Scottish Refractory Industry 1830 – 1980.

06/05/1899 – Dundee Advertiser – The first meeting of the shareholders of the United Collieries Company Limited was held at the Merchants Hall, Glasgow yesterday … The directors had found that the manufacture of the bricks at Wellshot was very remunerative and they resolved early in the year on the erection of an additional kiln, which had practically doubled the output which was now about 30,000 bricks daily. 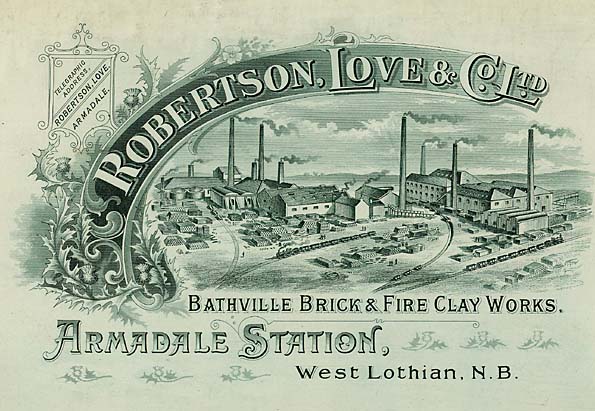 04/02/1903 – The Scotsman – There has been lodged the agreement between the Collieries Consolidation Syndicate Limited of Suffolk House, Cannon Street, London and the United Collieries Limited, Glasgow, for the purchase by the latter of certain collieries in Lanarkshire and leases of coalfields, fire clay and brickwork sand railway waggons at £2,444,945 …

29/03/1946 – West Lothian Courier – Death of Mr John Finlay, managing director of United Collieries Ltd. The death occurred at his residence Wyndwood, 38 Glasgow Road, Uddingston on Tuesday of Mr John Finlay, managing director of the United Collieries, Ltd. Mr Finlay had been indisposed for two or three months over the new year period but recovered sufficiently to enable him to return to business a few weeks ago. He visited the offices and works of the company at Bathville as recently as last Thursday but became ill again and in the end, his death came somewhat suddenly. A native of Law, Lanarkshire Mr Finlay started work as a pit bo in the district and from the first, he showed himself to be of a studious disposition. As a result, he steadily worked his way up until be became manager of Kingshill Colliery, owned by the Coltness Iron Coy., Ltd. Later he was appointed manager of the Edinburgh Collieries, Ltd, a position which he held for nearly ten years. Mr Finlay joined the United Collieries, Ltd., as general manager, in 1927, and ten years later became managing director of the Company. A past president of the Mining Institute of Scotland and a representative on the Council of the Institution of Mining Engineers, he was a well known figure in the coal trade and was regarded as one of the leading personalities in the industry in Scotland. Mr Finlay was also well versed in the pipe and brick making industry, and only a short time ago he launched a new scheme for tile making. Under his direction, a new work was built at Bathville, Armadale for the making of glazed tiles and slab fireplaces and it is a tragic circumstance that he has not been spared to see in full production a venture which was a striking example of his initiative and enterprise. Lately, he was also instrumental in the taking over, by the Company, of a drain tile work at Auchenheath, Lesmahagow.  Actively concerned in various branches of the industry to the very end, Mr Finlay took a deep interest in and was a source of much encouragement to young mining students who sought to pursue the study of the science of mining and to them his own experience was of invaluable assistance. He was deeply interested, too, in the welfare schemes associated with the industry, while the interest he also manifested in the activities of other social organisations was recognised by his appointment, by several of them. as honorary president. A keen sportsman, Mr Finlay’s favourite pastime was golf. He also interested himself in football, with Celtic F.C. as his favourite club. He had a wide circle of business associates and friends who held him in high regard. He paid frequent visits to the Company’s offices at Bathville and was highly respected in the Armadale district. For several years, Mr and Mrs Finlay with their family, resided at Bedlormie House, near Blackridge, but took up residence in Uddingston some years ago. He was 60 years of age and is survived by his wife. a son (Dr Finlay) and four daughters, to whom deep sympathy has been extended in their bereavement

Below – 19/07/1957 – The Glasgow Herald – United Fireclay results and an offer from Woodall Duckham. 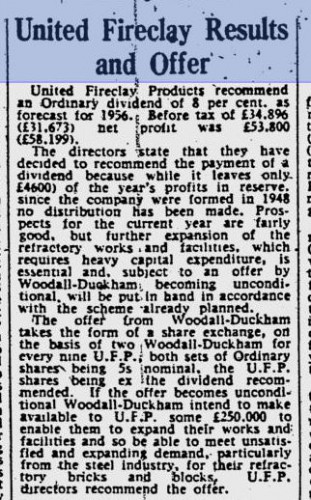 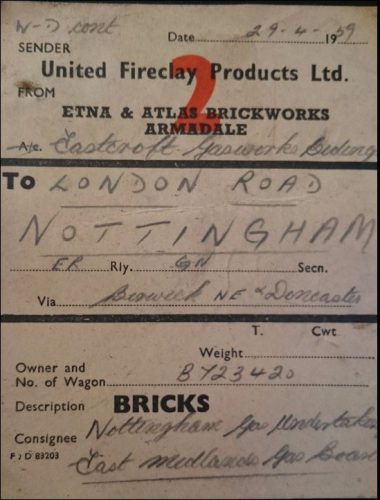 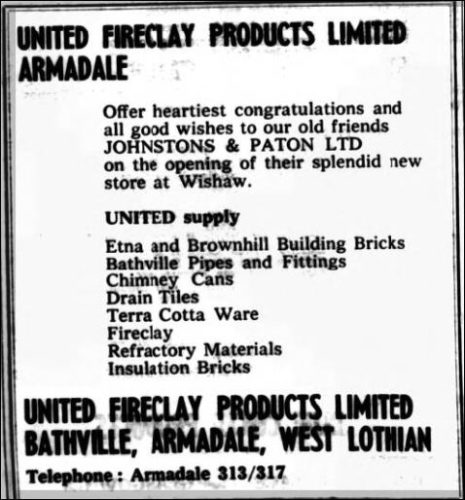 1976 – Brick and Clay Record December – United Fireclay uses shaft calciner to meet refractory raw material needs – High fired fireclay aggregate for refractory brick and specialities prepared in a shaft calciner. Unit is the largest of its type in the UK. Both refractories and brick are manufactured at the plant site midway between Edinburgh and Glasgow, Scotland.

The use of increasing amounts of grog and pre-fired clays for monolithic refractories and in regular brick production, coupled with improved manufacturing techniques that produce less rejects, has created a higher demand for calcined materials. United Fireclay Products Ltd., a member of the Gibbons Duddley Group, placed a shaft calciner on stream which is considered to be one of the largest and most sophisticated of its type in the UK.

Fireclay is screened and graded at the mine and transported by truck to the kiln, It is elevated to the top and is progressively fired up to 2650F and cools as it falls by gravity down to the bottom discharge. The output of the 90ft high kiln is about o.5 tons per hour.

The production at Armadale, West Lothian location consists of fireclay brick and shapes, high alumina brick, monolithic refractories and building brick. High alumina brick are made mostly from imported bauxite and calcined flint clay. The materials are crushed, screened and ball-milled as necessary in the high alumina crushing plant. Fireclay bricks and shapes are made mostly from local clays obtained from near the plant using underground mining. These materials are crushed prior to storage, using a roll crusher. Large 11-foot diameter pans and screens are used to size raw material for production. Fine materials are handled in a pneumatic blowing system.

Several types of presses are used in production. Stiff plastic presses, mechanical toggle presses, impact presses and hydraulic presses are all used to manufacture the many sizes and shapes. Double shaft mixers, mulled mixers and a high intensity counter current mixer are used in the various operations prior to pressing.

A tunnel kiln and shuttle kiln using natural gas for a prime fuel are used for firing. Cars are unloaded by forklift, then sorted, palletized and shrink filmed for shipment.

Building brick are also produced at the plant site. The clay, which contains appreciable carbonaceous material, is pressed by stiff plastic presses and stacked into setting cubes. Lift trucks are used to load the 4 continuous kilns. 2 of the kilns have 10 chambers, 1 has 28 chambers and the other 16 chambers. After ignition, no additional fuel is needed in the process because of the natural fuel in the brick. Unloading also is by lift truck. Shipments are made in both banded packages and loose truckloads to local markets. 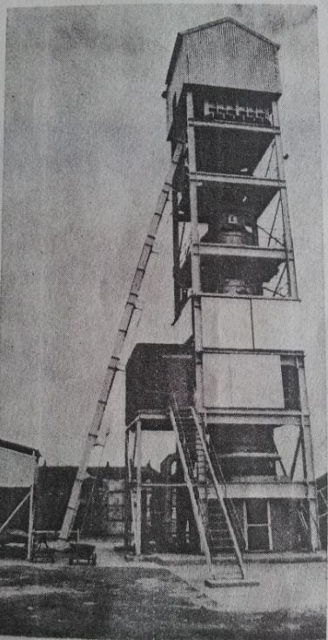