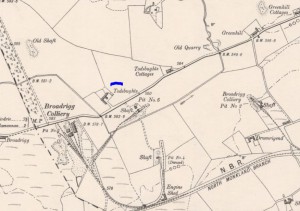 Company history: The works came into existence during the last quarter of the Nineteenth Century. They were on the property of a Mr John Watt. However, they were owned by Messrs. J. & J. Findlay. Source – Falkirk Museum

07/02/1884 – Stirling Observer – Before Sheriff Gloag and a jury on Monday, William Clark, miner, aged about nineteen, residing at Roughrigg, New Monkland, was charged with having on New Year’s day, on the public road leading between Todsbughts and Slamannan, and at a point about eighty yards to the westward of  Wester Greeubill Farm, assaulted John Findlay, brickmaker, Todsbughts, by striking him several blows on the face with his fist, and striking him with a stone, whereby the sight of his right eye was permanently destroyed. The offence was aggravated by a previous conviction of assault committed on 13th September 1883. He pled not guilty. The evidence showed that Findlay was driving along the road when some boys called out “names” to him. He jumped off the cart and caught hold of Clark, and whilst the two were scuffling together, a stone was thrown by someone, which struck Findlay on the eye. The jury, without retiring, found the charge not proved and the accused was dismissed.

15/07/1893 – Falkirk Herald – Man committed to the asylum. Last week a labourer named James Connor was apprehended at Slamannan on a charge of having seriously assaulted John Finlay, brickmaker, Todsbught Brickworks, Slamannan. It appears that Connor, on the day named, had entered Finlay’s house in a seemingly excited state, and on Finlay endeavouring to close the door against him Connor assaulted him first with his fists and then with a poker, with which he inflicted somewhat serious wounds on Finlay’s head. The prisoner, who had wrought with Finlay for about six years, had been previously on good terms with him. Connor was conveyed to Falkirk, where on Friday he was brought before Sheriff Scott-Moncrieff. The Sheriff ordered an examination to be made to the accused’s mental condition and Dr Fraser subsequently certified him to be of unsound mind. He was committed on Friday to Larbert Lunatic Asylum.

Below – 1896 – Todsbughts, Slamannan (but the brickworks are not identified). 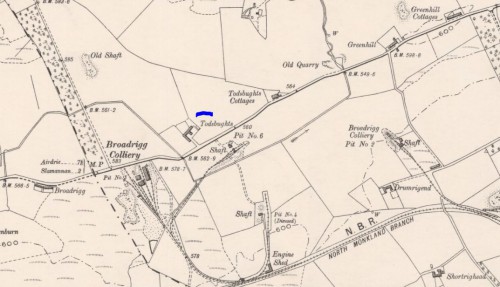