30/09/1933 – The Scotsman – Prospect of a new industry. Recently a proposal was made that the shale refuse bings, which are an eyesore in many districts in West and Midlothian, should be planted with trees. An effort is to be made by Scottish Oils (Ltd) to put the bings, or part of them, to a better use. Some years ago the refuse was used at Linlithgow to make bricks. The scheme met with a. measure of success, but it was found that the bricks did not stand up to the weather sufficiently to make it a commercial success. Scottish Oils (Ltd) took the matter up some time ago, and it is believed that they have been successful in eliminating the earlier faults and can now produce bricks which will prove as good as the bricks at present being made from clay. They have stood the test of Scottish weather conditions without showing any defect. In view of this, the oil company is preparing to start a brick-making plant at their Pumpherston Works, Mid Calder. If the scheme meets with the success expected it may lead to the rise of a new industry in oil trade districts which have been very hard hit owing to the curtailment of shale mining and oil production.

27/04/1934 – West Lothian Courier – Although the brickmaking plant installed at Pumpherston is not yet in full swing, bricks produced by the plant have been used in building in several parts of the works and have, I learn, been found to be entirely successful. From a builder who understands the properties which go to make a perfect brick I learn that the type of brick which will be produced at Pumpherston compares favourably with any at present being marketed 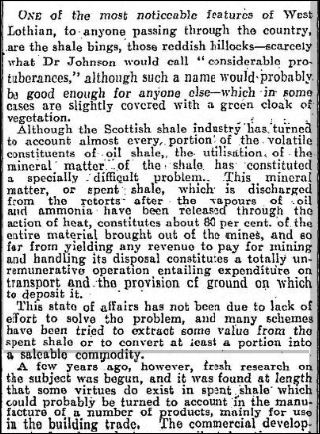 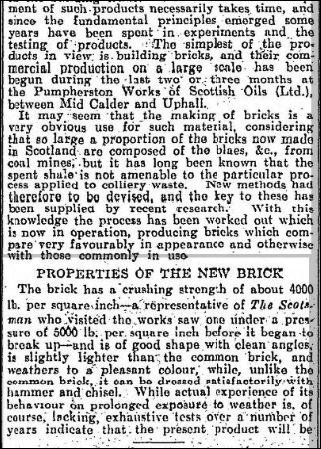 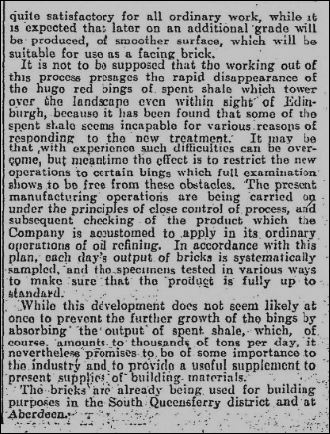 07/02/1936 – Linlithgowshire  Gazette – While on the subject employment, it is interesting to note that this industry has played its part in easing the unemployment problem during recent years, and at least 1000 workers are engaged by Scottish Oils (Ltd.) under what is known as the spread-over scheme. In accordance with this plan, instead of employing a small number of men continuously, the workers under the scheme, 1000 in number, are given three weeks of work each month. In addition, the development of new industries associated with the oil business has been able to absorb further labour. An interesting example of that is the manufacture of bricks side-line, which has been taken up in recent months by Scottish Oils (Ltd.). It is well known that the quantity of oil extracted from the shale is only a comparatively small fraction of the material mined, a fact which is shown by the existence of the numerous spent shale bings. Until recently this spent shale was a waste material, but after lengthy research, it was discovered that this waste had excellent adhesive qualities and that high standard bricks could be produced from it. The company are now manufacturing thousands of these bricks every day for buildings of all types, and when put to the test has been found that the bricks have a crushing strength twice as great as the common brick. This is only one of a number of developments, as other spent shale products are in view. 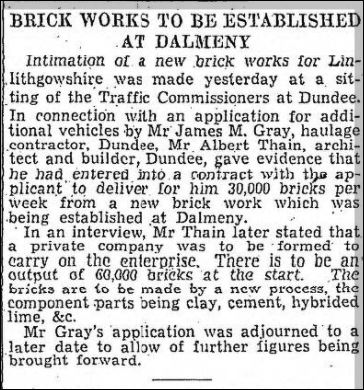 31/12/1937 – Midlothian Advertiser – When the new industry eas established at Pumpherston for the manufacture of bricks from spent shale there was at first a prejudice against the new brick on the part of builders and this hampered sales for a time. This has been completely overcome and there is now no difficulty in disposing of all the bricks which can be produced. They are being freely used in the various housing schemes in teh Lothians and are proving very satisfactory. A quantity of spent shale was shipped to Sweden and is used there also for brick making. The Swedish brick is manufactured by a different process. It is very porous and is lighter than the Scottish brick. The Scottish made brick has been successfully put to exacting tests for withstanding pressure.

29/01/1938 – The Scotsman – Huge shale bings in the Dalmeny and Broxburn districts, it is predicted, will shortly be utilised for the manufacture of bricks which are in great demand for housing schemes throughout Scotland. A large new factory to manufacture bricks from shale has just begun production after months of experimental work at Dalmeny, and it is estimated that the factory will soon be able to make 8000 bricks daily from the refuse shale.  The factory is situated alongside a bing formerly belonging to Scottish Oils. Ltd. The basic material for the bricks is scooped from the bing by an electrical grab, and after various processes off sifting and grinding, the rough brick is formed. Later it is dried and hardened. The new brick from shale product is of a dark red colour.

29/01/1938 – Dundee Courier – Dundee firms new enterprise – Unsightly shale bings of West Lothian are being converted into bricks for house building by a Dundee firm, Albert Thain,  Ltd.,  joiners and builders, 76 High Street. The district where this operation is taking place is that of Dalmeny and Broxburn and a factory is now producing bricks at the rate of several thousand a week. Production is expected to increase in the near future. A few thousand are brought to Dundee each week for Messrs Thain’s own use. Material for the bricks is scooped from the bing by an electrical grab and after various processes of sifting and grinding the rough brick is formed, dried and hardened. It is of a red colour. This manufacturing enterprise is the result of months of experimental work. 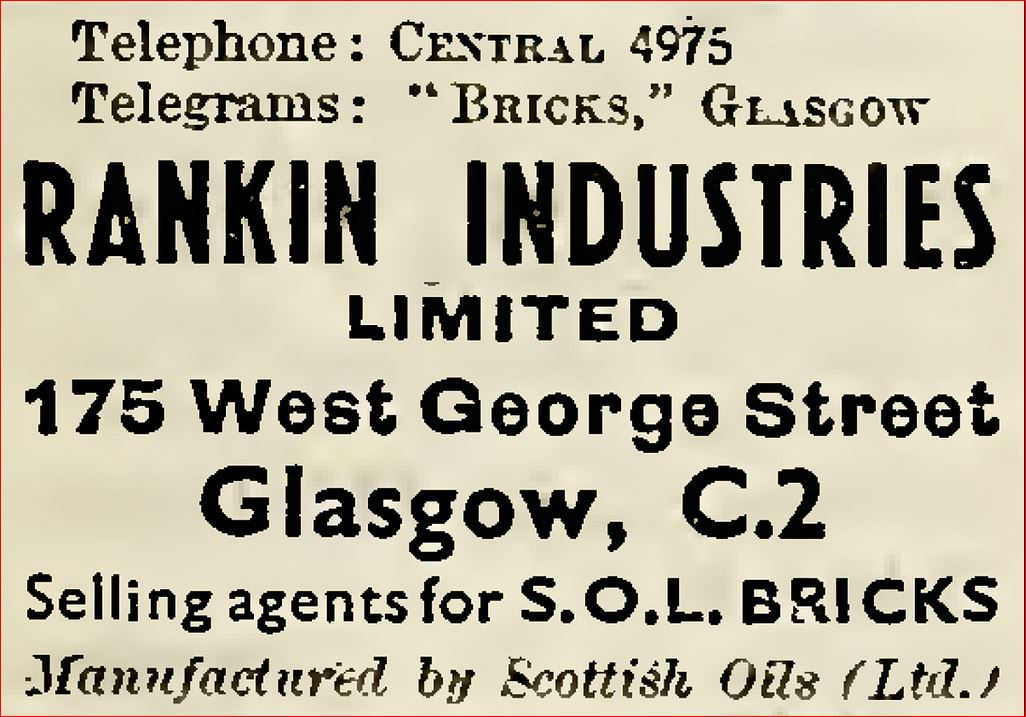 25/05/1945 – Linlithgowshire Gazette – Some of the causes of delay in house building were revealed at the meeting of the County Council Housing Committee on Tuesday. There it was stated that houses at Winchburgh are being held up because of a shortage of bricks. The convener stated that there were a million and a half bricks at Pumpherston, but under present rules, these cannot be used for Winchburgh as the Ministry specify that brick from Edinburgh must be used. Accordingly, the houses at Winchburgh must wait and the bricks at Pumpherston must lie idle. We have heard complaints that the Pumpherston bricks are oily and so are not favoured by builders, but Bridgend Village is built of them so one assumes there cannot be much wrong. In any case in times like these ones would think that bricks from anywhere would be welcome. The saving in cost of transport by using local bricks should also amount to something worth considering. If bricklayers can be induced to lay 800 bricks per day as was demonstrated to be possible last week then the gap between an economic rent and the cost of the house would be further reduced. This apparently stupid action on behalf of the Ministry is fairly typical of a good deal of Government control. Yet people cry out for more of it. Its a case of a fine theory not working out in practice.

23/05/1947 – Midlothian Advertiser – Calder notes. On the radio the other evening I heard a report that the scarcity of bricks and steel is holding up the erection of factories in the development areas and one wonders how such a statement could be made when bricks, suitable for such work, are plentiful at the brickworks at Pumpherston. At these works stocks are at present high and production has been slowed down in consequence, so while steel may be in short supply, bricks are certainly not as scarce as the report would lead one to believe.

May 1962 – Shale Mines Close –  Brickworks continue. The oil shale mining industry in the Lothians source of valuable brickmaking materials now being used extensively in this area will close down in the very near future.  But brickmaking will be continued.  This was announced by Mr John Caldwell, managing. Director of Scottish Oils Ltd. On April 3.  The industry is 106 years old and was the basis of a major growth of scientific and industrial development in the central Scotland area in the 1850s.  It employed 12,000 men at peak growth in 1914 but has been declining since under the impact of high costs.  The Government allowed a preference on the home-produced oils, but this brought in less than £500,000 in a year.  Now the Government has indicated that this preference will be withdrawn by 1964 at the latest and will not be replaced by subsidy.  To anticipate the inevitable decline and close down the company is now releasing about 1,000 workers, closing the main oil shale pits and mines and various allied works. But the Pumpherston refinery will continue to refine crude oil from the Nottingham oilfield and certain other activities will be maintained for the person at least.  Among these is the manufacture of bricks.  These have been made for many years in this area using the spent shale as a source of raw material combining the virtues of this waste, often reclaimed from the older brings, to good advantage.  In their statement on the development, Scottish Oils say that the continuing activities will employ some 450 out of the 1,750 still remaining. Clay Worker Magazine.

July 1970 – Pumpherston J. W. Midlothian Scottish Oils Ltd. Last surviving brickmaking links to the great days of the shale oil firms.  50 men opened the works in 1933 to utilise waste material produced by the shale oil industry which at one time was a major industry.